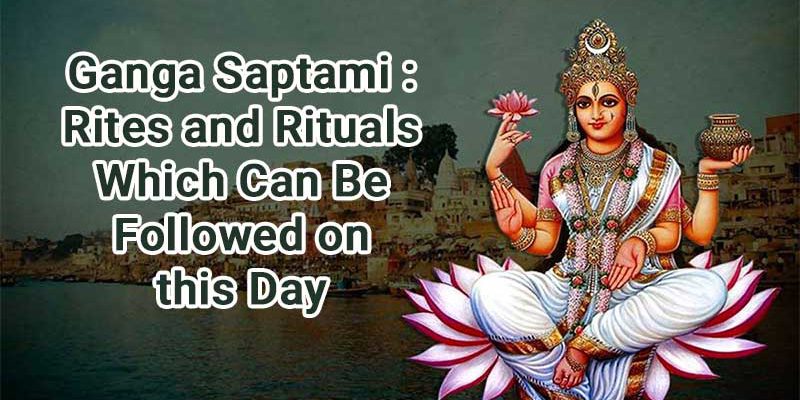 Natives in India usually take tips in the holy Ganges during any auspicious occasion. This tradition is believed to usher in prosperity and happiness. In many joyous occasions like Ganga Saptami, Ganga Aarti is performed by the riverside. Also, there is quite a great significance of donating lamps(Deep Daan) on the day of Ganga Saptami.

The Saptami Tithi of Shukla Paksha during the Hindu month of Baisakh will be celebrated as Ganga Saptami. It is specially celebrated in the Northern part of India. In the current year, the festival will be observed on  Thursday, 30 April. However, since the entire country will be under a nationwide lockdown until the 3rd of May, we will provide you with some easy rituals to carry out on this day at your home. So, keep reading this blog to know some interesting insights about this day.

There is a belief about this festival, that on the Saptami Tithi of Shukla Paksha of Vaishakh month, the river started originating and flowing from the ear of Janhu Rishi(a sage named Jahnu). Having been born as the daughter of sage Janhu, Ganga Devi also came to be known as Jahnavi.

There are many legends associated with the birth of goddess Ganga.   According to one such legend, the river Ganga (which means the Goddess) came into existence from the drops of sweat of Lord Vishnu’s feet. Another one states that manifestation took place from the Kamandal of Lord Brahma( it was a vessel carried by him which consisted of holy water).  Beliefs  also say  that Lord Brahma washed the feet of Lord Vishnu so as to free the world from the terror of a demon named Bali and filled some of the water in his Kamandal. This is how the river Ganga came into existence.

A king named Bhagirath made the necessary efforts to bring the river Ganga on to the earth.  It is believed that the river started flowing in the earth on account of the efforts made by this particular king. It has also been said that a Sage named Kapil executed 60000 sons of the king and he performed some severe austerity to get them back.

It was all due to Bhagirath’s penance and austerity that the river Ganga started flowing in the realms of the earth too. But, her rapid flow had the ability to bring some avalanches to this world, which is why Lord Shiva only could control her flow.

King Bhagirath pleaded Lord Shiva to do the needful. It was then Lord Shiva controlled the pace of her rapids with the help of his dreadlocks( Jata) and sent her to reside on Earth as well.  Later on, the king immersed the ashes of his ancestors in the river which provided him with salvation.

The manifestation of Goddess Ganga took place during the Saptami Tithi only.  On this very day, she reached and found a place in the dreadlocks of Mahadev and finally settled on earth. This is the reason why there is a special significance of commemorating the Ganga Puja on this particular day.  It is believed that whosoever takes a dip in the holy Ganga on Ganga Jayanti witnesses the sins getting washed away from his/her life.

Now, under the situations that we are currently living amidst the lockdown, it is not quite possible to travel and  go for the holy bath in the river. Taking note of the situation, we advise the natives to add some drops of Gangaajal in their bathing water. Taking baths in such a manner will also help people to get rid of their sins. Consequently, happiness and prosperity also find a place in your life. Apart from this, if any person is inflicted with Mangal Dosha in their respective Kundli, then this particular ritual can help them to get rid of this Dosha and acquire many other benefits.

On the day of Ganga Saptami, natives in regular circumstances wake up early in the morning and take dips in the holy river. However, as we are well accustomed with the pandemic scare that is going on, we advise you to follow the ritual which has been mentioned above.

You can add some Gangajal in your water which is meant for bathing. Later on, you can start worshipping the Goddess. Perform the Aarti of Devi Ganga.

Deep Daan on the Day of Ganga Saptami

There is also a tradition of lighting lamps on this day and putting them in the flowing waters. If it is not possible to do so, then you can light some lamps at your own house. Later on, recite the Gayatri Mantra and the Sahasranama Stotram.

There is a significant amount of importance given to Goddess Durga and as it is considered to be extremely pious and auspicious. Needless to say, her Puja is also of great significance to us.

As per the Hindu religion and culture, any native who takes a dip in the holy river in his/her lifetime, gets freedom from all of his/her sins, not only of the present, but also of the past. Apart from this, if the last rites of a person are completed near the river Ganga, then he definitely achieves Moksha/salvation.

Those natives who remain under the influence of Mars should definitely worship Goddess Ganga, as it helps them to remain at the receiving end of extremely favourable results.

On the day of Adi Shankaracharya Jayanti, Puja Havan etc. are organised in temples and religious shrines. On this day, followers and believers of Sanatan Dharma organize special programs and celebrate this day with great zeal. Processions are also taken out in many places on the day of Shankaracharya Jayanti which includes the participation of a large number of devotees. They are seen performing Bhajans and Kirtans during the Shobha Yatra.