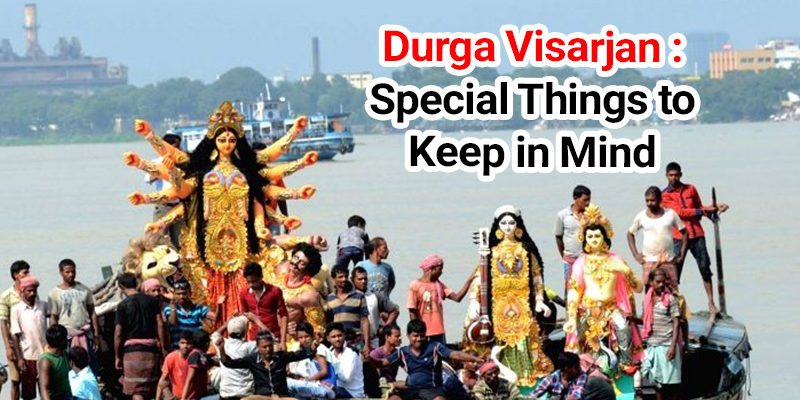 The pious occasion of Navratri comes to an end with the event of Visarajan. Once the Durga Visarjan is over, many people complete the Paarna of the Navratri fast. Post this only, the festival of Navratri is celebrated. It has been said about this day that Lord Rama killed Ravana on this very day and Maa Durga also slayed the demon Mahishashur on this day itself.

With this article of ours on Durga Visarjan, we would let you know about the Shubh Muhurat for Durga Visarjan. Additionally, we will also provide the details about the day’s significance and the rites and rituals to follow on this day.

It should always be kept in mind that Durga Visarjan should never be commenced on Navami Tithi. The 9 days of Navratri are dedicated to different incarnations of Maa Durga. In the same order, the ninth day is dedicated to Goddess Siddhidatri, the ninth and the last form of Maa Durga. Although many people perform the Durga Visarjan on this day, due to which the worship of the Maa Durga remains incomplete during Navratri. Therefore, the idol of Maa Durga should always be immersed(the actual act of Durga Visarjan) on the tenth day i.e. on the day of Dussehra.

Before moving forward, we should also let you know the correct Puja Vidhi for Durga Visarjan which can help you earn the blessings of Maa Durga.

Navratri ends with Durga Visarjan. For nine days people worship the same Durga idol with full devotion and then the same idol is immersed in water. Such an act of courage is found only in Sanatan Dharma only, because Sanatan Dharma believes that form is only the beginning and perfection is always formless. Now let’s go ahead and know the Mantras to keep in mind, which must also be included in the Havan before the Visarjan.

Mantras to Recite Before Durga Visarjan

In this segment of our blog, we will let you know about the modes of conveyance of Goddess Durga this year. This year, Navratri started on Thursday, October 7, 2021 and will end on Friday, October 15, 2021.

According to Hindu scriptures and beliefs, different vehicles of Maa Durga have their own importance on Navratri every year. It is mentioned in the scriptures that when Maa Durga comes riding on a Doli or palanquin, political upheaval starts to surround the country. This situation can be seen not only in India but all over the world. Apart from this, when Maa Durga arrives on a Doli, it can be a sign of an upcoming natural calamity. The possibility of the further spread of the pandemic increases and the number of people getting sick may also increase. The arrival of the mother on a Doli is not considered a very auspicious sign, but it does not have any effect on those who worship Goddess Durga with a sincere heart. Worshiping Maa Durga during Navratri always ensures her blessings upon her devotees.

On Sunday and Monday Maa Bhagwati comes on an elephant. She rides on a horse on Saturdays and Tuesdays. On Thursday and Friday, she rides a Doli and on Wednesday she comes on a boat.

If Maa Durga comes on an elephant, it brings good rain. If she comes on a horse, then there arises a war between the kings. Her arrival on a boat brings success in all the tasks and if the mother arrives on a Doli, then in this situation, many people die due to many reasons.

The day of Durga Visarjan in a week is seen as the homecoming of Durga Mata. In such a situation, if Maa Durga returns on Wednesday and Friday, it is believed that she lives on an elephant. The return of Goddess Durga on an elephant is considered auspicious and this year, as the Goddess is leaving on Friday, it can be believed that the time will be favorable for the farmers in the coming year. There will be plenty of good rains for bumper harvesting and it will bring happiness, peace, and prosperity to everyone.

Significance of Sindoor Khela on Dashami

Different traditions have been followed for years on the day of Durga Visarjan, which have not lost their relevance even today. One of these traditions is the tradition of Sindoor Khela. During this event, married women pour vermilion on each other and pray for the long life of their spouse and the blessings of Goddess Durga in their lives. Apart from this, on this day women congratulate each other by applying vermilion and wish for tons of good luck for one another.

The tradition of Sindoor Khela is an important event for Bengali culture and society. It is believed that Maa Durga comes to her maternal home once a year and stays here for 10 days and this occasion is celebrated as Durga Puja. Apart from this, it is said that this tradition of Sindoor Khela has origins mainly in West Bengal and parts of Bangladesh and dates back to about 450 years ago. In such a situation, it is believed that applying vermilion upon one another can bring good luck and prosperity.

Water, as per the Hindu Puarnas or mythologies is symbolised with Lord Brahma. Water is considered as the beginning, middle, and end of the universe. Perhaps this is the reason why Tridevs (the three lords Brahma, Vishnu and Mahesh) also reside in water, that is why water is also used for sanctification in any worship. According to mythological beliefs, the reason behind immersing the idols of Gods and Goddesses in water is that, even though the idols of Gods and Goddesses dissolve in water, their souls directly get conjoined with the supreme one. Due to this importance and belief, idols of Mother Durga are immersed in Durga Visarjan and idols of Lord Ganesha are immersed in Ganesh Visarjan.

Most natives break their fast after the immersion of Durga idol. After this i.e. after Durga Visarjan, the holy festival of Dussehra begins, which is celebrated with great pomp and show all over India. It is said that Lord Rama killed the arrogant Ravana on his own day itself. Also it is the same day on which Maa Durga killed Mahishasura as well. The worship of Shami tree on the day of Vijayadashami has been given special importance.

Special Rules of Durga Visarjan to Keep in Mind

If you see Goddess Durga in your dream during Navratri, then it is considered very auspicious. If you see the Goddess smiling in red coloured clothes during the Navratri, then there is an indication of something positive happening in your life. It can prove to be auspicious with regards to various fields of ​​your life. Unmarried people can hear wedding bells. On the other hand, married people can get the happiness of a child. Apart from this, people who are unemployed or looking for a job can also get good news in this context.

On the other hand, if you see Maa Durga in a dream in which her lion is roaring, then this can indicate problems. In such a situation, you are advised to appease Goddess Durga by worshiping her so that your problems can come to an end.

Goddess Lakshmi also occupies a special place when it comes to the dream sequence in Navratri. If you see Goddess Lakshmi in your dream during Navratri, then it is considered to be a symbol of happiness and prosperity. It is said that seeing Goddess Lakshmi can be a sign of financial prosperity. Not only this, it is also a profitable sign for business persons.

According to the interpretation of dreams, if you see Goddess Bhagwati riding on a lion in your dream, then good news is awaiting you. It means that the bad times going on in your life are coming to an end now and you will see the face of happiness and prosperity.

On the contrary, if you only see a lion or a tiger roaring at you in your dream, then it is not considered auspicious at all. In such a situation, reciting the Durga Chalisa or Durga Saptashati can prove to be fruitful because lions and tigers are considered to be the vehicles of Goddess Durga and they being angry is certainly not a good sign.

It is also considered very auspicious to see Maa Parvati in a dream during the nine days of Navratri. Beliefs and scriptures consider this to be an indication of success. Apart from this, if you are associated with the field of education or business, then your chances of getting progress in this field also increases to a great extent.