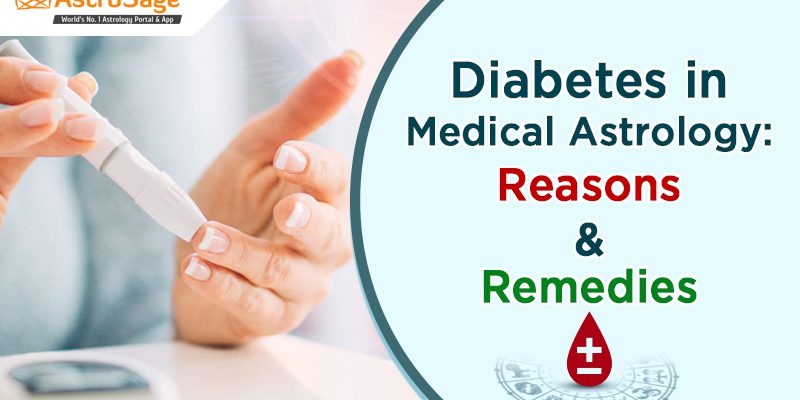 Diabetes is known to be a medical condition where the blood sugar or blood glucose in your body rises and becomes too high. The main reason behind this disorder is our body’s inability to create or properly utilise the hormone insulin. This hormone is responsible for the movement and distribution of glucose from your food, and when it does not complete its function properly, one is said to be suffering from Diabetes or more commonly, ‘high sugar’. High level of glucose can become deadly overtime as it affects all the other major organs inside our body. While unhealthy lifestyle and eating habits, or even our genes, are often the reasons behind this disease, however, sometimes, the planetary positions in your birth chart can also be the cause behind this disorder. With this blog, we will discuss the probable astrological reason of Diabetes and their remedies.

Our genes or our lifestyle and habits can put us at risk of suffering from Diabetes, but sometimes, our birth chart (kundli) can also reveal the hidden reason. Let us discuss the possible planetary positions and conjunctions that can make you a possible diabetic. Here are the astrological reasons of Diabetes:

According to astrology, if Jupiter is posited in the sixth, eighth, or twelfth house of a zodiac sign in its debilitated form, then such a native can become diabetic in his/her life. Alternatively, if the planet is posited in a trine house (first, fifth, or ninth house) in a retrograde state or being afflicted, then that could lead to the person suffering from diabetes as well.

If the planet Saturn is in conjunction with the Moon in the birth chart, then such a person can turn out to be diabetic. In addition to this, if the planet is aspecting the zodiac sign Cancer, then such planetary positions too can result in the native having to suffer from diabetes.

In such a situation where Jupiter is posited in the Saturn’s zodiac sign or constellation (nakshatra) and a malefic planet is aspecting it, then this can be a cause for the native being inflicted with high sugar (glucose) level. Another reason of this disorder can be the aspect of Saturn on Jupiter in the native’s birth chart, or the conjunction of both these planets.

The conjunction of Rahu with the lord of the eighth house in the eighth house or one of the trine houses (first, fifth or ninth house) can give rise to the probability of the native being ill with Diabetes.

As per the native’s birth chart, if any of the lords of the sixth, eighth, and twelfth houses or any malefic planet is posited in the ascendant, and in addition to this, any two planets from the Moon, Jupiter, Ascendant Lord, and Venus are posited negatively and becoming unfavourable due to another reason, then the overall effect of these planetary positions can lead to the person becoming diabetic. Another astrological reason behind this disease can be the presence of inauspicious effects on the native’s eighth house and any two planets from the Moon, Jupiter, and Venus being malefic. Such a scenario can also cause the native suffering from high sugar in their blood.

Astrology is a science based on the ancient Hindu scriptures. It not only offers a way to predict anything bad that may enter our lives, but also suggests methods of avoiding them or remedies to fight our present problems. In the same vein, we have discussed below astrological remedies for people with Diabetes or those who have any of the above conjunctions or yogas in their birth chart.

Chanting either of the following mantras can be beneficial for diabetic people or those who have any of the above yogas in their birth chart:

Offering food to brahmins on a Thursday, as per your abilities, gets you their blessings, and in turn, protection from and the ability to fight diseases like Diabetes.

Fasting is a spiritual act according to Hinduism which is said to purify our mind and body and also helps us in acquiring divine grace. If a native is suffering from Diabetes or has any of the above yogas in his/her birth chart, then fasting on Thursdays with the proper religious rituals would prove to be beneficial for such a person.

The cow, as per Hindu scriptures, is sacred and gives to the humans more than it takes. Feeding jaggery and flour to a brown cow will bring auspicious vibes and blessings, which will help in fighting Diabetes and such disorders.

We hope that this blog helped you and wish you luck and an auspicious future!