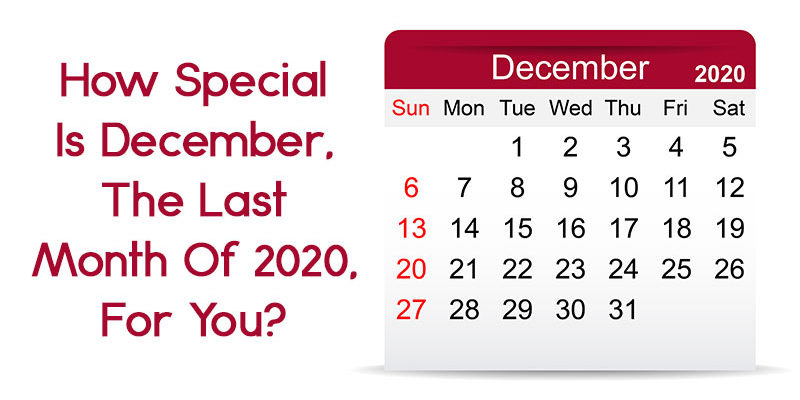 December, the last month of 2020, is about to begin while marking an end to this year. It was not an easy year for everyone, since we have been forced to remain confined within our homes due to the ongoing Corona Pandemic, and till now, the situation remains worrisome.

However, as the year is about to end, people around the globe are hoping to get an effective vaccine as soon as possible. The introduction of COVID-19 Vaccine simply means that our normal life will be back on track.

So let’s move ahead with this positive idea and know what this last month of the year is going to bring for us. In this article, you will know more about which festival-fast, transit, eclipse etc. will occur in this last month of the year 2020. In our December special article, we will reveal some special characteristics of natives born in the month of December, along with complete information about the fasts, festivals and eclipses, important predictions related to the month and much more.

Our expert astrologers are always ready to serve you to make your life easier. If you want to seek any advice from them or wish to know the answer to any question, then ask questions from astrologers right now and get proper guidance.

Are you looking for a successful life? Raj Yoga Report has all answers!

Fasts, Festivals In The Month Of December

World AIDS Day: The aim of World AIDS Day is to raise awareness regarding the AIDS epidemic due to the spread of HIV infection, and remember those lost souls who have died from the disease.

Kalashtami: On the day of Kalashtami, there is a provision of worshipping Kaal Bhairava, a fierce incarnation of Lord Shiva. The fast of Kalashtami is observed on every Ashtami Tithi of the Krishna Paksha each month. Kaal Bhairava is considered the God of Tantra-Mantra.

Kal Bhairav Jayanti: In Hindu scriptures, Kaal Bhairava is considered as the most prominent incarnation of the Rudra avatars of Mahadev. This is the reason that today Kal Bhairav Jayanti is celebrated as a very holy day by Shiva devotees all over the world.

Utpanna Ekadashi: According to mythological beliefs, it is said that Ekadashi Mata was born on this day, hence it is known as Utpana Ekadashi. Mata Ekadashi is considered to be the source of the power of Lord Vishnu.

Pradosh Vrat: Pradosh Vrat is said to be an extremely auspicious and very fruitful fast. This fast is directly related to Lord Shiva and Maa Parvati. This fast is observed on the Trayodashi of Shukla Paksha and Krishna Paksha.

Masik Shivratri: The fast of Masik Shivratri is said to be highly significant. This festival is celebrated every month on the Chaturdashi during Krishna Paksha.

Darsh Amavasya: Darsha Amavasya is considered auspicious and occurs on the last day of Shukla Paksha. The Moon is not visible on this night. It is believed that it is very easy to please the forefathers on this day, hence another name of this Amavasya is also Shradh Amavasya.

Somvati Amavasya: The Amavasya that falls on Monday is called Somavati Amavasya. It occurs about once or twice a year.

Full Solar Eclipse: Both Solar Eclipse and Lunar Eclipse are considered important in the world of astrology. Any eclipse must have a major effect on our life. This Total Solar Eclipse will begin from 19:03:55 on 14 December to 00:23:03, 15 December.

Vivah Panchami: Lord Rama and Maa Sita were married during the Margashirsha Shukla Paksha. Since then, the tradition of celebrating this day as Shri Ram Vivah Utsav began. In many places, it is also called Vivah Panchami.

Champa Shashti: The festival of Champa Shashti is celebrated prominently in Karnataka and Maharashtra. There is such a belief about this fast that whoever performs this fast is showered with happiness in life.

Shortest Day Of The Year: 21/22 December is the shortest day of the year because on this day, the rays of the Sun fall and remain on the Earth for a short time.

Geeta Jayanti: The holy day of Geeta Jayanti is celebrated throughout the country as the symbolic birth anniversary of Srimad Bhagavad Gita. According to the belief, just by witnessing the Srimad Bhagavad Gita on this special day helps to eliminate all the miseries of life and that person achieves success in every aspect of life/

Matsya Dwadashi: According to Hindu Panchang, Matsya Dwadashi will be celebrated on Dwadashi of Margashirsha Shukla Paksha. On this day, Lord Shri Hari Vishnu took the form of a fish, killed the monster Hayagriva and protected the Veda.

Mandala Puja: In Mandala Puja, Lord Ayyappa is worshipped with utter devotion. This festival is considered special in South India. In this festival, puja rituals are carried out for the entire 41 days. Apart from South India, this puja is conducted wherever the residents of South Indian origin reside in the whole country and abroad.

Rohini Vrat: Rohini vrat is observed by married women for the longevity of their husbands. This day’s fast is also observed for peace and happiness in home and life.

Dattatrey Jayanti: There is such a belief about Lord Dattatreya that by worshipping him, one attains sweet fruits immediately and it also helps in alleviating sufferings. There is a provision to celebrate the birth anniversary of Lord Dattatreya on this day every year.

Margashirsha Purnima: According to Sanatan Dharma, Margashirsha Purnima will be celebrated on 30 December, Wednesday in the year 2020. As per religious beliefs, the Full Moon or Purnima is always considered as a special and sacred date, which falls on the last date of the Shukla Paksha every month.

Transits In The Month Of December

Eclipses In The Month Of December

Talking about Eclipses in the month of December, a Full Solar Eclipse is going to take place this month.

Important Predictions For This Month

Click here to know the details on Indian Holidays 2021

Thank you for being connected with AstroSage!