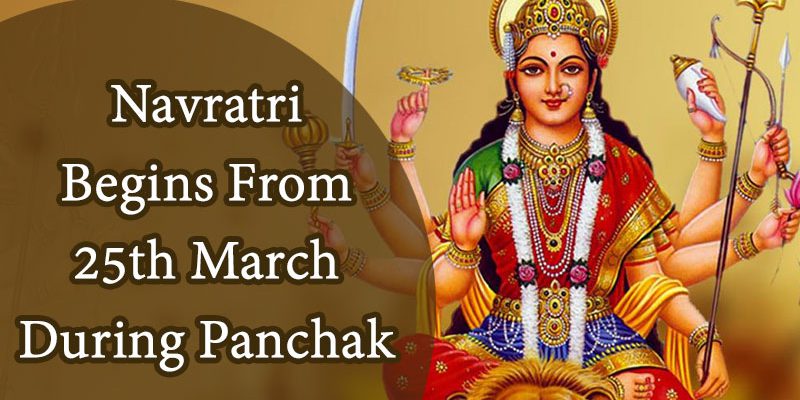 Chaitra Navratri is beginning from the 25th of March. According to the Jyotish Shastras, the Panchak period will also be going on during this time. Various questions will be seen prevailing in the minds of the people as to which activities should be commemorated during the time of Panchak.

Is it the right time to to observe the Puja rituals? Will the rites and rituals observed during this time beget you with fruitful results? Which precautions you should be taking into account in this Panchak duration. All of these questions will find an answer in this blog of ours. Let us now take a look at some special highlights associated with Navratri and the Panchak.

Panchak To Begin Before Navratri

The Navratras are beginning from Wednesday, March 25, while the five-day long Panchak will come into being from March 21. It will begin on March 21, Saturday during the Dhanishta Nakshatra at 6:20 am in the morning, and the Panchak will end on March 26, Thursday in Revathi Nakshatra at 7:16 am. This particular Panchak which begins from Saturday is also known as Mrityu (death) Panchaka and it is considered to be quite fatal and inauspicious. This year, Navratri is beginning while the Mrityu Panchak goes on.

The time period of Panchak is considered to be very inauspicious in the realm of astrology. When it comes to this particular period, a strange fear grips the minds of people. Most of them are usually of the view that any pious activity should not be commemorated in this time duration. However, readers should know that Panchak does not restrain the observation of holy activities. Navratri is the festival, during which the epitome of power or Shakti is worshipped.

It is known to all that all the nine different incarnations of Goddess Durga are worshipped during this festival. People establish urns (Kalash) in their homes in this duration and pray to the Goddess with their pure heart and mind. They are also seen organising Hawans. Hence, Panchak will not remain effective during such an auspicious period, which is why there will be no obstruction in commemorating the rituals of Chaitra Navratri Puja. Having said so, you can go ahead with your preparation and get ready to welcome the Goddess, the epitome of power.

On the beginning of Navaratri during the Panchak period, famous astrologer Mragaank Sharma says, “The celebration of Navratri during Panchak is not a very unusual occurrence. People should not panic about this at all. Navratri is beginning on Wednesday, 25th March. The planet Mercury happens to be the ruling lord of Wednesday, which is also the significator of intellectual abilities and finances. Chitra Shukla Paksha’s Pratipada Tithi also considered to be the beginning of the Hindu religious New Year. In such a situation, natives can acquire a lot of economic resources and wealth on account of their intellect and wisdom. One more special thing to note is  that natives this year will be seen remaining under the influence of economic effects and they will be seen taking interest in materialistic desires this year”

As per the study put forth by astrology, the special yoga formed due to the conjunction of the five Nakshatras is known as Panchak. Panchak is the time which marks the  beginning of Dhanishta Nakshatra and ends with Revathi Nakshatra and it is a time period considered inauspicious to carry out any pious activities.

Read More About – What is Panchak?

Things to be Avoided During Panchak

It is said that any bed or wooden material should not be made during this period. Also, during the Dhanishta Nakshatra during Panchak, you should not collect materials meant for burning like grass, wood etc. Traveling in the southern direction is also considered a taboo at this time, because it is considered to be the direction of Yamraj.

Corona Virus Highlights: An Astrological Take on the Pandemic

When the Revati Nakshatra is going on during Panchak, the roof of the house should not be constructed at that time. It is not right to perform the last rites of a dead person during Panchak. Hence the advice of a qualified ritualist must be taken into account before doing so.