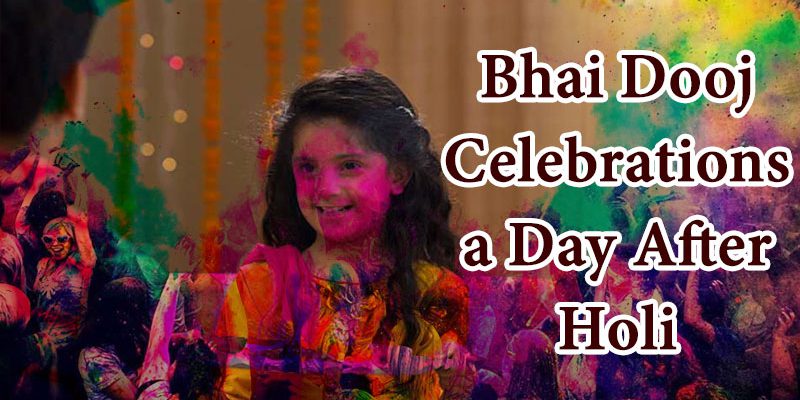 The festival of Bhai Dooj is often associated with Yamraj and his sister, Yamuna. Discover some important facts about this joyous occasion.

Once the celebrations of colours are over, the festival of Bhai Dooj is observed. In Hindu religion and culture, this festival is given a great amount of prominence.

This festival is a beautiful representation of the bond shared by a brother and a sister. Even though it is not widely popular all over India, the very few places where it is celebrated host the festivities with great jubilance.

The Hindu panchang States the festival of Bhai Dooj arrives twice a year.  Amongst the two, one is celebrated immediately after the festival of lights, Diwali and the other one which we are talking about currently is celebrated on the very next day of Holi. It is believed that if female natives apply Tikas on their brothers’ forehead in the Hasta and Chitra Nakshatra during the Dhruva Yoga, then you can come into terms with great amount of prosperity and benefits.

Bhai Dooj which is celebrated on the very next day of Holi. It arrives during the Dwitiya Tithi of Krishna paksha when the Chaitra month is going on. During this year, this particular festival will be observed on Wednesday, 11 March. According to the religious scriptures or Shastras, this festival is also known as Bhadraratri Dwitiya. Holi will begin at 7.25 pm on March 10 during the Dwitiya Tithi of Bhai Dooj and end at 3.30 pm on March 11.

According to Hindu religious traditions and cultures, the sisters of male natives observe fast on the day of Bhai Dooj for the long life expectancy of their respective brothers. They fast for the entire day and wish for the well being of their brothers. However, if it is impossible for you to observe the Nirjala Vrat(fast even after consuming water), then you can observe this particular fast by following a fruit diet. The celebrations take place during the day. Sisters dress up beautifully and decorate their Puja palette and sit in front of their brothers. After this, they apply Tilak on their brothers’ forehead and perform an Aarti. After completing all the rituals, the sisters sit down to break the fast and have their meals.

Why is Bhai Dooj Celebrated on the Very Next Day of Holi?

Usually the Bhai Dooj which arrives immediately after Diwali is popular among the masses, but this particular Bhai Dooj also has its own significance. A legend associated with Holi Bhai Dooj states that the Lord Of Death, Yamraj visited his sister Yamuna on this day. Yamuna applied Tilak on his forehead and made him taste some scrumptious delicacies. Very soon, Yamraj blessed his sister and said that those male natives who pay a visit to their married sisters house on the day of Bhai Dooj and have a meal there will not have to fear from sudden death anymore. It has been said that ever since this day, the tradition of celebrating Bhai Dooj came into existence. Hence, most brothers never forget to visit their sisters’ house to let them apply Tilak on their forehead.

Corona Virus Highlights: All you Need to Know About the Pandemic

Significance of Bhai Dooj According to Shastras

It is often said about this festival that grief and trouble can never touch such a brother who goes to get a Tika/Tilak applied on his forehead and dines at her house on this day. Such brothers need not fear sudden death and many other kinds of unwanted troubles.