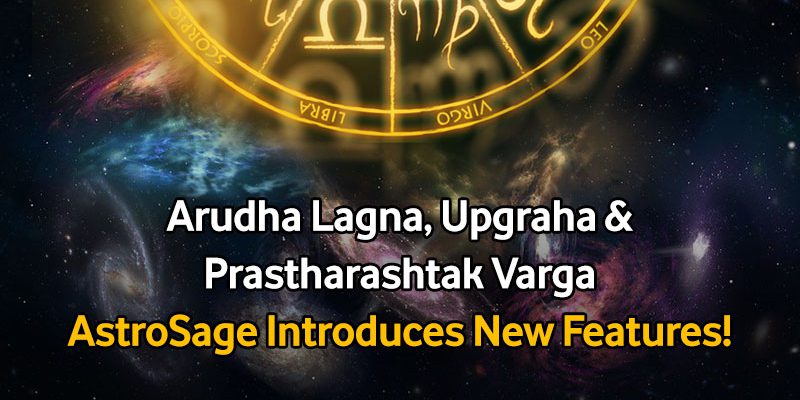 AstroSage.com has always strived in the field of astrology and presented the astro-enthusiasts with new additions and latest tech-savvy features. On this note itself, the Arudha Kundli has been made available in the AstroSage Cloud. It has Arudha Pada for all 12 houses i.e. from Lagna Pada to Upapada.

The Arudha Kundali is used exclusively by astrologers following the Jaimini System of Astrology, and it has proven its significance in offering accurate astrological predictions and results. As the Lagna Kundli narrates about our body and personality, similarly the Arudha Kundli reveals about our image in the society. It is also studied in the same way as the Lagna Kundli, along with the impact of planetary positions and their outcomes. 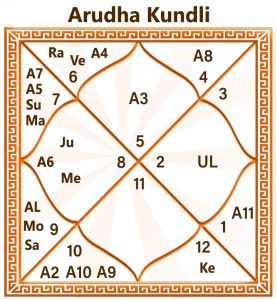 END_OF_DOCUMENT_TOKEN_TO_BE_REPLACED

For example, the kundli above is of Leo ascendant. The lord of Leo ascendant is the Sun, which is posited in the Libra zodiac sign in the third house from the ascendant. Therefore, while calculating the Arudha Lagna, the astrologer has to calculate the house from the position of the Sun till the third house. That is, while calculating from LIbra, we count Libra, Scorpio, and Sagittarius i.e. Sagittarius will be the Arudha Lagna, which is mentioned as “AL” in the above kundli.

Hence calculating the Dwitiya or Second (Arudha Lagna for the second house) Pada for the second house will include the sign in which Mercury is posited till the third house, which falls in the sixth house in Capricorn. Hence, the second pada is denoted as A2 in the sixth house. Similarly, calculations are done for all the houses and their Arudha is known. The twelfth house is also very important, which is also called Up-Pada (sub-pada) and mentioned in the above kundli as UL. 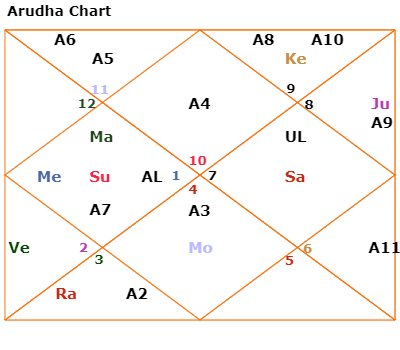 For example, in the above kundli, the Lord of the Ascendant is Saturn, who sits in the tenth house from the Ascendant. Now calculating from here, Arudha Lagna or Arudh Lagna will show in the seventh house, which is considered as an exception.

Therefore, we will consider the tenth house from the seventh house as the Arudha Lagna. This is the reason why the Arudha Lagna is considered in the fourth house (tenth from the seventh house), which is marked as AL. Another example is also present in this horoscope. Just like Aries is in the fourth house, one has to consider the position of Mars in order to calculate its Pada. Since Mars is located in this zodiac sign, then it should be the fourth pada, but as an exception, we will take the tenth house as the fourth pada or Chaturtha Pada. For this reason, A4 is denoted in Capricorn (tenth from fourth house).

Darker, shadowy planets are recognized in astrology, also known as Upgraha or Sub-Planets. All Upgrahas are mentioned in the 25th chapter of Phaldeepika, composed by Manteshwar ji. Many astrologers observe these sub-planets carefully using their skills and abilities and predict accordingly. Keeping this in mind, we have now added the new Upgraha Kundli feature in our AstroSage Cloud, which can be used by you. 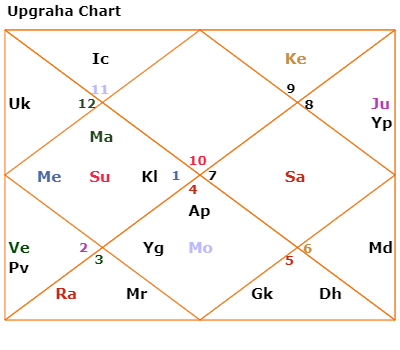 The main planets are considered to be the rulers of these Upgrahas, and it is believed that they quietly deliver their fruits. These Upgrahas are generally considered to provide inauspicious results, but it is not always the case. In some circumstances, they also provide favourable results. Therefore, in astrology, the position of Upgrahas must be taken into consideration when predicting the future.

In addition to the above two kundlis, we have also formed a new kundli named Bhinnashtakvarga. Maharishi Parashara, the pioneer of Vedic astrology, preached the knowledge regarding the elements of Ashtakvarga Paddhati to his disciple Maitreya. Between verses 19 to 74 of Chapter 1 of the north section of the Brihat Parashara Hora, the good and bad points of all planets in different houses are described.

In fact, these points are adopted in the Ashtak Varga Paddhati itself, where a planet offers favourable (Rekha) as well as unfavourable (Bindu) points, and based on that, its power and force can be decided. In this manner, every planet exhibits good and bad elements, which reveals the Prastar of every planet, through which the Prastar Ashtakavarga kundli is formed.

Each planet provides both favourable and unfavourable points for every house of a kundli. Based on this, calculations are made for every house. If any planet scores between the number 0-3, then the results are considered to be inauspicious. 4 is considered to be neutral, whereas 5 or more are considered to be favourable. In this way, a specific kundli is created for every planet, like Sun’s Prastar, Moon’s Prastar, Mars’s Prastar and so on. Combining them all forms the Sarvashtakavarga, based on which total points are analysed in a house and the results are evaluated accordingly. When the dasha of a respective planet is evaluated or planetary transit takes place, then the results are obtained based on the good and bad points (Bindu and Rekha). In such a manner, predictions can be easily done with the help of Prastar Ashtakavarga Kundli.

Prastar Ashtakavarga Kundli offered by AstroSage proposes the Prastar for each planet. Also, it reveals the kind of indicator a planet is for any house in a kundli, whether the results for a house are auspicious, inauspicious or mixed. Along with that, the main factors of that planet are also mentioned. With its help, scholarly astrologers can analyze the horoscope of any person and predict accurately.

For example, you can evaluate the below kundli: 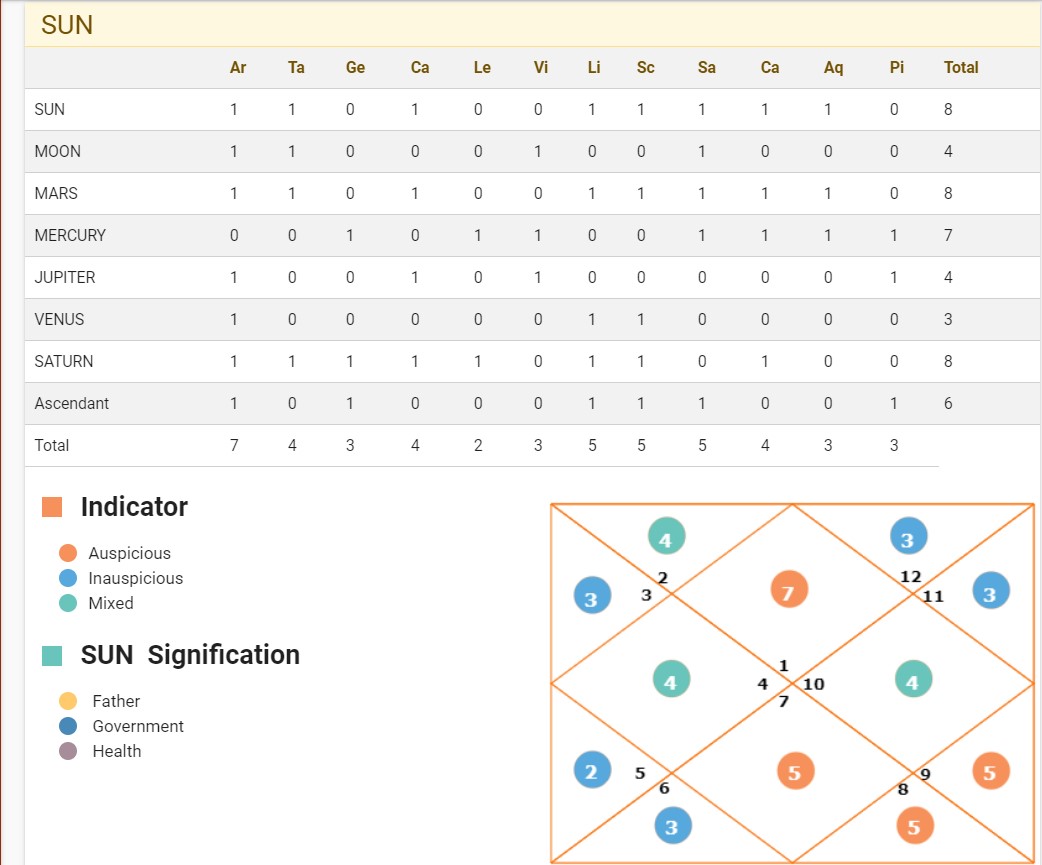 In the above image, you can see that the planet Sun has provided favourable number 7 for Aries, 4 for Taurus and 3 for Gemini. Similarly, you can see all the scored points. You can also figure out for which whom the Sun will churn out favourable, unfavourable or mixed results. Apart from this, the main functionary factor of Sun, i.e. father, government and health are also mentioned in it. In this way, one can roll out predictions based on the Prastar Ashtakavarga Kundli in less time.

We hope that the inclusion of these two Kundlis in AstroSage Cloud will prove to be very beneficial for you.