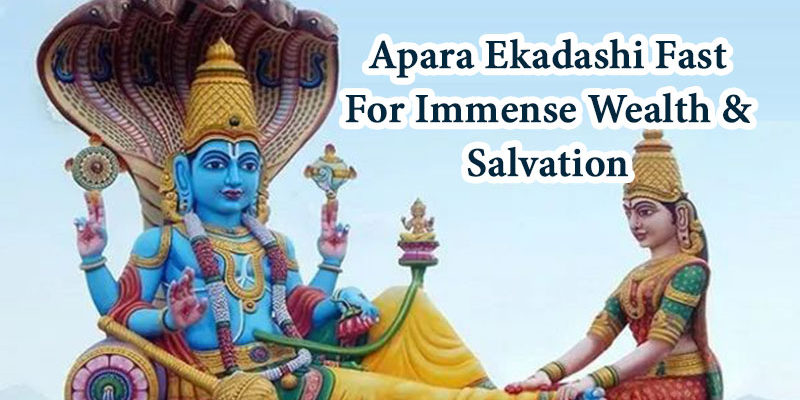 The Ekadashi which falls on the Krishna Paksha in the Hindu month of Jyestha is called Apara Ekadashi. The festival of Apara Ekadashi will be celebrated on Sunday, June 06, 2021. Apara Ekadashi is also known as Ajala. Lord Trivikram is duly worshiped on this Ekadashi. Also, Lord Vishnu should be venerated with full devotion on this day with Tulsi or basil leaves, Chandan or sandalwood, Kapoor or camphor, and Gangajal.

Connect With World’s Best Astrologers On Call & Know Everything As Far As Career, Finance, and Love, Etc. Are Concerned.

It is believed that one attains fame, virtue and immense wealth by fasting on this day and witnesses a rapid growth as well. At the same time, one gains freedom from sins such as Brahma Hatya, Parninda and Pret Yoni. Apara means immense, which is why according to the Puranas, fasting on this day brings immense wealth and prosperity. With the ongoing pandemic due to Corona Outbreak, all of us are worried about our financial, physical and mental health. In order to get rid of ongoing troubles and financial crisis in the present, one is advised to observe this fast. Let’s move ahead and know more about this day.

This year, the festival of Apara Ekadashi will be celebrated on Sunday, 06 June. People observing Apara Ekadashi Fast will perform Parana on Monday, June 07. The auspicious timings or Muhurat to perform Parana is from 05:22 AM to 08:09 AM. The total duration between which you can open your fast is about 2 hours 46 minutes.

Apara Ekadashi holds great importance in the Puranas. According to religious beliefs, the fruit obtained after observing the Apara Ekadashi fast is equivalent to that attained after performing the rite of Pindaan near the banks of Ganges, traveling the Kedarnath or Badrinath in Uttarakhand, or even performing the ritual of Swarna Daan or donating gold on the day of Solar Eclipse. This fast helps to gain immense wealth and fame in society. Whoever fasts on this day gets blessed with worldwide popularity and fame.

It is believed that by fasting on the day of Apara Ekadashi, one gets rid of sins and drowns in the Bhavsagar or cosmic oceans. Let us reveal you the method of worship and rituals for this fast:

Follow all the steps mentioned above and involve Lord Vishnu with sincerity and devotion.

The legend of Apara Ekadashi is such that in ancient times, there was a very kind and righteous king named Mahidhwaj. The king possessed great affection for all, but his younger brother Vajradhwaj had malicious thoughts against his brother and never liked his righteous attitude. One day, finding the right opportunity, Vajradhwaj killed his elder brother i.e. the King Mahidhwaj and buried his body under a Peepal tree in the forest.

Due to his premature death, the soul of the King Mahidhwaj became a ghost and started wandering under that very Peepal tree. Any living being passing by the tree or through that path would be bothered by the ghost of the King. One day, a sage was going through the same path. There, he pointed out the ghost of the King, and with his powers, asked the reason as to why or how he became a ghost. When the sage came to know about the past life of that soul, he freed the spirit of the King from that tree and preached him about Afterlife.

Along with this, the sage also observed the fast of Apara Ekadashi for the King to attain liberation from the Pret Yoni, and on the day of Dwadashi, he offered the virtue so obtained after observing the fast to the soul of the King. With the influence of Apara Ekadashi fast, the soul of the king attained salvation from the Pret Yoni, and he went to heaven.