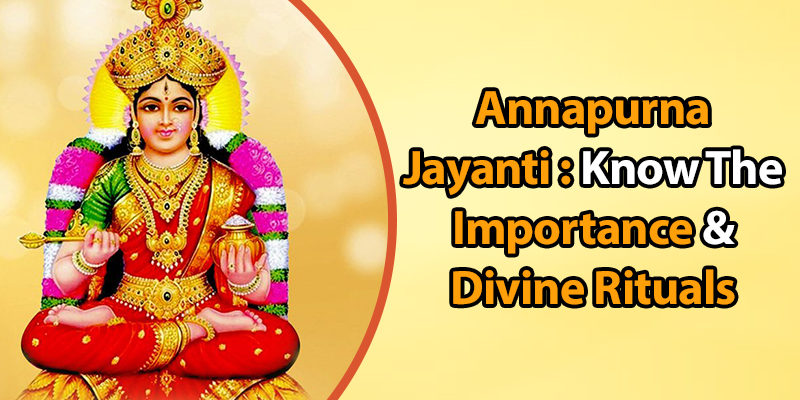 This Jayanti holds immeasurable significance among all the other Jayanti(s). It is believed about this day that one who observes the fast of Maa Annapurna with absolute sincerity and true devotion and worships with due rituals, faces no shortage of eatables in his/her house and it remains full of luxury and pleasures.

When will Annapurna Jayanti be Celebrated this Year?

Why did Lord Shiva take food from Maa Annapurna?

There was a condition of drought on earth. It got barren completely. The production of crops, fruits etc. got destroyed. In this situation, the species faced a crisis and then Lord Shiva took the form of a beggar and Maa Parvati incarnated herself as Maa Annapurna.

After this, Lord Shiva asked for food in begging from Maa Annapurna. With this food, Lord Shiva came on earth and distributed it among the people. After this, once again the condition of drought came back to normalcy and everybody started getting food. It is said that the tradition of Annapurna Jayanti has been followed on Purnima Tithi during Margashirsha month.

Things to be Done on the Day of Annapurna Jayanti

As per mythology, once there was absolute dearth of water and food on the earth. There was a condition of drought. In this pretext, everybody was about to die. After this, people started venerating Brahma Ji and Lord Vishnu.

Lord Vishnu requested Brahma Ji and Vishnu Ji after visiting Brahma Lok and Vaikuntha Lok to find a solution to this problem. After this, Lord Brahma and Lord Vishnu went to Kailash Parvat with all Rishis. After reaching there, all the deities along with Rishis prayed to Lord Shiva and said that people on earth had been facing an acute problem and therefore, he was requested to break his meditation and come into the awakened state.

All the people started chanting the name of Maa Annapurna. It is believed that Annapurna Jayanti started since then.