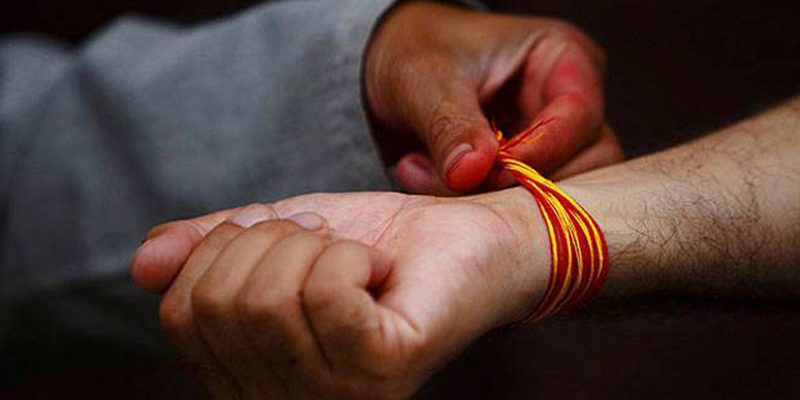 Every thread has its own significance. They are basically tied on different parts of the body to protect from evil eyes or gain health, wealth and prosperity. If you believe in these sacred threads,  it may provide you good results. Among all this, the method for wearing threads also differ and have its own significance. It is quite interesting that not all the threads can be worn by everyone. People must consult an “astrologer or pundit” before wearing it. Now, let’s understand the importance and significance of various coloured hindi dhaga or threads :

Yellow colour is very important in our life. It is a symbol of Lord Vishnu. It indicates creativity and logical ability in one’s life. If a person wears yellow thread, then it will enhance concentration, communication and confidence in a person. It is also the symbol of marriage. Bride wears the yellow thread for longevity of his husband.

White colour is a symbol of planet “Venus” and commonly used at the time of Upanayanam ceremony (or Yagyopaveet). The white thread is also known as “Janeu” in Hinduism. It is also the symbol of purity. According to Vedic Astrology, it is worn by the upper caste like Brahmins. This ceremony is celebrated only for the male members of the Brahmins family, which indicates transformation of young boy to a man.

Saffron or Orange is the color of fire, planets, Sun and other universal elements. Saffron is considered to be the most sacred color for Hindus. This color symbolizes the quest for light. Bhagwa/ Saffron color is mostly worn by sanyasis who left their home in search of truth and salvation. This color also helps in spreading spirituality with the help of planet Jupiter. People wear this color in the form of thread also. It is a long thread wrapped around the wrist forming a bundle several times. It is also used for different purposes. It is believed that it will provide name, fame, power, prosperity and protect the person from evil eyes.

Black color is governed by the planet Saturn. It is the powerful thread to protect any person from evil’s eyes and worn by small children on the waist, ankle or wrist in Hinduism. Adults tie it around their left wrists or armlet. Some people wear it as a necklace. It prevents the children from unwanted tantra/mantra and evil’s eyes. This color also signifies black magic and occult in astrology.

It is the most commonly used color in Hindus and represents the planet Mars. We may find men and women wearing this thread after a small puja on their right and left wrists respectively. It is a cotton thread which you can find in any temple easily. This cloth is offered first to the deity. In some parts of India, Kalava symbolizes “Raksha” which means “protection”

We hope you like our post, stay tuned with us for more updates on various interesting topics!