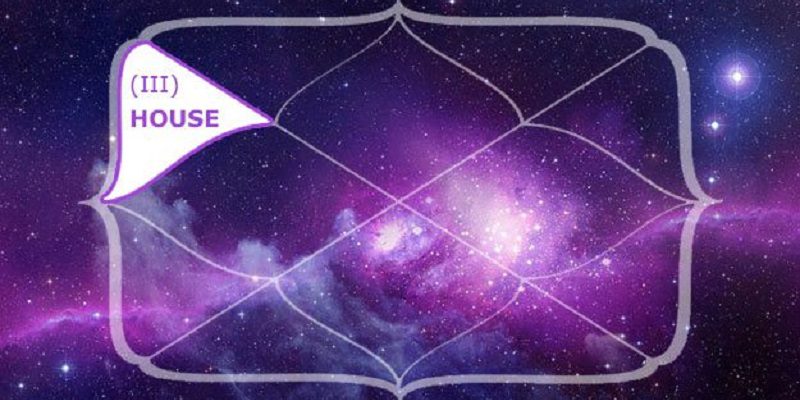 Third House in Astrology is commonly known as “The House of Valor or Courage” and “Bhrathrusthana”. It deals with our communication skills and efforts to attain the meaning or purpose of something. Our determination to do any kind of task on daily basis is seen through the Third House of the horoscope. It represents our younger siblings as well. The Third House has been described in various ways:-

According to “Satyacharya”, the mental stability of the person, determination and speech are also seen through the Third House of the horoscope.

As per “Sarvarth Chintamani”, it represents medicines, friends, education and short journeys in an individual’s horoscope.

Rishi Parashara denotes this house as the house of valor and efforts. This house represents our mental inclination and ability, instability of mind, memory and inherent propensities of our mind. This house basically represents our inclination towards study or efforts made to gain knowledge. The sign which is governed by Third House in Kaal Purush Kundali is “Gemini”. The natural ruler of this sign is “Mercury”.

Third house represents younger brother and sister, cousins, kindred, casual acquaintance and neighbors. Being the Sahayasthana, it investigates whether one is getting the support of others or individually working hard to accomplish his/her goal.

One of the twelve astrology houses, this house represents books and their publications. Hence, an individual can become an editor, newspaper reporter, information officer, journalist etc. in near future. It also signifies the change of residence, restlessness, transition and change, library, bookstore, bargain, signature (signing contracts or agreements), intermediator. It also represents hands, collar bone, arms, respiratory and nervous system.

According to Nadi Paddhati, this house indicates the remarriage of native’s parent(s), if more than one planet occupies space in Third House.

In Horary Astrology, Third House represents all forms of communication, whether by letter, postal delivery, telephone, fax or Internet.

Interrelation with Other Houses

Third house in Astrology represents communication, speech, movement of hands, athletic ability long distance travel (only for “self” benefit). If you are using your hands to accomplish your tasks, it will be governed through the Third House of the horoscope. It represents driving, art, media, entertainment, road, performing any art, house of dictation, which means you’ll preach your close relatives or siblings in order to convey the message. Showing the way or road to perform any task or travel is seen through the Third House of the horoscope.

Third house represents transformation and death of your in laws in general. It is the 8th  from 8th house hence, shows death like experiences. It represents spouse of your gurus, spouse of your father (that means your mother). It represents debt, illness, sickness of your bosses, children of your elder siblings, storage of spiritual karma. What can lead you to moksha, what makes you travel to foreign land, what makes you visit/admit in a hospital etc. are represented by the Third House.

Third House as per Lal Kitab

According to its text, Mars is the natural dispositor of Third House but Mercury also rules over it. An individual will possess the same characteristic as driven by these both planets together. This house will be activated by the Lords of ninth and eleventh house. If these two houses are vacant, then Third House will remain inactive or neutral. It will not provide any kind of result.

Hence Third House becomes prominent as it drives our messages to the world, inner circle of friends, through social media, entertainment, online sources, internet, cell phones, smartphones or any kind of communication devices, hence acting as a mediator.