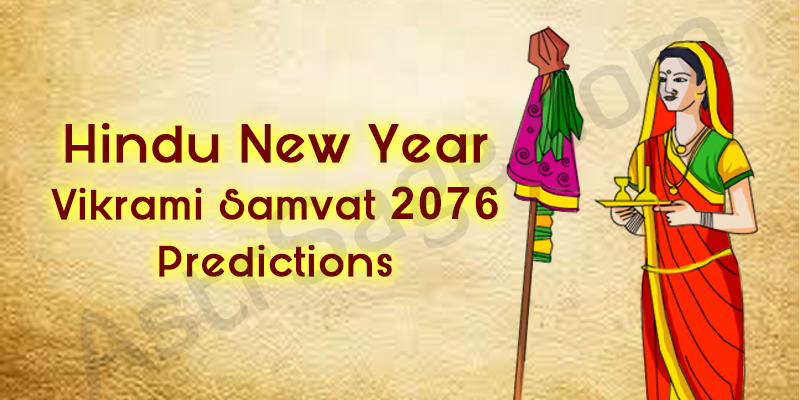 When evaluating the New Year, Chaitra Shukla Pratipada and New Year, i.e. Mesha Sankranti’s kundli is analysed, based on which the predictions are given.

The kundli of Mesh Sankranti is of Cancer ascendant and lagna lord Moon is placed in its own house. Jupiter, Ketu and Saturn is placed in the sixth house and Venus in the eighth house. Mercury is in the ninth house, Sun in the tenth house, Mars in the eleventh house and Rahu in the twelfth house.

Let us know on the basis of these two horoscopes, what changes will this New Year bring to our country and countrymen:

Current State of The Nation

According to Hemadri Brahma Puranas, Lord Brahma created this world on the first day’s sunrise during Shukla Paksha in the month of Chaitra. Hence every year in the month of Chaitra during Shukla Paksha, the Pratipada or first date or tithi is celebrated as a New Year in Hinduism. In the year 2019, the new samvatsar begins from 6th April, Saturday and called as Paridhavi. This is the 46th Samvatsar in the sequence. Vikrami Samvat 2076 begins from the Chaitra Pratipada (first day of Chaitra month). Also, Chaitra Navratri is also observed on this day.

It means that during the Paridhavi Samvatsar, relationship between the countries of the world will become tense and war-like situations can occur. There might be less rainfall during the month of Shravan and Bhadrapada, leading to monetary imbalance. Prices of crops and fruits will rise. During this period, there will be a fear of violence and brutality and the environment will remain disturbed. Four-legged creatures can suffer and there will be a hike in the prices of fruits and juicy materials. Along with it, you’ll see a decline in the prices of silver and other metals.

As per the Jyotir Nibandh, on the Chaitra Shukla Pratipada, the day at the time of sunrise is considered as the “King” of the year. As this time the Pratipada is falling on Saturday, hence Saturn will be considered the King of the year.

Officers Of This Year

Due to Revati Nakshatr falling in the beginning of the year, there will be plenty of rainfall, due to which harvest, people and economy will prosper.

Get Here: All Auspicious Dates & Muhurat for this Year

Effects of Officers of the Year

King of the Year Saturn

With Saturn being the King this year, an increase in the violent and disturbing circumstances and war-like situation can occur. There might be low rainfall and drought like situation. There is also a possibility of mass loss. Inflation may be seen in the country, leading to high prices and costliness. Due to infections and diseases, public may suffer and a situation of confrontation between ministers of the country can occur. People can escape from one place to another due to terrorist activities and violence.

Minister of the Year Sun (Mantri)

The Sun is the minister this year, which is why public may develop fear towards scandalous people and strict judgement and rules passed by the government. Although, country will maintain excellent financial terms. There will be favorable agricultural conditions in the northeast. There can be tensions rising between the State and Central Govt. along with a decrease in the production of juicy materials leading to an increase in their prices.

Lord of the Harvest Mars (Sasyesh)

With Mars being the Shasyesh, fauna may have to face troubles and the animals may suffer from various diseases. Infections will increase. In the southern states, crisis regarding drinking water can occur. Communal instability and violence will increase and crops may get damaged due to low rainfall. As a result, their prices will also increase.

With Saturn being the commander-in-chief, hostility and enmity with neighboring countries can increase and war-like situations can occur. Due to internal conflicts in the countries, instability can occur. Apart from this, any kind of natural calamity will be likely to affect the public majorly. Communal tension will increase and conflict between communities can increase. Also, crops are likely to get damaged.

Lord of the Clouds Saturn (Meghesh)

Meghesh denotes the yearly rainfall. With Saturn being this year’s Meghesh, irregular rainfall is likely to happen. Due to this, some places can suffer from flood-like situations whereas some may face drought. As a result, natural disasters can take place in western countries and communal peace can get disturbed. There will also be possibility of damage to crops.

Lord of the Money Mars (Dhanesh)

Dhanesh means the lord of finances and money. With Mars being the Dhanesh this year, fluctuations in the business sector along with the prices of several products can be seen. Due to unwanted or untimely rainfall, adverse effects can be seen on the cultivation and harvest. In addition, the situation of the country will be likely to move towards uncertainty and instability can prevail. Some strict decisions will be taken by the administration. Fluctuations in the economy for several countries can be seen.

Get This Year’s Hindu Calendar

Lord of the Juices Jupiter (Rashesh)

This year, the Rashesh is Jupiter and as a result, the public will acquire positive results. Plants with fruits and flowers will bloom and respect of wise and intelligent people in the society will increase. The flora, fauna, medicinal plants and water resources will develop, hereby making nature more beautiful. Police or army vehicles can be deployed at some place in particular.

Lord of the Fruits Saturn (Phalesh)

Phalesh means the lord of fruits. Due to Saturn being the Phalesh this year, there will be a possibility of a decline in the cultivation of flower bearing plants and fruits. Also, less flowers can bloom. The situation of untimely snowfall is likely. Apart from this, uncivilized elements of the society will become active and there can be an increase in chronic diseases being born.

Lord of the Harvest Moon (Dhanyesh)

Due to the Harvest lord (dhanyesh) being Moon, there will be plenty of rainfall, leading to excitement and progress among people of the country. There is a possibility of increase in population and winter crops. The number of animals giving milk will increase, so there will be a rise in the milk and milk products. Rainfall can occur by observing spiritual rituals and doing good deeds. A sense of communal peace and harmony will prevail. The water level of rivers and water resources will remain balanced.

Lord of the Water Mars (Nirshesh)

In this way, we can see the following upcoming signs of events:

Housewarming Rituals To Follow Before Entering Your New Home

We hope that the Hindu New Year Chaitra Pratipada 2019 be auspicious for you. We also wish for your better future.