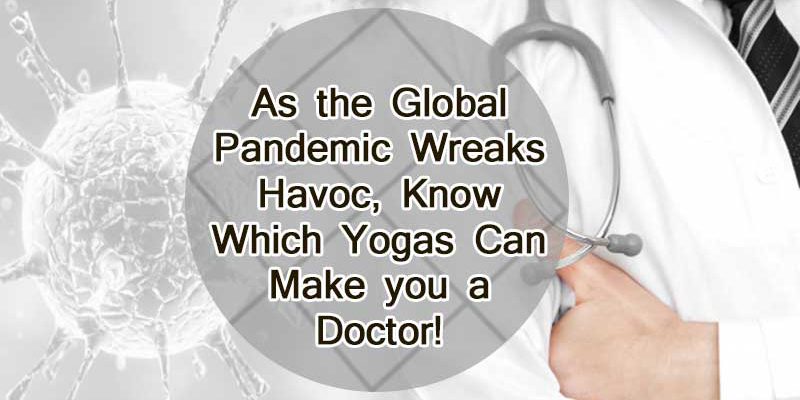 The current time frame witnesses this deadly Pandemic taking down several countries one by one. The only ones who are fighting, no lesser than Gods and ensuring that the human race doesn’t get wiped off from the face of this planet are doctors.

They are the true warriors of this time who will be remembered in the pages of history. Their resilient fight against Corona bears witness to the greatness and nobility of this profession. Amongst the lot who are praising doctors for their contribution, there are also some people who want their children to pursue this profession and serve mankind. If you want to know whether your child can make a career in the medical field or not, you can take help of the CogniAstro Career Counseling Report.

Keeping this curiosity in mind, we will let you know which planets and their conjunction in your Kundli can inspire you to choose this particular profession. This basically means that we will tell you which planets in your particular birth chart needs to be aligned in a particular state so as to make you a successful professional in the medical field.

Which Houses in Kundli Can Make you a Successful Medical Professional?

The fourth and fifth houses of our Kundli are considered to be the significator of our intellect and education.  Both of these can be taken into account and studied thoroughly to find out if a person has some interest in the medical field.  His or her knowledge with regards to the same can also be navigated with the help of these houses(bhavas).

Apart from these houses, the sixth, eighth and twelfth houses are also considered to be very crucial for this navigation. The sixth house denotes diseases and ailments, which is why it has close associations with wellness and diagnosis. Lastly, the eighth house is also considered to be the one which denotes life expectancy. Additionally it also serves as a very important house for the ones who work in a hospital and the field of diagnosis.

Also, those who are pursuing their higher education in the medical field can seek the help of CogniAstro Career Counseling Report for professionals which definitely ensures success in this field. Now let us know what are the chances of becoming a doctor as  suggested by astrology

The first house as it is known as Lagna or ascendant, stands for the self the second house is hailed as the house of profits, wealth and also our speech. The eleventh house is studied to know about one’s income and professional success. Along with all these houses, the tenth house being the governor of profession and business and because of this, all these houses can be collectively taken into account to study how well are the prospects conjoined for an individual  to become a doctor.

Yogas in the Kundli Which Can Make you a Doctor!

In today’s generation, a doctor’s contribution and skills are quite important for a civil society to function adequately. A doctor not only helps the patient to fight diseases but also provides him or her with a new life. Now in this difficult time when Corona virus is spreading like wildfire, the importance of doctors and other medical professionals have increased rapidly.

Needless to say, the respect for them in people’s eyes have also increased. Considering the fact that they are in the front line and are working day and night to flatten the curve and cure people. In such a situation, if you wish for yourself to become a doctor or even want your child to become one, then you can know the correct combination of planets which needs to be present in your Kundli so that you can become a successful doctor. Let us  now find out which combinations they are.

Primary Planets Responsible for Making you a Successful Doctor

Each and every profession is governed by certain planets and they make special contributions for natives to become successful in such fields. In such a situation, some planets also play an important role for an individual to become a doctor.

Let us now find out which planets they are.

As it is known to all, the Sun is the king of all the Navagrahas(nine planets) and one of the primary planets which leaves a spectacular impact on a person’s health. Considering the fact that it signifies the same, it generates willpower and confidence in a particular person. If the position of Surya or the sun is strong in one’s Kundli and it is located in one of the centre houses along with Moon, Jupiter and Mars,  then it is certain for the particular native to ace in the medical field.

Chandrama or the Moon is the significator of all kinds of medicines and it is quite crucial for all doctors and medical professionals to have thorough knowledge about the medicinal compounds and drugs. This is the reason why the Moon is also quite important in governing this particular field. If the moon is under the influence of malefic planets in your Kundli and residing in the sixth, eighth and twelfth houses or else it is taking rest in the tenth house while being the ruler of the above-mentioned houses, then it definitely denotes success and prosperity in the medical field.

Jupiter is the primary governor of knowledge and it is quite important for a doctor to keep acquiring knowledge every single day so as to keep himself/herself updated. This is where the contribution of Jupiter comes in. If Jupiter in one’s Kundli remains in an afflicted state then one can face difficulties in becoming a medical profession. The other alternative would be to look for a career in the field of Ayurveda and Homeopathy.

Mars is the primary significator of courage and might and it also governs machineries and tools/equipment. A doctor needs the possession of many equipments and also needs to perform operations which is why the position of Mars is very important. The relationship of Mars with the sixth or tenth house especially helps natives to become surgeons.

Saturn generates seriousness in a person’s behaviour and spectacularly provides one with technical knowledge and expertise. This is the reason why  Saturn is hailed as an important planet. If it is influencing the tenth house and also the ruling Lord of the tenth house and it comes out as the governor of sixth, eigth or twelfth house and gets conjuncted with a malefic planet, then it can  provide you with success and prosperity in the medical field.

Rahu happens to be a miraculous planet and the knowledge which is necessary to acquire medical expertise is very much dominated by this planet. If the planet Rahu remains seated in the sixth house and maintains relations with the tenth house or its ruling Lord and is also closely connected with certain malefic planets, then also it plays an important role in building a human being as a doctor.

Get the Most Detailed Kundli Ever with the Brihat Horoscope!!

The conjunction of planets is given supreme importance in the realm of Vedic astrology. It is so because the presence of more than one planet is capable of generating multifolded results. There are various departments and branches associated with the human body which is why doctors specialise in various organs. To make things more easy for you we will lift the veil on this and let you know which particular conjunction rules over the different branches of Medical Science. The conjunction of the planets are noted down below.

Some other Special Yogas

Apart from the ones mentioned above, there are some other special Yogas present in the Kundli which helps one to make great progress in the field of medical practice. Let us take a look at them.

So, in this manner a native can try his/her hands at the medical field after studying some special positions of planets in his/her Kundli. If you wish to become a doctor and some of the Yogas mentioned above are present in your Kundli, or else the planets are undergoing their major period(Maha Dasha) and sub period (Antar Dasha), then you should definitely perform certain remedies for their pacification, so that you can become a successful doctor. Let the sense of service and benevolence prevail inside you, so that you can always thrive to dedicate yourself for the betterment of mankind once you become a doctor.

We hope that you will appreciate this blog of ours. Stay safe and thank you for connecting with us!!!