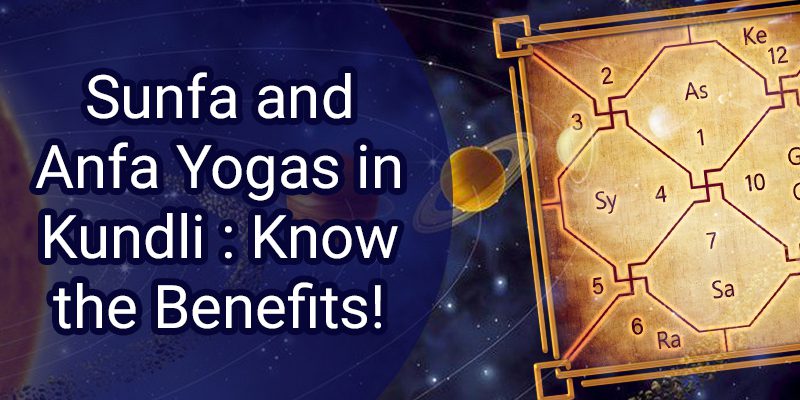 The Indian branches of astrology talks about the existence of many Yogas which are not only responsible for your materialistic pursuits but also makes one eligible for a happy and prosperous life, after manifesting the ‘Karmas’ of the previous birth. However, there is the presence of both auspicious and inauspicious Yogas and as per the planets present in the birth chart, they produce the respective results. Two of such Yogas are the Sunfa and the Anfa Yoga.

Both of these Yogas are formed in the Kundli due to the Moon. If the presence of Moon’s position is weak in the Kundli, then a Raj Yoga cannot even produce auspicious results despite it being such a tremendous Yoga. If you also wish to know the presence of Raj Yoga in your Kundli and details associated with it, then you can collect our specialised Raj Yog Report and get answers to the same.

The strong presence of the Moon in the Kundli is of great significance and it is very much responsible for the inflow of auspicious results. The Sunfa and the Anfa Yogas are considered to be auspicious, but it is necessary for the Moon to remain in a strong state to acquire positive results from one of these Yogas. If the person is born between Ekadashi Tithi of Shukla Paksha, Panchami Tithi of Krishna Paksha, and parts of the Moon are between 10 to 20 and are also not visible from malefic planets and also when the Moon itself is not present in inauspicious places. If all of these are not the case scenarios and the Moon’ state is Bali, then auspicious results come into being.

According to the definition prevalent about Sunfa Yoga in astrology, if a planet is posited in the next house from the Moon in a particular Kundli, then Sunfa Yoga is formed there, which can provide wealth, prosperity and fame to the native. If the Sun is located in the next house only to the Moon in a particular Kundli, there is no Sunfa Yoga present in the Kundli and in such a situation, any other planet should be present along with the Sun.

For example if the Moon is present in the ninth house of a Kundli and any other planet apart from the Sun is present in the tenth house, then there is a possibility of the Sunfa Yoga getting created in the Kundli. According to its prevalent definition, Sunfa Yoga is found in quite a few Kundlis, but it doesn’t necessarily offer positive and auspicious results to all. Hence, for this particular yoga to get formed in the Kundli, it is also necessary to reflect upon certain other factors.

Before determining the auspicious results of Sunfa Yoga, the strong presence and position of the Moon in the Kundli should also be taken into account. For instance, Sunfa Yoga gets formed when the Moon remains in the fourth house in the Cancer sign in a Kundli, which will be much more powerful and auspicious than the Sunfa yoga created by being in the eighth house in the Scorpio sign in the Kundli.

Results of Sunfa and Anfa Yoga

If the birth chart of a person hosts the presence of Sunfa and Anfa Yoga, then the person turns out to be famous, majestic, prosperous, kind, rich and is the head of any section professionally etc., gets blessed with good health, honor and fame. Such an individual’s interest in spirituality also increases, these Yogas provide the prerequisites for the natives to lead a peaceful life and also a person gets the auspicious results of these two Yogas when the Dasha(major period) and AntarDasha( sub period)of two planets come into effect.

Apart from the Sun, if there is any planet in the next house from the Moon, then it is called Sunfa Yoga. A person with this Yoga in the Kundli will be famous and rich for his/her educational abilities, and will get all sorts of comforts of life.

If Mars is present in the second position from the Moon in one’s Kundli, then Mars/Mangal Sunfa Yoga gets formed. This Yoga is responsible for making a person mighty, rich, tough, rude in his/her speech, lord of the land and one who takes interest in violence.

If the Sunfa Yoga gets formed from Mercury, then a person becomes proficient in Veda Shastras and music.He/she also takes special interest in poetry and becomes popular because of his/her good habits. People with this Yoga in their Kundli are often attractive to look at.

If Sunfa Yoga gets created because of Jupiter, then the person often possess false knowledge about various topics. He or she becomes popular because of his or her eligibility. Such a person always tries to abide by religious beliefs and get the gift of a family as well as abundant wealth.

If the Sunfa Yoga gets created in the Kundli because of Venus, then such a person is usually into the profession of farming, remains associated with the soil and possesses a vehicle. He/she is quite mighty and holds the amount of political relevance. Apart from this, traits of cleverness are also found in such a person.

If Sunfa Yoga gets created from Shani or Saturn, then the person turns out to be fair, more hardworking, virtuous and lucky at the same time.

Do you wish for a prosperous and successful life? Raj Yog Report Tells it All!

In the realm of astrology, there is a prevalent definition of the Anfa Yoga which states that if any planet takes residence in the previous house from where the Moon is situated, then this particular Yoga gets formed. It blesses a native with good health, prosperity, fame and spiritual advancement. Astrologers are of the belief that the Sun’s position need not be taken into account for the calculations of this Yoga.

For example, if the Moon is situated in the fourth house of a Kundli and there are other planets in the third house, apart from the Sun, then Anfa Yoga definitely gets formed in the Kundli. According to its prevailing definition, Anfa Yoga is a part of many Kundlis, but many of these people do not get the auspicious results of this yoga, due to which some other aspects also need to be considered while making the necessary calculations with regards to this Yoga.

A native whose Kundli hosts the presence of Anfa Yoga tends to be beautiful, strong, talented, soft-spoken and famous, often has a well built body and also carries the ability to become a politician.

When Mars  is present in the twelfth house from the Moon, then the Mamgal/Mars Anfa Yoga gets created. A person becomes a born leader when this Yoga remains a part of the Kundli. He/she turns out to be quite majestic. But, emotions like anger are also found in excess in such a person.

If the Anfa Yoga gets created from Mercury, then a person who is beautiful turns out to be attractive, is clever and often becomes a singer, writer, poet, speaker and one who leads a majestic and royal life.

A person can be categorized as serious, brilliant, intelligent, state-respected and famous if the Anfa Yoga gets created because of Jupiter.

If Venus propagates the Anfa Yoga, then the person is popular amongst the opposite sex, he gets the due affection of the king, gets blessed with a vehicle and also has the chances of becoming a famous poet.

If the Anfa Yoga becomes the blessing of Saturn, then the person often tends to have long arms. He/she is lucky, virtuous and gets blessed with good progeny.

To Connect with our expert Astrologer Dr Sunil Barmola On Call: Click Here

Thank You so much for connecting with AstroSage!!