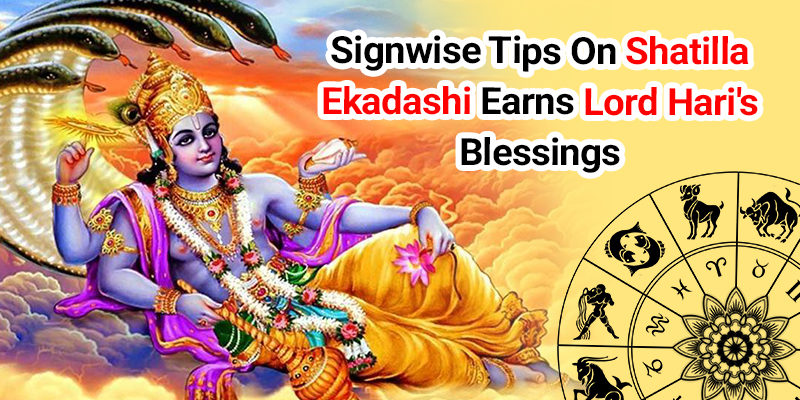 Every day of the Magha month is considered holy in the realm of Hinduism, and if the day is Ekadashi, it is considered gold. Because Magha is considered a very holy month, Ekadashi, which falls during this month, is given extra significance.

Along with this, other interesting and important information related to this day will be provided to you through this article.

Information: Given Muhurta is valid for New Delhi.

Click here to know the auspicious Shattila Ekadashi 2022 Muhurat according to your city.

How Did This Ekadashi Get Its Name As Shattila Ekadashi?

Shattila came from two hindi words, Shat meaning six and Tila meaning til (sesame seeds). Shattila means to use sesame in six ways. This is the reason why this Ekadashi is called Shattila. In fact, the winter’s begin to fade away in the month of Magha, while autumn is at its peak on one side. In such a condition, sesame’s usefulness grows exponentially throughout this season, since sesame helps to cut the winter. As a result, during this time, the importance of sesame in bathing, donation, tarpan, and diet has been emphasised.

250+ Pages Personalised AstroSage Brihat Horoscope For All Solutions Of Your Life Problems!

Sesame seeds have special significance on the day of Shattila Ekadashi. The Shattila Ekadashi fast will be celebrated on January 28th, as we mentioned earlier this year. Lord Vishnu is worshipped on this day since Ekadashi Tithi is dedicated to him. On this day, fasting or Ekadashi worshipers worship Lord Vishnu in the morning and evening, reading and listening to the vrat kathas associated with this Ekadashi tithi, performing aarti, and thus concluding their worship.

In many places, Shattila Ekadashi is also known as Pap Harani Ekadashi. The significance and meaning of this Ekadashi date is clear in such a situation, as it destroys all of a person’s sins. On the day of Shattila Ekadashi, the devotion of this day is incomplete without doing aarti. Do aarti on this day if you find yourself in this situation.

All of Hinduism’s fasts and festivals have their own set of rules and regulations. In such a situation, it is critical that if you are going to observe a fast, you first learn the rules of the fast and then adhere to them. It is claimed that if you follow the rules, you will become a fertile manifold.

Let’s take a look at the Shattila Ekadashi fasting rules:

By the grace of Lord Vishnu, all your wishes will be fulfilled and you will definitely get the auspicious result of Shattila fast.

Aries: By attending to the temple and donating sesame seeds, you can enhance your riches and food grains in life. Aarti of Lord Vishnu with a ghee lamp should also be performed on this day.

Taurus: On the day of Shattila Ekadashi, Taurus zodiac people might gift sesame seeds in an earthen pot to a Brahmin for happiness and wealth. During this time, you must accept his blessings.

Gemini: People born under the sign of Gemini should donate 11 sesame and jaggery ladoos to a temple on Shattila Ekadashi. All of your wishes will undoubtedly come true if you do so.

Cancer: On the day of Shattila Ekadashi, after having a bath, people born under the sign of Cancer should present water mixed with sesame seeds to the Tulsi plant and seek Tulsi’s blessings. You will achieve all-around success in your line of employment if you follow this treatment.

Leo: On the day of Shattila Ekadashi, worship Lord Vishnu properly with incense lamps and other offerings, as well as sesame and urad dal. The offspring of Leo zodiac people will have a lot of happiness in their married lives if they use this treatment.

Virgo: People born under the sign of Virgo should perform Havan with sesame seeds at home on Shattila Ekadashi. During this time, keep singing Lord Vishnu’s mantras and offering 108 times. Every problem and stumbling block in your life will be gone if you follow this method.

Libra: On the day of Shattila Ekadashi, people born under the sign of Libra should visit the Vishnu temple and donate yellow cloth. Your children’s attention will begin to focus on their academics as a result of using this cure, and they will undoubtedly succeed.

Scorpio: People born under the sign of Scorpio who desire to make a good living or get a good career should chant Lord Vishnu’s mantra ‘Om Madhavaya Namah’ 21 times on the day of Shattila Ekadashi. In addition, make a sugar and ghee mixture with crushed sesame and serve it to Lord Vishnu. Take this bhog as prasad after you’ve finished worshipping.

Sagittarius: The people of Sagittarius should throw some water mixed with sesame in front of Lord Vishnu on Shattila Ekadashi and worship him meticulously. After worship, you should distribute this water as prasad to all members of the household. Your entire family’s health will improve as a result of this.

Capricorn: In order to keep their relationship beautiful and strong with their life partner, the people of Capricorn can do a small remedy on the day of Shattila Ekadashi, that on this day, offer Panchamrit mixed with sesame seeds to Lord Vishnu and offer Ekakshi coconut to him.

Aquarius: On the day of Shattila Ekadashi, apply sesame paste on the body before bathing and after 20 minutes take a bath with sesame seeds mixed in your bath water. During this, meditate on Lord Vishnu. By doing this you will stay graceful.

Pisces: The people of Pisces who are preparing to sit in government job or government competition should take 11 tulsi dal on the day of Shattila Ekadashi and worship Lord Vishnu by applying turmeric vaccine on it and then this tulsi dal is worshipped by Lord Vishnu. By doing this remedy you will definitely get success.

(Here, take special care not to pluck Tulsi leaves on Ekadashi Tithi. If you want, you can keep Tulsi leaves plucked a day in advance.)

We hope that you must have liked this article of ours. Stay tuned with AstroSage for more such articles. Thank you!