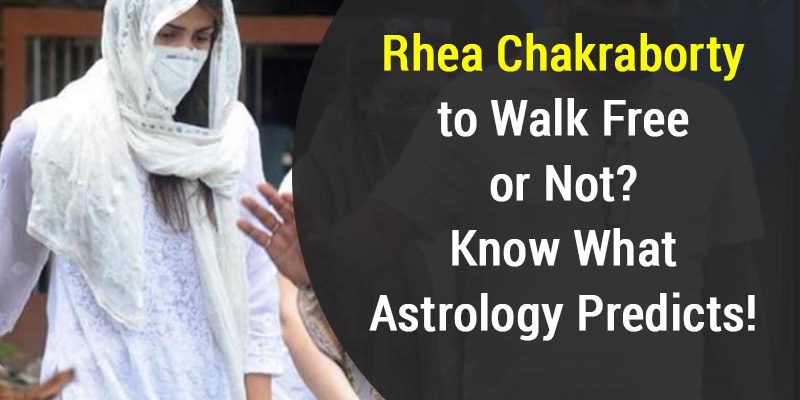 With each passing day, we get to see new twists and turns surrounding the Sushant Singh Rajput case. New angles, new suspects and new conjectures, all of these are day to day occurences. Despite all of this, no one has the correct information about the happenings which took place during the night and day of 13 and 14 June, 2020. All eyes are now fixed on Rhea Chakraborty, Sushant Singh Rajput’s former partner. She has now become one of the prime suspects in this case.

In such a situation, everyone is stuck with the same question, Is Rhea the real culprit? If yes, then will she end up behind the bars? Will she get convicted or be able to walk freely after pulling a few strings? The same has been evaluated by Acharya Raman. For the information of the readers, we would like to inform that Acharya Raman has already predicted the encounter of Vikas Dubey, which turned out to be accurate. The following sections are straight from Acharya Raman’s mouth.

I have no interest in harming anyone`s social reputation etc, to begin with, but with the media covering new angles in the case of Sushat Singh Rajput who gave his career best performance in the biopic of M.S.Dhoni, I am also trying to find out astrologically whether Rhea will be imprisoned if she is found guilty of abetting the suicide or for the perceived murder of Late Sushant Singh Rajput.

Predictions on the Basis of Numerology

The name in use is Rhea which totals to 4 which is again a very bad number considered in Chaldean numerology.

“29:- This number indicates uncertainties, treachery, and deception of others ; it foreshadows trials, tribulation, and unexpected dangers, unreliable friends, and grief and deception caused by members of the opposite sex. It gives grave warning if it comes out in anything concerning future events.”

Now, we are witnessing the same in the current scenario. Until and unless there is a final verdict given by the CBI and our justice system, we cannot say anything but number 29 is a very unfortunate number indeed, which I can say from my personal experience.

I was talking to someone and the person was also interested in knowing what is going to happen, whether she will be jailed in the time to come or will she come out clean like many others who have successfully dodged the accusations they have been bombarded with. There are stories of black magic, underworld, drugs, sex rackets all coming in from Bollywood veterans, his neighbours, and so many people which have only made us believe that Bollywood is a very unclean place altogether.

One should keep in mind that at this time Jupiter is in retrograde motion, Saturn is also in retrograde, which is why things will remain blurry till they get direct which will be in the conclusive phase of September 2020.

She gave me a number between 1 to 249 to know the answer of the question whether she will be imprisoned. Rhea’s horoscope is attached below and the number is 99.

12th house is taken into account to check many things and imprisonment happens to be one of them.

Ketu Dasha(major period) and Mercury Antar Dasha(sub period) are running in the horary chart. Ketu is in Ketu star and in the sub of Venus which is in the 11th bhava. The Antara lord Mercury is in the star of Venus and Jupiter Sub, Jupiter and Moon are aspecting Rahu which is connected with the 12th house.

Thus here we see that there is a very confusing connection between the houses and planets which is the case in reality too. This means that there is a lot of confusion related to whether she will be jailed or not. A new angle keeps coming into the picture regularly.

Rahu and ketu are going to change places on the 23rd September, Saturn and Jupiter will go direct on 23rd and 29th of September. Mars will retrograde around that time.

With all simplicity and no presumptions, my analysis of this chart are as follows: