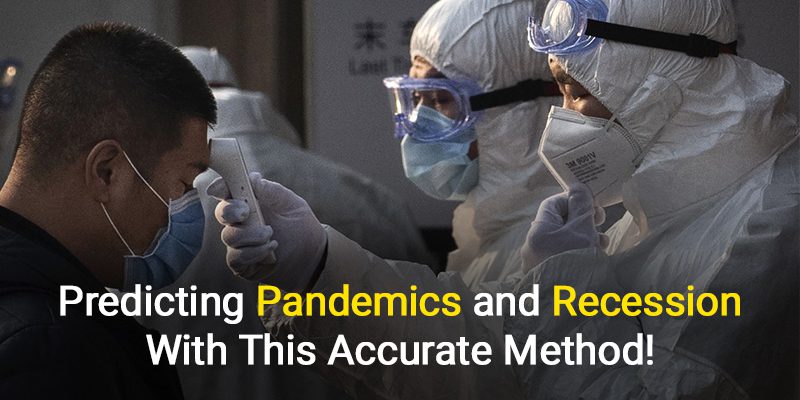 In recent times, the world has become more and more globalized and connected. Dollar has become a global currency. Small localized religions have been taken over by few religions with a global following. Capitalism is now the only political and economical system replacing varied systems of the past. A human being is truly a global citizen now. As the world becomes more and more globalized, we need different astrological tools to predict about the whole world.

In the last article, I mentioned how my research of Guru-Cycle can be used to predict global events like pandemics and recession with very high accuracy. But as the article was related to Coronavirus, I wanted to write another article specifically focused on explaining the technique. In this article, I will explain two major world-level events using this technique of Guru-Cycle chart, so that this amazing predictive technique can be understood easily.

Roughly every year, Jupiter and Sun conjoin once. My research suggests that the Moon chart at the time of this conjunction can be used to predict global events very accurately for the coming year.

I have already used it to demonstrate Coronavirus pandemics earlier and today I’ll use another two big global events and explain the application of the Guru-Cycle chart.

Most of us remember financial crises in 2008 which impacted the whole world. We are still trying to recover fully from the global crisis after the collapse of the investment bank Lehman Brothers on September 15, 2008. It is considered by many economists as the most serious financial crisis since the Great Depression of the 1930s. The primary reason for this crisis was the Housing Bubble. The inflated price of property and housing brought the whole world economy on its toes. Jupiter (Guru) and Sun (Surya) conjunction happened on December 23, 2007. Here is the Guru-Cycle chart – 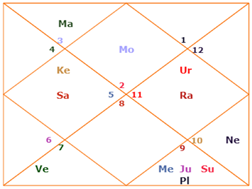 As we know this financial crisis was rooted in the inflated property & housing market in the US. I’ll try to use basic concepts of astrology so that even a layman can understand it. 4th house signifies property in astrology and 2nd house signifies finance. 4th house has two first grade malefics Saturn and Ketu. Saturn is very weak by being in the Sun’s sign. The 4th house lord itself is very weak by being in the 8th house. Such a weak 4th house gives very clear indication of problems related to property and housing. Why crises related to housing and not related to other significations of 4th house.

There is a principle in astrology which I call Saadrish Siddhant. I have written a full series of articles to teach astrology and more specifically about Saadrish Siddhant can be found here. Late Shri J. N. Bhasin has talked in detail about it but in a nutshell, every house has some fixed signification and so does the planet. If a planet owns or occupies a house, that common signification increases many-fold and will definitely be visible in the result. In this case, Saturn is Karaka of property and 4th house is also Karaka for property and Saturn occupies 4th house, so that we can expect results related to property and housing for sure.

Now 2nd house, the house of finances, has malefic 12th lord Mars in It. 12th house is the house of expenditure and loss, so no wonder finance of the coming year is going to hit severely. On top of that, the 2nd house lord is situated in Trik 8th house, which is further weakening the 2nd house.

Overall strength of Kundli is determined by Ascendant. As this is the Moon chart, we will be judging Moon. Moon though is exalted, but aspected by Saturn-Ketu combined. Moon Sign Lord Venus is situated in the 6th house and again aspected by Saturn, the chief significator of property. 6th house is also the house of debt and called Trik house in astrology. Any house owner in Trik house (6, 8 or 12) weakens the owned house. Venus is also the Moon Sign Lord and aspected by malefic Saturn with 3rd aspect. So, the whole kundli of 2007-2008 is destroyed especially by weak 4th house.

The Spanish flu, also known as the 1918 flu pandemic, was probably the biggest pandemic we have seen in the last 200 years. As per Wikipedia, it infected 500 million people – about a quarter of the world’s population at the time. The death toll is estimated to have been anywhere from 17 million (1.7 Crore) to 100 million (10 crore). Let us create a Guru-cycle chart and see how it gave clear indication of this pandemic. Jupiter-Sun conjunction happened on May 9, 1917 and here is the Moon chart for the same – 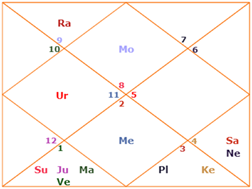 If that was not all, this combination is rendered very weak by Saturn’s 10th aspect. So, the weak sixth house has given very clear indication of 1918 Spanish Flu Pandemics.

Economic Forecasts for 2020 based on Guru-Cycle Chart

Everybody wants to know whether the world economy is slipping into recession and for this, the Guru-cycle chart gives some answers

If we draw a comparison of this Guru-Cycle chart with the current year’s (Coronavirus year) chart, we can see one similarity. In the current year’s Jupiter cycle chart (of 2019-2020), 5 planets are there in the 12th house and here, in this chart, 4 planets are there in the 6th house aspected by Saturn. Adding to what I had written in the last article, as the five planets are there in the 12th house of expenditure and loss, we can expect a severe impact on the global economy as well. Lord of the 2nd house, the house of income, is also situated in the 12th house which is going to impact the world economy in a rapid way. As the new Guru-cycle will be starting only January 29, 2021, we will have to stay tight and hope for the best for the world economy.

I hope this research of the Guru-Cycle chart will help predicting global events like Pandemics, disaster, recession and crises with better accuracy in future.