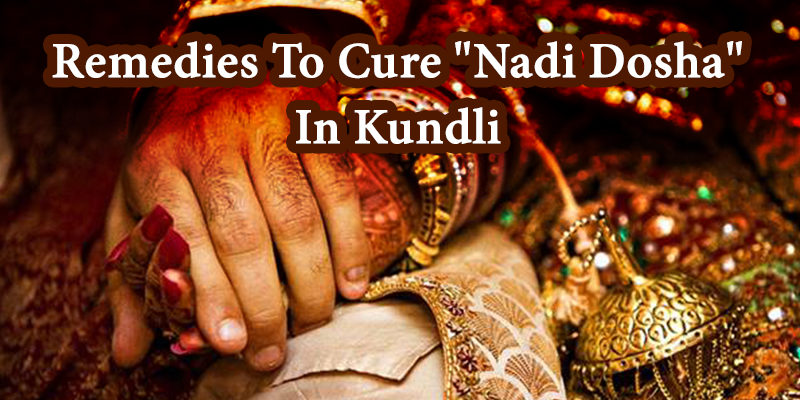 With Chaitra Navratri’s end approaching ending soon, let happiness knock on your doors. AstroSage is running a sale with bumper discounts on all major astrology products and services. Click on the button given below to know more about it.

Let us now get to know more in details about Nadi Dosha and how it can create problems in one’s married life.

According to Indian Astrology, while solemnizing a marriage, Nadi is considered as one of the biggest factors during Ashtakoot Milan. Nadi Dosha is amongst the fatal and inauspicious kundli doshas in Guna Milan when carrying out Kundali Milan. It is believed that the presence of Nadi Dosha can even lead to one of the partners’ death or sometimes both the partners could face troubles.

In the event of Nadi Dosha being present, the match isn’t usually given a thumbs up. You can click here to know more about the doshas in your kundali and get accurate solutions to the problems occurring in your life due to these defects by experienced astrologers.

To Connect With Astrologer Sunil Barmola On Call, Click Here

Narada Purana has several evidences that state that even if the bride and groom are attaining a favourable match-up during the Guna Milan but the kundali engender the Nadi Dosha, then this can not be avoided as this Dosha brings misfortune for the couples in many ways. Such relations either go through hell like suffering, frequent rows or don’t last long.  Not just this, both or one of the partners might die an early death.

Nadi Dosha and its Effects

This is very important to know that does Nadi Dosha really give you such a perilous experience or is this just exaggeratedly presented to us? To know this, we should first be aware of what Nadi Dosha is all about and how it is formed in your kundali.

Nadi is one of the eight gunas that are used to calculate the compatibility with your partner.  During the process of matching the gunas, eight points are matched which are also termed as ‘Ashtakoot Milan‘. These eight koots are – Varna, Vashya, Tara, Yoni, Grih Maitri, Gana, Bhakoot and Nadi.

According to the Vedic Astrology, there are three types of Nadi –

Each person’s birth chart shows the presence of the Moon in a particular Nakshatra, which determines that native’s Nadi. there are a total of 27 Nakshatras through which the above three Nadi; i.e. Adi, Madhya and Antya forms. Out of the total 27 Nakshatras, the presence of Moon in the group of nine special nakshatras leads to the formation of one Nadi in a native’s kundli, which has 8 points.

According to the popular conception, when both the partners belong to Aadi Nadi, there are strong chances of separation and divorce. When the bride and groom both belong to Madhya Nadi or Antya Nadi, the results may lead to the death of both or one of the partners.

Also, click on the button given below to know more about the ongoing AstroSage Navratri Sale.

There are few exceptions in Nadi Dosha that can be considered if the rest of the things are matching. (“Parihar” means the act of avoiding something or the task of eliminating faults, evil etc.)