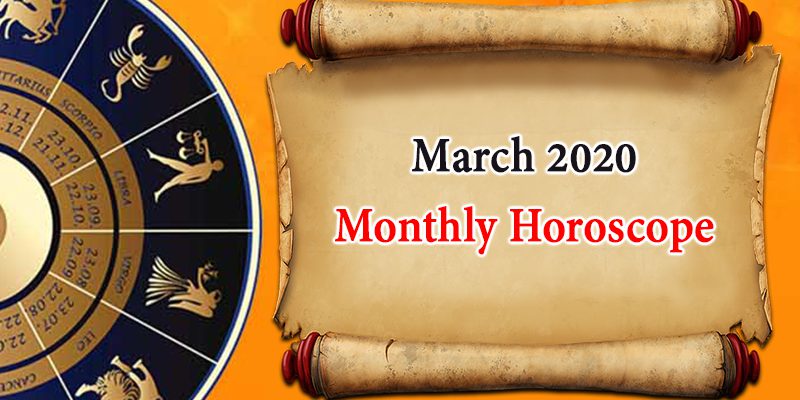 March 2020 Monthly Horoscope is Out! Find out what’s in store for you

Wondering how the new month will treat you? As we are stepping in the month of March, we have brought to you a specialized set of predictions based on your Moon sign.

Get Instant Solutions For Your Problems! Ask a Question Now

This monthly horoscope for March contains exclusive details about each and every zodiac sign, thereby giving away some crucial details about the upcoming time of your life. Additionally, find out the various planetary movements taking place this month, which will definitely leave an impact on your life .

With our monthly horoscope, you can find out what’s special in store for you this month. Along with this, also find which natives will be lucky in love and which ones will have to wait more to see the face of success and happiness.

Business personnel can also find out how long they have to wait to witness their dreams taking flight. Also, what about your professional life? You can get all of these answers by easily going through our monthly horoscope.

Before moving on to the predictions, let us quickly take a look at this month’s Hindu Panchang, planetary movements and all the major highlights of this month.

Hindu Panchang of this Month

If we talk about the festivals and events taking place, then this month will be quite a colourful one. Devotees will take part in various auspicious functions and celebrations. Check out the detailed list of all kinds of festivals and fasts taking place during this month’s time. For your convenience, we have added the dates of the specific festivals too.

Get More Details About the Upcoming Festivals of March

According to Vedic astrology, three major planets are changing positions and places during the month of March. These are Sun, Venus and Mars respectively. Along with this, the planet Guru or Jupiter’s transit is also taking place during this month. Naturally, all of these planetary movements will leave profound impacts on natives belonging to all the twelve zodiac signs. Under the influence of these respective transits, some people may see the face of a favourable time, while some others may come into terms with various kinds of troubles. Let us now take a look at the transit dates of the above mentioned planets.

The Share Market Predictions for March state that during this month, the planets Sun, Mercury and Rahu will remain posited in the zodiac sign Aquarius. Meanwhile, Mars and Jupiter and Ketu will remain situated in Sagittarius zodiac sign.

On the 10th of March, Mercury situated in the zodiac sign Aquarius will start moving in a direct motion. These conditions will bring positivity to the Shares associated with Banking (HDFC), Insurance, Paper (West Coast, Tamil Newsprint, Trident), Logistics (Blue Dart) and Tire Sector Companies.

Investors will be interested in acquiring shares of white goods, companies (Blue Star, Amber, Whirlpool). The shares of companies which belong to the sectors of Power, Electrical and Gas(IGL) will increase from the 13th of March onwards. Profit booking can be seen from 18th to the 20th of March. Also, the index will decline at the end of the month. At this time, investors will be inclined towards buying gold. In such a situation, according to the prediction of the stock market 2020, there may be positive changes in the stock market from March 27 onwards.

Due to the transit of four planets (Sun, Mars, Jupiter, Venus) this month, the zodiac signs Taurus, Capricorn, and Pisces will be affected, in your birth chart. Therefore, the second, tenth and twelfth houses of your natal chart will be acti….Read More

As per the monthly horoscope for Taurus natives, the transit of four planets will activate the first, ninth, and eleventh houses in their birth chart. The first house is known as the House of Self, the ninth bhava of religion, whereas the…Read More

The transit of the four planets (Sun, Mars, Venus, Jupiter) activates the twelfth, eighth, and tenth houses in your birth chart. In one’s kundali, where the twelfth house signifies expenditure, loss, and foreign trip, the eighth house represents longevity, and the tenth pertains to their……Read More

This month is activating the eleventh, seventh, and ninth houses of Cancer natives due to the transit of four planets (Sun, Mars, Jupiter, Venus). The eleventh house in one’s birth chart is the significator of profit, as well as income, accomplishments, and elder siblings of the native. On the other hand….Read More

As four planets (Sun, Mars, Venus, Jupiter) make their transits, they activate the tenth, sixth, and eighth house in your birth chart. The tenth house is that of your karma indicating your workplace, job, business; while the sixth house signifies one’s enemies, diseases, and…..Read More

This month, the transit of the four planets, namely, Sun, Mars, Jupiter, and Venus will activate the ninth, fifth, and seventh houses in your birth chart. The ninth house corresponds to religion in the kundli, and we can learn about the native’s religious inclination, pilgrimages……Read More

Discover the Muhurat and Interesting Facts About Holi 2020

The eighth, fourth, and sixth house of Libra natives will activate this month, due to the transit of the four planets namely. While the Sun makes its transit at the beginning of the month, the middle of the thirty days will host the transits of Mars and Venus. Soon afterwards……Read More

The transit of the four planets, Sun, Mars, Venus, and Jupiter, will cause many changes this month. Primarily, they will activate the third, fourth, and seventh houses of your birth chart, directly affecting the signs……Read More

The transits of four planets (Sun, Mars, Jupiter, Venus) will activate the three houses of your birth chart that they move through; namely second, fourth, and sixth. In Vedic Astrology, the second house of Taurus sign…..Read More

The first, third, and fifth houses of your birth chart will be in an active state as the planets, Sun, Mars, Venus, and Jupiter make their transits through them. As a result, these active houses will affect the lives of……..Read More

The four planets (Sun, Mars, Venus, Jupiter), as they make their transit through your second, fourth, and twelfth house will activate them. The second house informs one about their wealth and speech, whereas the fourth house….Read More

As Sun, Mars, Venus, and Jupiter make their transits through your first, third, and eleventh houses, they will activate the latter. As a result, these houses will directly affect Pisces natives, bringing significant changes in……Read More