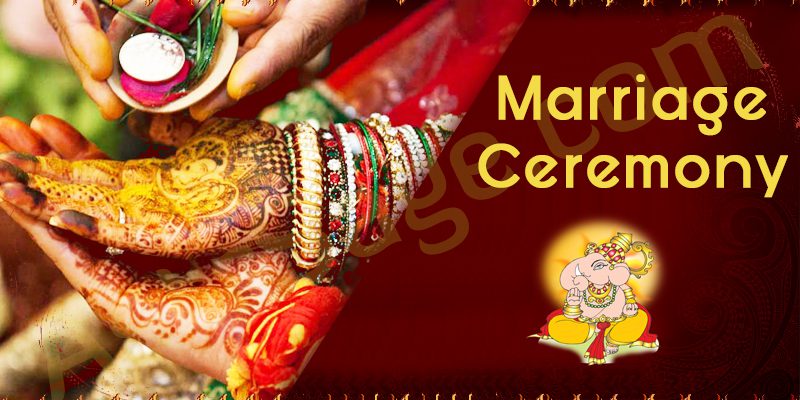 Marriage is known to be the sacred bond of love. The husband and wife swear to remain by each other in happiness and misery. With the existence of this relationship, two souls, along with two bodies, unite and become “one”. Along with it, two families come together and share their emotions with each other. In Hinduism, Vivah Sanskar, also called as Marriage Ceremony, is said to be the thirteenth among sixteen sanskars. After this ceremony is conducted, a person steps in his/her marital life.

In Vedic scriptures, the person’s life has been divided into four life stages or Ashrams. The first Ashram is Brahmacharya, where the person focuses on education and good conduct. The second is Grihastha (householder), where the person experiences the worldly life and happiness and sorrows that comes with it. During this stage only, a person gets married. After this, third is Vanaprastha, where the native gives up on materialistic life and the last is Sannyasi Ashram, which literally means renunciation.

Out of these ashrams, the best Ashram is considered to be Grihastha. It has also been mentioned in a verse, “धन्यो गृहस्थाश्रमः / “dhanyo gṛhasthāśramaḥ”, which means that the stage of Grihastha (household) is the best of all four ashrams.

A man and a woman fulfills their existence with the help of marriage rites and ceremony. It adds to their overall personality. Therefore, marriage is considered to be an important point of human life. According to Vedic scriptures, this ritual also frees one from ”Pitra Rin”. Actually, a human is tied down to three “debts” or “rins” from birth. These include “Dev Rin”, “Rishi Rin” and “Pitra Rin”, i.e. debt towards God, Teacher and Father/Ancestors.

Explaining the word marriage or vivah, it is a combination of two words, which when literally defined, means bearing the responsibility. In Hinduism, husband and wife complete the seven circles around the sacred fire under the attestation of the Polar Star and pledge to remain faithful and supportive towards each other. The main objective of marriage ceremony is not only to enjoy physical pleasures but also to lay the foundation for a family.

That Is Why Marriage Rites Are Important

A wedding becomes meaningful after conducting the vivah sanskar ceremony as per vedic traditions. According to this ritual, horoscopes of bride and groom are matched. From childhood, we have been told that marriages are made in heaven, and its sanctity is undeniable. Hecne the act of horoscope matching is a way to reconcile the couple back together in the mortal world. Every native who wishes to get married desires for a good and supportive life partner. But there are instances of arguments, disagreements and differences in opinions, which can sometimes lead to separation. In order to avoid such cases, kundli milan or horoscope matching is done and aspects are matched.

In the Indian society, marriage ceremonies are considered as opportunities to carry out traditional customs and special gestures. That is why a well-matched marriage brings two families together, but if things don’t work out in any case, situations can take a turn for the worst. Therefore, an auspicious muhurat or time is calculated before commencing any task as per Hindu traditions. Under the same ritual, doshas and guns (aspects) of the bride-groom are matched and if everything goes well, an auspicious muhurat is calculated for further ceremonies.

What is Vivah Muhurat or Auspicious Time for Marriage?

As described above, Marriage is a significant ritual in Indian society. Before going ahead, horoscopes of girl and boy are matched and aspects are calculated. Marriage Muhurat is analysed on the basis of name signs of Bride and Groom. There is no specific rule to calculate the auspicious time for vivah sanskar ritual. Marriage is a lifelong bond, therefore, one must not take hasty decisions. Hence, go to an experienced astrologer and ask for his guidance when calculating the auspicious time period for marriage.

According to Hindu rites and rituals, Tulsi Vivah is strongly associated with marriage ceremony sanskar. It is celebrated exactly one day after the Ekadashi in the month of Kartik. On this auspicious day, the Basil or Tulsi plant is beautifully decorated like a bride. At the same time, the idol of Lord Vishnu is placed besides her as a groom. Then both of them are tied together with a string of Silk. Marriage mantras are chanted during these rituals and vermillion coloured rice is showered from above to solemnize the wedding. Hence from this day onwards, the marriage season commences.

As per Vedic Astrology, birth chart of the natives are analysed in order to give life predictions. Seventh house in a kundli is a significator of marriage and evaluated to know more about marital life, spouse and marital opportunities and challenges. For eg. if Mars is posited in this house, then Mangal Dosha is formed and the native becomes Manglik. As a result, s/he may have to face delay or obstacles in marriage. Therefore, before commencing any ritual for marriage, this house is analysed.

Before commencing the ceremony, some important marriage rituals are performed. If both boy and girl have given the approval for marriage, then the Tilak ceremony is organized. It goes by the name “Roka” in regional language. According to this ritual, family of the bride do the Tilak of the groom and gives him several gifts.

Although, the current trend is exchanging engagement rings before marriage and fixing the marriage. This ceremony basically solidifies the pact and engages both the girl and boy as future partners. Apart from Hinduism, this ceremony is celebrated with love and happiness in other religions.

In India, the ceremony of applying turmeric paste is organized on the day of marriage. This is a mandatory ritual to perform. As per the tradition, applying turmeric is considered to be an auspicious omen, as it is believed that applying its paste adds to the beauty of both bride and groom. From scientific point of view, Turmeric contains antioxidants and enrich the skin. It gets rid of skin allergies and infections and acts as a medicine. On the other hand, it nullifies the negative energy around the house during marriage. It is believed that due to these miraculous properties of turmeric, it has been implemented into the Hindu wedding ceremony.

One of the rituals is exchanging garlands or Varmala. It is also called as Jaimala. As per Hindu Vivah Padhdhati, this ritual is performed from ancient times. It is also described as the Gandharva Vivah in Hindu scriptures. In the ancient times, Swyamvar was organized, and one of the most famous Swyamvars that clicks in one’s mind is of Goddess Sita in the Treta era.

It is well-known that when Lord Shri Ram broke the bow, named Pinak, then only Mother Sita went ahead and put the garland around his neck, hereby accepting him as her dutiful husband.

In this ritual, bride-groom exchange garlands and accept each other as life partners.

As a rainbow consists of seven colours, music contains seven notes, week has seven days, similarly marriage ceremony comprises of seven pheras or circumambulations. This is considered the most important ritual on the day of marriage. This is why these seven circles around sacred fire must be taken in order to solemnize the marriage ceremony. During these pheras, bride and groom pledge to remain by each other’s sides for seven lives under the Polar Star. following is the meaning of every Phera:

Kanyadaan is considered to be the biggest “charity” of all in the whole world. In simple words, parents of the bride give away their daughter to the groom’s family, and this act is called as Kanya Daan. As per Vedas and Puranas, the groom is considered as a form of Lord Vishnu. It is said that during the ritual of Kanya Daan, the father of the bride gives away his daughter on one assurance, that the groom takes good care of her and protect her during hard times.

The last ritual during marriage ceremony is Vidai or Bidding Farewell, which can prove to be painful for the bride’s side. During this ritual, parents, siblings and relatives share their sorrows of departure and wish for a better life for their daughter. Also, the bride shed tears of farewell and get emotional while reminiscing about her childhood and moments. With this, the Marriage ceremony comes to an end.

We hope that the information related to the wedding rituals will prove useful to you. Keep coming on our website for more content.