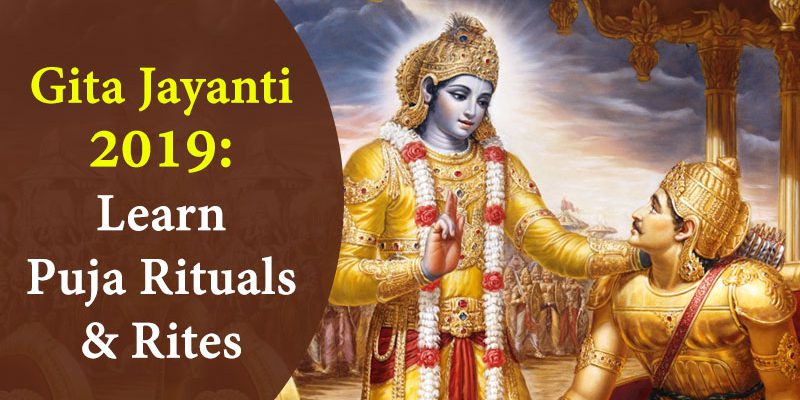 Shreemad Bhagwad Gita, which forms the psyche of Hindu consciousness and the occasion to celebrate its anniversary is known as Gita Jayanti. Read more about the rites and rituals to follow on this day.

Bhagavad Gita is universally acknowledged as the psyche of Hindu religion and culture. Thus, it is given a quite a celebratory status and followed by each and every follower of Hinduism. The discourse of this sacred Hindu text began during the time when the much talked about Kurukshetra war was going on. It is again a grand chapter in the pages of Indian history and civilisation. Shree Krishna preached the whole Gita to his friend and companion, the great Arjuna. Ever since then, the Gita has been given the supreme status among all the other religious texts followed by the Hindu community people. In the current year, Gita Jayanti will be celebrated today i.e. 8 December, 2019. As per the Hindu Panchang, this day happens to be Ekadashi Tithi of Margashirsha month’s Shukla Paksha. Considering the fact that this festival is colliding with the Mokshada Ekadashi Tithi, its importance increases to a great extent. As the name suggests, the Mokshada Ekadashi fast is kept to let go of all temptations prevailing in one’s heart and mind. Let us now have a look at the auspicious Muhurat of this festival during the year 2019.

Note: This Muhurat is applicable for New Delhi area only. Click here to know the valid Muhurat for your town or city.

Highly regarded as the most sacred text of Hindu culture and religion, Bhagavad Gita occupies a special place in the hearts of all those who follow the realm of Hinduism. It is not just any other book wrapped in a red piece of cloth, but has significant life lessons to offer as well. Each and every thing that is part of this Universe, finds a mention in the Gita. What is not available here, does not exist anywhere so far. The text not only removes the darkness of ignorance from one’s life, but also provides one with enlightenment by helping him/her learn all the necessary teachings of life. Needless to say, a grand day marking the birth anniversary of this special text should be celebrated in a magnificent manner. As mentioned above, this day also coincides with Mokshada Ekadashi, which is why natives will be seen observing the Ekadashi fast on this day. Along with offering prayers to Shreemad Bhagwad Gita, devotees will also pay reverence to Lord Krishna and Sage Vyasa as he is the one who narrated the entire story of Mahabharata to Lord Ganesha.

END_OF_DOCUMENT_TOKEN_TO_BE_REPLACED

Gita Jayanti in the Pages of Mythology

Each and everyone of us is aware that the roots of Gita Jayanti lie in the grandiose epic,  Mahabharata. It mentions the occurrence of the great war between Kauravas and Pandavas, which is said to have went on for a period of eighteen days. The discourse of the Gita took place right before the commencement of the war. The mighty Arjuna asked Lord Krishna, who happened to be his charioteer, to take the chariot to the middle of the battle field. Arjun was one of the Pandavas, the five sons of Pandu, and his heart sank because he was about to fight his near and dear ones, his own cousins and family members. After numerous attempts of reconciliation failed, he went into a state of disillusionment. He failed to carry out his duties which he had to perform as a Kshatriya. As a result, he seeked his friend and companion, Lord Krishna for help. What later followed is a series of teachings and preachings endorsed by Lord Krishna, which were compiled together to be known as Bhagwad Gita later. The day on which Lord Krishna preached these teachings to Arjun happened to be the Ekadashi Tithi of Margashirsha month, which is why this day is marked as Bhagavad Gita’s birth anniversary and celebrated with great fervour all over the nation.

Along with the celebrations of Gita Jayanti, the Mokshada Ekadashi fast will also be kept by natives. Also, there are some special set of rules which should be followed on this day. Some of them are mentioned below:

We hope that you like this blog of ours on Gita Jayanti. May you remain enlightened all throughout your life and keep learning from Shrimad Bhagwad Gita. Thank you for staying connected with us!!