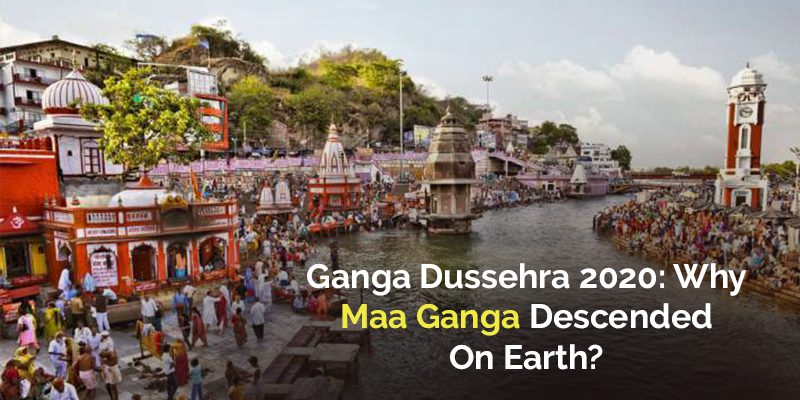 The festival of “Ganga Dussehra” or “Gangavataran” will be celebrated on Monday, June 1, 2020. According to the religious scriptures, Ganga descended on Earth on the Dashami tithi of Shukla Paksha during Hasta Nakshatra in the month of Jyeshtha.

On this day, activities such as bathing in the Ganges, using the holy water, donating and performing charity, and carrying out worshiping rituals are considered fruitful. Thousands of devotees take a dip in Ganges in Haridwar and Varanasi on the occasion of Ganga Dussehra. However, you should avoid visiting such crowded places this year since the government has issued guidelines regarding social distancing in view of ever-increasing cases of Coronavirus.

In Hinduism, the Ganges river has acquired the title of “Maa” or “Mother”. Considered extremely sacred, the Ganges originates from Gangotri in Uttarakhand and passes through many important locations in India. Gangajal offers virtue to a native and eliminates his/her sins.

We know how he descended on the Earth, but are you aware of the reason why this happened, and how fasting and performing puja on this day helps to gain desired results. Through this article, we will shed light on such topics related to Maa Ganga and Ganga Dussehra. Along with that, you will be guided with how to perform the rituals at home amid Corona times and venerate Maa Ganga.

Perform Puja, Snan or bathing ritual and make donations in this muhurat:

Ganga Dussehra is viewed as a significant religious event in Hinduism. Auspicious tasks such as Puja recitation, conducting Hawans and events such as Mundan ceremony are carried out on this day. One gains riddance from ten different types of sins performed by a native in his/her life knowingly or unknowingly.

It is believed that anything donated must be ten in quantity. According to the Puranas, Ganga descended on the Earth on this day, so bathing in the river Ganges is also considered very auspicious. But this year, it won’t happen due to the ongoing nationwide pandemic. Hence, you can mix the Gangajal available at home with your bathing water and venerate Maa Ganga with devotion. Worshiping the Ganges on the day of Ganga Dussehra helps one attain salvation.

Why Is Ganga Dussehra Celebrated?

According to a popular story of Ganga Dussehra, Maa Ganga used to reside near the feet of Lord Vishnu. Once, Sage Bhagirath was in a dire need of flowing water in order to immerse the ashes of his ancestors. For this, Sage Bhagirath performed harsh penance to appease Maa Ganga. Pleased with his act, Maa Ganga descended on Earth, but due to the rapid flow of the water, Bhagirath could not immerse the ashes properly. Then the Goddess revealed that it is possible only if Lord Shiva fills her in his matter hair and directs her current flow across the mortal lands of the Earth.

After hearing this, Sage Bhagiratha meditated while enduring all the hardships in order to appease Lord Shiva. Pleased with his penance, Lord Shiva accepted the request. He divided his matter hair into seven streams named Nalini, Hridini, Pavani, Sita, Chakshu, Sindhu and Bhagirathi. Among them, Bhagirathi became famous as Ganga. Ganga is considered to be a source of salvation in Hinduism. She is also hailed as the sister of Maa Parvati at several places. She is considered to be a better half or an Ardhangini of Shiva and still lives in Shiva’s hair.

As per the scriptures, Goddess Ganag used to reside in the Kamandala of Lord Brahma. Taking a dip in the Ganga, who emerges from the feet of Lord Vishnu and gets draped in the matter hair of Lord Shiva, helps one attain the holy blessings of Lord Vishnu and Lord Shiva together. The river Ganga emerges from a cave named Gomukh, a few kilometers above the Gangotri ranges and ends at the Gangasagar in the Bay of Bengal.

Due to Ganga river merging in the ocean, this place has been named as Gangasagar. From Gangotri to the Ganga Sagar, the river Ganges is known by about 108 different names. These 108 names are also mentioned in the Puranas, but eleven of these names are quite popular, which are Jahnvi, Tripathaga, Uttar Vahini, Durga, Mandakini, Bhagirathi, Dev Nadi, Hooghly, Shivaya, Mukhya, and Pandita.

Items To Be Donated

Following the worshiping rituals eliminates all kinds of sins and leads to attainment of prosperity. This year, due to Coronavirus scare, every person around the world has become increasingly aware of his/her health. This can at times lead to excessive stress and frustration since people are locked within the four walls of their homes. In such a situation, worshiping Maa Ganga will help you attain peace. But you are advised to avoid going to crowded places and celebrate the festival of Ganga Dussehra while staying in your homes.

Hope you like the information given by us on Ganga Dussehra. Thank you all for being a part of AstroSage. Stay safe and healthy!!