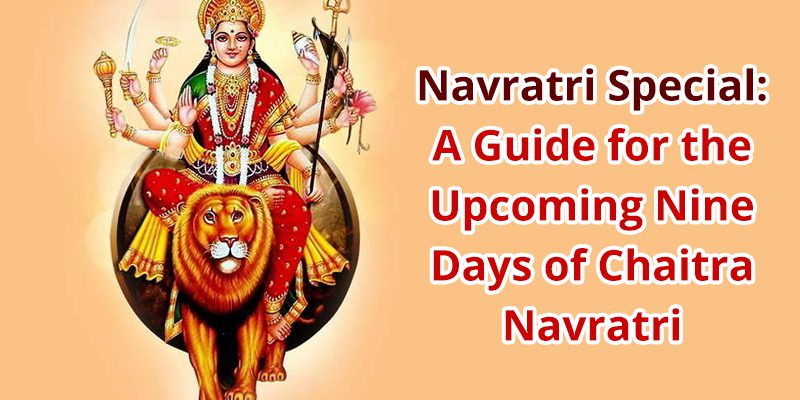 Chaitra Navratri is beginning from the 25th of March onwards. When it comes to festivities of Hindu religion and culture, Navratri happens to occupy a special place. Navratri is a word borrowed from the Sanskrit language, which can be translated as “ nine nights”.

The nine forms or incarnations of Goddess Durga are worshipped during the nine nights. Each and every state add their special flavours to the celebrations of Navratri, but Goddess Durga’s reverence is the common thread that joins the dots of the country together.

The devotees of the Goddess try their level best to appease her during these nine nights of Navratri, for which they follow all the rites and rituals very religiously. They pray to her to eradicate all kinds of pains and sufferings from their lives. All throughout the nine days, people are seen fasting and praying to the Goddess and her different incarnations. Despite having such unquestionable faith on Maa Durga, many of you are unaware of many things pertaining to the Goddess and the festival of Navratri.

How many of you know why Kanya Pujan is organised during the last day of Navratri? What are the convenience mediums of the Goddess? Which offerings should be made to Maa Durga? What are the different colours associated with the nine days of Navratri and which Mantras should be chanted?

How Many Navratris are Celebrated in One Year?

As per the Devi Puran, four Navratri sessions arrive during the course of a year. Two of them are celebrated openly (Chaitra and Sharad) and the other two remain under the cover and are celebrated secretly (Asahd and Magh). The first Navratri arrives during the first month of the year according to the Hindu Calendar, which is Chaitra.

Navratri Dates This Year and Upcoming Ones

The Navratri taking place in a period of one year also arrive during the cusp of various seasons. The climate changes extensively during the Chaitra Navratri as the summer season seeps in.

Hence, there are quite a few risks of falling prey to various kinds of ailments. The fast observed during Navratri builds one immunity and the concerned native also acquires mental strength. One’s thoughts and the entire physique also gets purified.

Ghatasthapana on the First Day of Navratri. Why is it Observed?

The Puranas state that the Kalash or urn is a representation of Lord Vishnu. This is the reason why people commemorate the Kalasthapana before worshipping Goddess Durga.

How to Commemorate the Ghatasthapana?

On the first day of Navratri, auspicious time and way should be taken into account for the Ghatsthapana. Sow barley or wheat in an earthen pot or construct a clay altar at the place of worship. Now take another kalash or earthen vessel and tie a molly on its neck and apply tilak on it and fill it with water. Put akshat, betel nut, coin etc. in the urn. Now take a coconut and wrap it in red cloth.

Tie the coconut and the cloth with a Raksha Sutra. After preparing these things, clean a piece of land and place a vessel containing barley, after that place a vase full of water, then place coconut on the lid of the urn. Now Ghatasthapana process is complete. Durga Mata and Shaligram should be worshiped by making a swastika symbol on the Kalash. Keep this urn in the temple for nine long days. Add water to the urn in the morning and evening as needed.

Which Goddess should be Worshipped : Know the Chronology As per Tithis

What are the Meanings of the Nine Names of Goddess Durga?

If you wish to read the day wise details upcoming Navratras, then you can visit this page

Why is Barley Sown During Navratri?

There is a very crucial reason behind sowing barley seeds during Navratri. This tradition signifies that jow or barley is a grain and it is a form of Lord Brahma and we should respect whatever we eat. Apart from this, religious considerations also state that barley was the first grain which came into existence in the Universe.

Why is Kanya Pujan Done During Navratri ?

Small girls are considered to be an incarnation of Goddess Durga and are also believed to be a representation of positive energy. Hence, they are worshipped specifically during the nine days of Navratri.

Classification of Girls as Goddesses on the Basis of their Age

Why Boys are Referred to as Bhairav During kanya Pujan?

Lord Shiva has kept Bhairava along with the Shakti Peethas to serve Goddess Durga, which is why it is necessary to worship them while worshipping the Goddess. This is the reason why a small boy is also revered as Bhairav while conducting the Kanya Puja.

At the same time, if the day of Thursday and Friday happens to be the first day of Navratri, then the mother’s ride is a palanquin. And if Navratri starts from Wednesday, then mother Durga comes riding on a boat.

When Will You Strike It Rich? Know With Raj Yoga Report

What are the Different Vehicles of the Goddess?

Which Modes of Maa Durga’s Convenience are Auspicious?

Find Your Accurate And Precise Life Readings With Personalized Horoscope 2020

Beej Mantras – For the Nine Days and Nine Goddesses

Do not forget to Make these Offerings During the Navratri

Who is the Husband of Goddess Durga?

Goddess Durga is considered to be the consort of lord Shiva.

We hope that you like this blog of ours on Navratri. Thank you for connecting with us!!