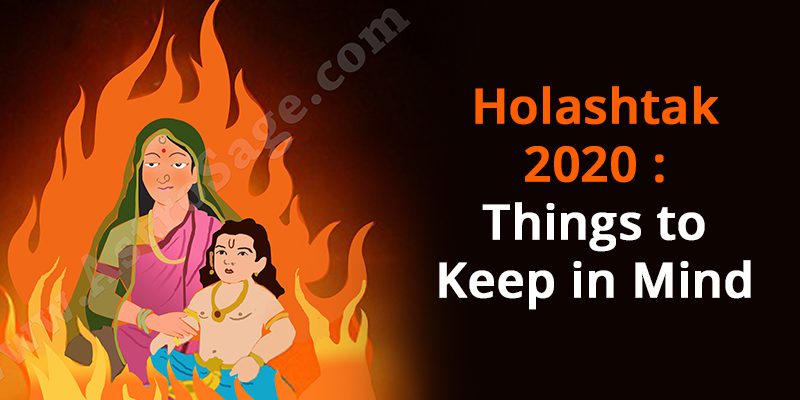 The amalgamation of two words Holi and Ashtak, Holashtak signifies the eight days before the festival of colours, Holi

The entire nation is busy making preparations for the festival of colors, which is arriving shortly. The time period between Phalgun Shukla Ashtami and Holika Dahan is known as Holashtak. As per the religious Scriptures or Shastras, it is forbidden to commemorate any auspicious activity during these days. This year, Holashtak will begin on the third of March and remain valid until the ninth of March.

Holashtak Begins – What Should be Done?

The tradition of collecting wood, twigs and other necessary items for Holika Dahan is carried out during Holashtak. Also, Lord Krishna and Lord Shiva are worshipped during this time period.

During the various days of Holashtak, people also follow the rite of playing Holi with various items. It is believed that any attempts made with the purpose of love, affection and happiness are definitely granted success.

One of the many legends prevalent about Holashtak suggests that Prahlad, the most humble devotee of Lord Vishnu went through some heart-wrenching tortures during these days.

For your further information, we would like to tell you that the day when Hiranyakashyap held Prahlad captive happened to be the Shukla Paksha’s Eighth Tithi of Phalgun month. It is from this very day that various sorts of cruelties were heaped upon Prahlad.

Know your Child’s Future Better With Board Results Exam Predictor

Prahlad was an avid worshipper of Lord Vishnu, because of which he had to go through many tumultuous trials and at the end, it was only the benediction of Lord Vishnu who saved him from all kinds of atrocities.

In such a situation, Holika entered the scene to help her brother Hiranyakashyap when he was in distress. She was provided a boon that no fire on earth could set her body ablaze.

Considering the advances she possessed, Holika took Prahlad on her lap and sat on the pyre. Lord Vishnu immediately rescued Prahlad, but Holika was reduced to ashes. The continuous torture that Prahlad went through during these eight days remains the reason why it is considered inauspicious to conduct any holy activity in the concerned time period.

Things to Avoid During Holashtak

Even Though the auspicious activities are prohibited during this time, there are no such restrictions to carry out the necessary rites and rituals commemorated after one’s birth and death. Let us now get some exquisite details of those tasks which should be prohibited during these eight days.

Things to Do During Holashtak

As it has been said, auspicious works are said to be forbidden during the period of Holashtak, but there are also some tasks which ensure the inflow of positive outcomes. Let us take a look at them.

The period of eight days known as Holashtak is an epitome of power and strength. Beliefs state that you can earn special blessings by getting involved in meditation and austerity.

It is customary to cut a branch of a tree on Holashtak and place it in the ground. After that, colorful clothes are tied on this branch. Readers should also know that this branch is considered to be an incarnation of Prahlad.

Know More About the Upcoming Festivals of March

Discover the Muhurat and Interesting Facts About Holi 2020

Out of many beliefs prevalent with these eight days, one states that thoughts of despair, doubt and negativity take house in one’s mind during these days. Hence, it is quite possible for the scheduled tasks to gain the expected momentum, if they are carried out in this duration. Hence, it is better to postpone all the necessary and important events and projects.

Once the Holashtak comes to an end, people take part in the festival of colours and paint the town red with prosperity and happiness.

We wish you all the very best for the upcoming days of your life. Thankyou for connecting with us!!