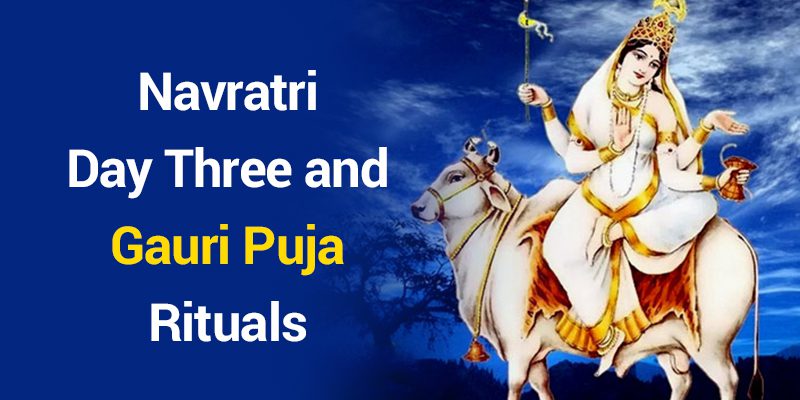 On the third day of Navratri, Goddess Chandraghanta is to be worshipped by duly following all the rites and rituals. The fiery Goddess comes riding a lion and her body seems to be plated with radiant Gold. She has 10 arms and out of which she carries Trident, Mace, Sword, and Kamandalu in her four arms.

Goddess Chandraghanta removes all kinds of fears and doubts from the minds of her devotees. The Goddess has a bell (Ghanta) shaped Moon(Chandra) on her head, due to which she is called Chandraghanta Devi. while worshipping this particular deity, it is advised to chant a particular mantra which is mentioned below.

How to Worship Goddess Chandraghanta

Find Out How Strong is your Immunity with the Immunity Calculator!

Goddess Chandraghanta is considered to be the epitome of power and prosperity and she is worshipped during the third day of Navaratri. Her clothes are red blood in colour. Maa Chandraghanta governs the Manipura Chakra according to the esoteric studies, which is directly related to Mars in astrology. In such a situation, if dark red clothes are worn while worshipping Chandraghanta Devi, then there are chances of the native coming into contact with unlimited peace and prosperity.

As per astrological considerations, Goddess Chandraghanta rules over the planet Venus. Hence, worshipping her also negates the malefic effects of the morning star, Venus.

As devotees will be seen worshipping the Chandraghanta incarnation of Goddess Durga on the third day of Navratri, many will also be seen taking part in the festivities of Gauri Puja or Gan Gaur. Let us find out the significance of this festival.

For married female natives, the fast kept during Gauri Puja is of special importance. Women worship Goddess Parvati with great devotion on this day and plead her to fulfil their wishes. Gauri Pujan is observed to ensure the inflow of happiness and prosperity in one’s life. It is believed that if Goddess Parvati is pleased with the fast observed by devotees on this day, she fills one’s life with happiness and prosperity.

This fast also proves to be quite impactful in improving the relationship between a husband and wife. Apart from this, if you are facing any problem related to marriage or in getting married, or else if you wish to get married to a desirable partner, then this fast will prove to be quite effective for you.

We hope that you will appreciate this blog of ours on Navratri and Gauri Puja. Thankyou for connecting with us!!