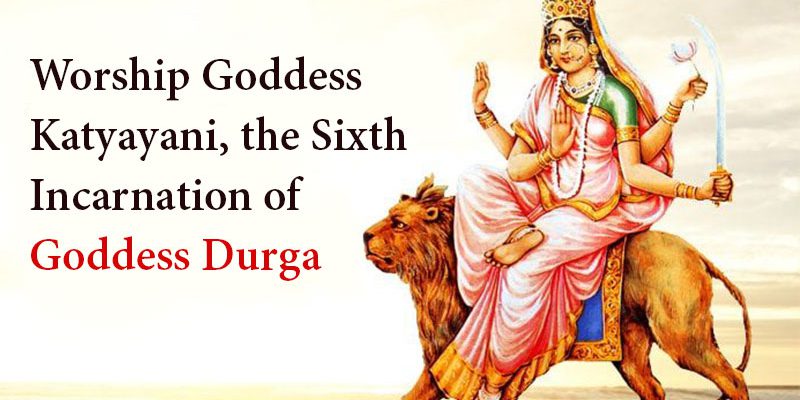 On the sixth day of Navratri, the tradition of worshiping Goddess Katyayani, another incarnation of Goddess Durga. Even though all the nine forms of the Maa Durga are considered to be very attractive, this incarnation of the Goddess is described as compassionate.

She was born to the sage Katyayan, due to which she came to be known as Katyayani Devi. Her body seems to be radiant and shiny and gold. The Goddess comes riding in a lion and has four arms. Mata Katyayani holds a sword in one hand and a lotus flower in the other. The remaining two hands of the mother are in Var Mudra and Abhaya Mudra.

Basically, by chanting this Mantra one is seeking blessings from the Goddess who comes riding on a horse and destroys all demons and evil forces.

How to Worship Goddess Katyayani?

Which Colour Should be Worn While Worshipping goddess Katyayani?

Goddess Katyayani is also known as Mahishasura Mardini(the one who slayed Mahishasura). Katyayani Devi comes wrapped up in red clothes and her makeup also appears red. It is said that on the sixth day of Navratri, devotees try to concentrate on the Agya Chakra and the color of this Chakra happens to be blue. Therefore, wearing blue clothes on this day is favoured while worshipping Goddess. Readers should also know that the color blue (vivid blue color) also increases the favorable effects of Venus.

Worship Goddess Skandamata for these Benefits

According to the calculations put forth by astrology, Devi Katyayani is also the presiding deity of the planet Venus. So, the ill effects of Venus also come to an end after worshipping this particular Goddess.

Wish you a very happy and prosperous Navratri!!