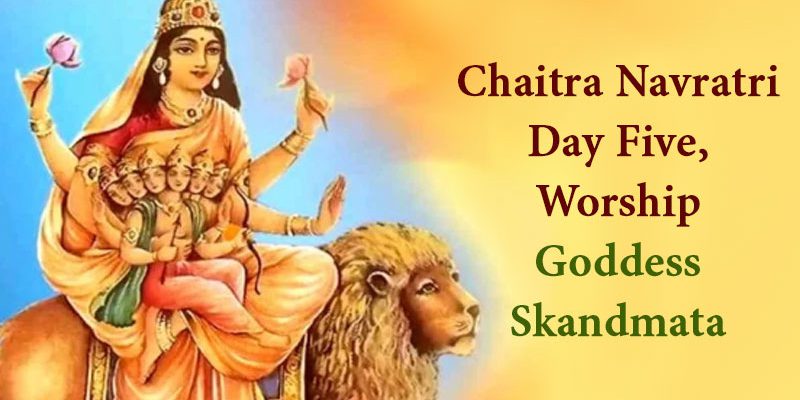 On the fifth day of Navratri, Goddess Skandmata is worshipped by duly following all the rites and rituals. She comes riding on a lion. Skandamata, the presiding deity of the entire solar system has four arms.

She holds a Skanda with the upper arm on the right side and has a lotus flower in the lower arm. This astonishing form of Skandamata is extremely beneficial for her devotees.

Those natives who wish to get the boon of a progeny are recommended to worship Skandamata with pure devotion. It is believed that the Goddess protects all of her devotees like she would protect her sons. This is the reason why she is considered to be the first ever woman with maternal instincts. Also because of being the mother of Skand kumar Kartikeya, she came to be known as Skandmata.

How to Worship Goddess Skandamata?

Which Colour Should be Worn While Worshipping Goddess Skandmata?

It is said about Goddess Skandmata that this particular incarnation of the Goddess is quite kind hearted and benevolent. Considering such a situation, it would be favourable if you wear orange or saffron coloured clothes and use them excessively on this day. The same should also be used while worshipping the Goddess too. Keep in mind only to use the above mentioned colours on this day only.

Worship Goddess Skandamata for these Benefits

As per the calculations put forth by astrology, Skandmata is also the presiding deity of the planet Mercury. So, when one worships the Goddess, the ill effects of Mercury also come to an end.

We hope that you will appreciate this blog of ours. Wish you a very happy Navratri!!