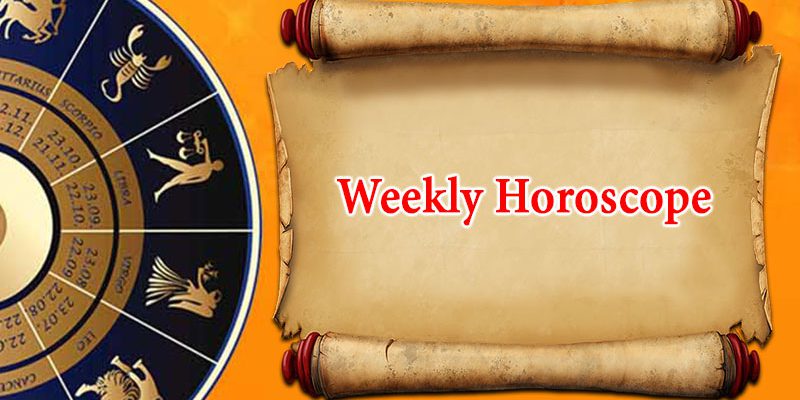 After minutely evaluating the placement of planets, stars and nakshatras, astrologers at AstroSage has generated detailed predictions for all twelve zodiac signs. In this blog, you will learn about various planetary transits taking place this week, festivals and fasts according to the Hindu Panchang, birthdays falling this week and much more. This horoscope gives you a sharp insight about your future and prepares you for what’s coming in your family, love, marital and professional life. Let’s move ahead and read how well this first week of December treats the natives of twelve signs. Also, know about Share Market predictions and invest carefully.

As per Hindu Panchang, the first week starts on the Sashti tithi during Shukla Paksha under Shravana Nakshatra, and will end on Ekadashi tithi in Ashwini Nakshatra during Shukla Paksha. Along with that, the planet Moon is seen placed in Capricorn in the starting of the week, and will transit through Aquarius, Pisces and Aries. Similarly, Mercury is undergoing transitory motion and will enter Scorpio sign during midweek. Mokshada Ekadashi, also known as Gita Jayanti, will also fall on 8th December, Sunday. Fasting on this day enables the native’s ancestors to attain Moksha or Salvation by resolving their sins and bad Karma.

The planet Mercury is known as the “prince” among the Navagrahas or nine planets. It is the significator of wisdom, knowledge, commerce and communicative abilities. As per the Kaal Purush Kundali, it governs the third and sixth house in a kundli, and rules over Ashlesha, Revathi and Jyeshta Nakshatra. Gemini and Virgo comes under its lordship. However, this planet is making a transit in Scorpio on 5th December 2019 around 10:22 AM. This transit will mark a major impact on the lives of natives of all zodiac signs.

Share Market seems to churn out mixed results during this week. In the beginning on 2nd December, there will be a rise in the market after the stocks of Silver, Rice, Beverages & Petroleum sector companies will see an inflation. On 3rd December, the market doesn’t seem very enthusiastic for traders and businessmen. On 4th December, IT, Communication, Software, and Electronics related stocks will undergo a rise. However, there will be a period of fall during midday. During midweek on 5th December, the value of Heavy industries, Banks, Exports & Gas related stocks will increase. However, companies in the metals, automobiles, mineral & affordable housing  sectors will see a decrease in the value of their stocks and sell them at low rates.

This week holds the birthdays of some of the reputed and talented Indian celebrities. We wish them a prosperous and very grand Happy Birthday, and wish them a great life ahead. Below is a quick list:

Let’s move ahead and read the weekly horoscope for the natives of all zodiac signs:

During the stretch of this week, the transit of the planet Moon will be seen taking place in your tenth, eleventh, twelfth and first house of your sign. Additionally, the planet Mercury will also occupy your.….Read More

For matters related to love and romance, this week is expected to remain ordinary. The transit of the luminary planet, Moon is likely to bring problems in the beginning. Meanwhile…Read More

The first week of December 2019 will begin with the Moon’s  transit in your ninth house. As it moves ahead, Taureans will witness the presence of Moon in the tenth, eleventh and twelfth house….Read More

As the week commences, natives who are in love may encounter some difficulties but the love you have for your partner will keep your relationship intact. You may also plan to take a trip with….Read More

For Gemini natives, the first week of December 2019 will begin with the transit of the luminary planet taking place in the eighth house. Gradually, it will make progress to move into your….Read More

For love affairs, this week is expected to remain advantageous as you can take a major decision with regards to your your relationship with your partner. It is quite possible that you may introduce.…..Read More

At the beginning of this week, the transit of Chandrama will take place in your seventh, eighth, ninth and tenth house. Along with this, the dualistic planet Mercury will also make its transit in…..Read More

For matters related to love and romance, this week will prove to be quite propitious as native in love will witness the inflow of unlimited love and affection. Both you and your partner make a….Read More.

At the beginning of this week, the luminary planet will remain posited in your sixth house. Very soon, the transit of Moon will take place in your seventh, eighth and ninth  house. Additionally.….Read More

For matters related to love and romance, this week will prove to be somewhat ordinary. The aspect of Mercury and Moon will somewhat create fights between the two of you. On the other hand….Read More

At the beginning of this week, the Moon will take position in your fifth house. Afterwards, its transit will slowly take place in your sixth, seventh and eighth house. Along with this, the transit of Mercury.….Read More

For Virgo inhabitants who are in love,  this week will prove to be ordinary. Single natives who wish to propose to their intended should go forward as their love will be reciprocated positively….Read More

Weekly forecast states that this week will remain excellent for matters related to love and romance,  as the significator of love, Venus presence and Mercury’s transit will enhance your love life….Read More

During the initial days of December 2019, the Moon will remain posited in your third house. Gradually, it will proceed to make its transit in your fourth, fifth and sixth house at the end of this week….Read More

Weekly love report states that this time will generate adverse circumstances for Scorpio natives who are in love.  The same has been said because the presence of Mercury and Sun can give birth….Read More

As this week commences the transit of moon the luminary planet will be noticed in your second, third, fourth and fifth house. Along with this, the dualistic planet Mercury will also take residence…Read More

For matters related to love and romance, this week will prove to be better than the previous one. Due to the presence of various malefic planets in your Kundli, you may have to stay away…Read More

For Capricorn natives, matters related to love and romance will prove to be quite propitious, since the planet Mercury transit is taking place and it will bring enhancement to your love life….Read More

For Aquarius natives, the first week of December will begin with the Moon’s transit taking place in your twelfth and then your first second and third house will be occupied by the luminary planet. Additionally, the dualistic planet.….Read More

For matters related to love and romance,  this week is expected to remain ordinary. Thus, your advised to work on your relationship and make the most of this time. The infliction of Jupiter….Read More

At the beginning of this week, Chandrama posited in your eleventh house and it will slowly then move forward to take residence in your twelfth, first and second house. In addition to this…Read More

For natives who are in love, this week will bring some occasional tiffs. Despite everything, your love life will remain successful. You are advised to talk openly to your partner.…Read More