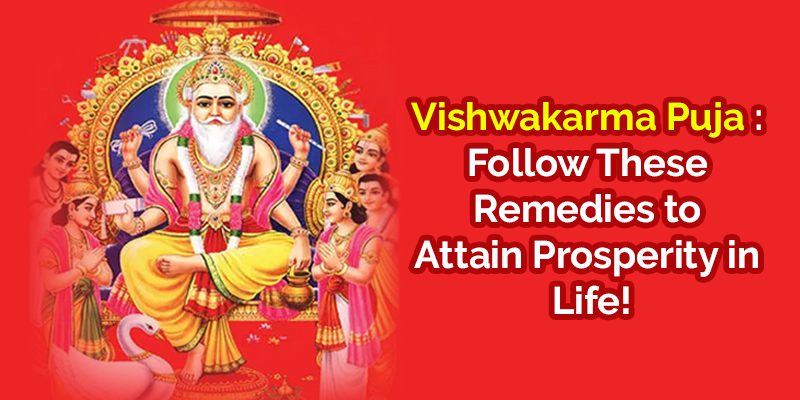 Vishwakarma Jayanti falls twice in a year. Most of the people celebrate this Jayanti on the day of Kanya Sankranti i.e. September 16 or 17  but, in parts of Rajasthan and Gujarat, the birth anniversary of Lord Vishwakarma is celebrated on February 7.

The birthday of Lord Vishwakarma is known by names like Vishwakarma Puja, Vishwakarma Divas or Vishwakarma Jayanti. This day is considered highly auspicious and prosperous for Hindus. There is a belief among people associated with this day that Lord Vishwakarma was born as the seventh child of Lord Brahma, the creator of the universe.

It is believed about Vishwakarma that besides being a great sage, he was an excellent craftsman and had an immense amount of knowledge. There are mentions about him in the Rigveda. It is believed that he constructed the houses, towns, and manufactured weapons, etc. of the gods.

In addition to this, Lord Vishwakarma is also considered to be the constructor of towns like Hastinapur, Dwarkapuri, and created Pushpaka Vimana, Trishul(trident) of Lord Shiva etc. Also, he created Sudarshan Chakra of Lord Vishnu.

The Birth of Lord Vishwakarma

Several legenda stories along with facts, are prevalent pertaining to the birth and place of birth of Lord Vishwakarma. According to one such legend, Dharma was the son of Lord Brahma, whose wife’s name was Vastu. Vastu, who was the ruling deity of craftsmanship, and Vaastu was the seventh son of Vastu. The same Vasudev whose wife’s name was Angiresi and she gave birth to Lord Vishwakarma .

Meanwhile, as per the Skanda Purana, Prabhas, the eighth son of the sage Dharma, was married to Goddess Vadini, the sister of Jupiter. Goddess Vadini was the mother of Vishwakarma.

Besides this, there is a mention in Varaha Purana that Lord Brahma created the thinker named Vishwakarma on the earth for the well being of the people.

Are you looking for a successful and pleasant life? Raj Yoga Report has all answers!

The reverence of Lord Vishwakarma is also performed in shops, factories, offices etc. Also, there is a tradition to worship elephants, the carrier, along with Lord Vishnu and Lord Vishwakarma.

As per a legend, it is said that once Lord Shiva thought of constructing a palace for Maa Parvati and this duty was given to Lord Vishwakarma. Lord Vishwakarma constructed a very beautiful palace of gold with his skills and knowledge.

Lord Shiva invited Ravana for the inauguration of this palace. On seeing the beauty of this palace, Ravana became greedy and after paying his reverence and the Puja, he asked for the same palace from Lord Shiva as a boon. Lord Shiva gave this palace to Ravana and went to Mount Kailash and started living over there. This very palace is what is known as Lanka now.

Hope the above cited information will be helpful to understand the significance of Lord Vishwakarma!

Pleased to have you with AstroSage!