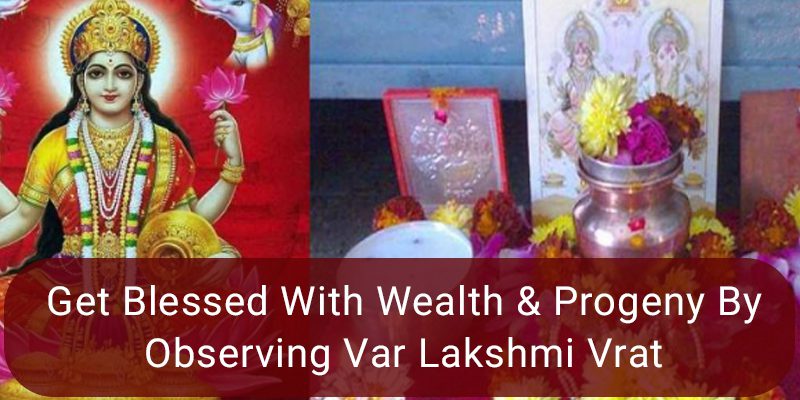 Maa Lakshmi, who is called the Goddess of Wealth and Prosperity in Hinduism, can be venerated by observing a fast dedicated to her named Vara Lakshmi Vrat. Anyone observing this fast attains wealth, progeny etc. and many other wishes.

There is such a belief about this fast that the form of Goddess Varalakshmi grants boons to and fulfils the wishes of her devotees. This is the reason why this form of Goddess is also known as ‘Var’ and ‘Lakshmi’. Know the right way to worship Varalakshmi for an auspicious outcome along with muhurat and legend.

Varalakshmi Vrat is celebrated one week before on the Friday during the Shravan Shukla Paksha. The most special thing about this fast is that whoever observes it with true devotion gets rid of poverty and financial crisis.

This fast associated with Goddess Lakshmi, who is said to be the goddess of wealth and prosperity, is considered to be one of the biggest fasts in Hinduism. This fast is observed on the tenth day of the Shukla Paksha during the month of Shravan. Goddess Vara Lakshmi is a divine form of Mahalakshmi.

It is a matter of ancient times when there lived a woman named Charumati in a village. Charumati was a great devotee of the Goddess. She used to venerate the Goddess on every Friday. Once pleased with the devotion of Charumati, the Goddess appeared in her dreams and narrated the importance of Varalakshami Vrat. Known to be the biggest devotee of Maa, Charumati vowed to observe this fast with full devotion.

Charumati also told her friends about this fast. After this, all of them duly established the Kalash and circumambulated around it. After the fast, all the women revealed their wishes in front of the Goddess, which also got fulfilled. Due to the impact of this fast, all of them attained wealth, fame and progeny. Since then, people started observing this fast. It is said that this fast was also observed by Mata Parvati.

We hope you have liked our article. Thank you for being an important part of AstroSage. Stay tuned for more interesting blogs.