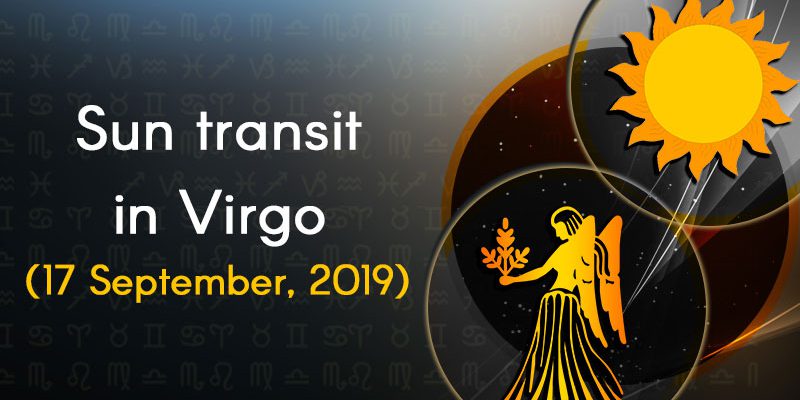 Sun transiting in Virgo today!! The king of all the nine planets will bring these major changes to your life. Read more to get detailed insights about the transit of Sun taking place in Virgo.

Surya Dev has been given the title of direct deity of the world, because the Sun’s rays are responsible for the existence of life on earth and its flourishment. Vedic astrology hails this planet as the father and also the soul of this Universe. On this basis, it can be said that in fact, the Sun has the capability to make an impact on the entire Earth. Under Medini astrology, the Sun is considered the significator of seigniory and the chiefs(leaders) of nations and states are also determined by this planet only. Kritika, Uttaraphalguni, Uttarashada Nakshatras come under its governance. In addition to this, Sunday is considered to be the day of the Sun God. Natives who have Sun related problems in their respective Kundlis are advised to wear Ruby Gemstone . It also strengthens the position of the Sun in the birth chart and helps it to garner positive results. This gemstone creates prospects for one to earn benefits from the government sector and provides increment to the will power of an individual.

Wear Bel Mool to reduce the ill effects of Sun

The Planet Sun’s Impact on a Birth Chart

The ruling lord of the east direction, the planet rides his chariot driven by horses and adorns the responsibility of taking care of the entire Universe. This explains the reason why astrology recommends the analysis of the Lagna positions of the luminary planets, Sun and the Moon, before conducting a study on an individual’s birth chart. Only the strongest of the two luminary planets is taken into account to derive the conclusions. Surya Dev is also the provider of sound health. If this particular planet is ot favourably placed in the Kundli and it is garnering negative results, then it is advised to install Surya Yantra , while observing the proper rituals and then worship it regularly. If the position of the royal planet is favourable in one’s birth chart, then no one can stop an individual from obtaining great heights of prosperity and respect in the society. The transit of Sun in Virgo zodiac sign will prove to be specifically beneficial for natives who are related to the field of writing. They are likely to stumble upon a huge achievement or earn name and fame in the societal stature.

Click Here to Read  : Remedies to Strengthen Sun’s Presence in the Kundli

The king of all the Navagrahas, the planet Sun will move out from its zodiac sign, Leo on Tuesday, September 17, 2019 at 12:43 pm and enter the Virgo sign which comes under the governance of Mercury. It will remain posited in the same zodiac until 18 October 2019, Friday 00:41 pm and affect all the twelve zodiac signs. Let us now move on to know the effects of this transit on the zodiac signs. Additionally, we will also know who will achieve the blessings of the Sun God and who will face his wrath. The transit’s subsequent effects of the country and the entire world have also been mentioned in this blog and are noted below.

Formation of Surya Mangal Yoga to Increase the Nation’s Strength

On 17 September 2019, Surya Dev’s transit from Leo to Virgo will bring favorable results for India. It has been said because the zodiac sign of independent India happens to be Cancer and the planet Sun will move through its third house. Upon reaching the third bhava, the Sun God will get conjuncted with Venus and Mercury. Venus is here in its debilitated sign, but the same sign also happens to be the exalted zodiac sign of Mercury, thereby giving birth to a Neech Bhang Yoga. Due to this situation, India’s glory will be spectated by the whole world and many such schemes will be drawn by the government which will prove to be effective in the interest of the country. The nation will also receive a good amount of support and strength from its neighbouring countries.

Improvement in the Country’s Means of Transportation

Sun Transit to Bring a Boom Period in the Share Market

The Sun’s transit will have a great impact on the stock market and it will be seen undergoing a boom period. This will bring a smile on the face of all the traders and the market will remain sharp. Apart from this, there may be some good announcements made in favour of the Banking sector as well which will increase the possibility of increasing the capital base in public sector banks.

Let us now have a look at the impact of this transit on all the12 zodiac signs.

The planet Sun is the ruling lord of your fifth house, while during its transitory motion, the planet Sun will take nest in the sixth house of your zodiac sign. This house enlightens us about aspects like rivals, will power, survival skills, career, ailments, competitive exams, Bank loans, and maternal family members. This time period will bring forward….Read More

The Sun is the ruling lord of your fourth house. However, it will remain posited in the fifth  house of Taurus natives during its transitory motion. The same house also sheds light on aspects like progeny, education, love relations, intelligence, reasoning abilities, and our interests. As the Sun takes nest in this house, you may have to….Read More

The fourth house of Gemini natives will host the transit of Sun, which is also the significator of luxuries and comforts in one’s life. Additionally, it provides information about one’s mother, expenses, various movable and immovable properties, and vehicle. This transit will create an atmosphere of unrest in your….Read More

Sun will move into the third house of the Cancer natives. The third house is the significator of our siblings and our relationships with them. It also provides information about hard work, interests, and long and short distance journeys. As a result, a favourable time period will be experienced by Cancer natives. You will remain more….Read More

Get Your Free Online Kundali Here

The twelfth house of Virgo natives is ruled by the planet Sun and this transit will occur in your ascendant or first house, i.e., your own sign. This house is quite influential as it is responsible for the formation of one’s identity. It also helps us in inspecting our body, physical features, our image in the society, intellect, stature and health. Sun’s transit in a Moon Sign is often regarded as….Read More

The panet Sun is the ruling lord of the eleventh house of Libra natives and during this transit, it will take nest in your twelfth house. This house is known as the house of expenditure and losses. As a result of this transit, natives born under the zodiac sign of Libra who have been trying for a long duration of time may win an opportunity to…Read More

For Scorpio natives, the planet Sun is the ruling lord of your tenth house. However, during this transit, it will remain posited in your eleventh house. This particular house is the representative of gains and profits in one’s birth chart and Sun’s residency is indicating the possibility of changes which are yet to take place in your life. The eleventh house also provides information about elder siblings, senior officials, ambitions and desires, and sources of income. This transit will bring….Read More

Strengthen The Position Of The Sun In Your Kundali: Install Surya Yantra

The Sun is the ruling lord of your ninth house but the tenth house of your zodiac sign will host the transit of the planet. The tenth house is also known as ‘karma bhava” as it determines one’s profession. The Sun remains powerful in the tenth house because of which you will witness positive results in your professional life. You may also win…Read More

The eighth house of Capricorn natives is being ruled by the planet Sun. During this transit, it will take nest in your ninth house. This house is considered the house of luck and enlightens us about aspects like religious traditions, overseas journeys, pilgrimage, mentor and mentor like personalities, respect, and stature in society. First of all, the impact of this transit will be apparent in your father’s health as he will experience certain medical issues. Tasks which are on the….Read More

Sun will take nest in the eighth  house of Aquarius natives. For these natives, this planet is the ruling lord of the seventh house. The eighth house is considered quite mysterious in the realm of Vedic astrology. It provides knowledge about the impending partnership opportunities, spirituality, hurdles and difficulties of life, unexpected gains and losses, and one’s in-laws. As a result of this transit…Read More

The Sun is the ruling lord of your sixth house. During its transitory motion, it will remain posited in your seventh house. This particular house determines long term relationships and also keeps an eye on your married life. Additionally…..Read More