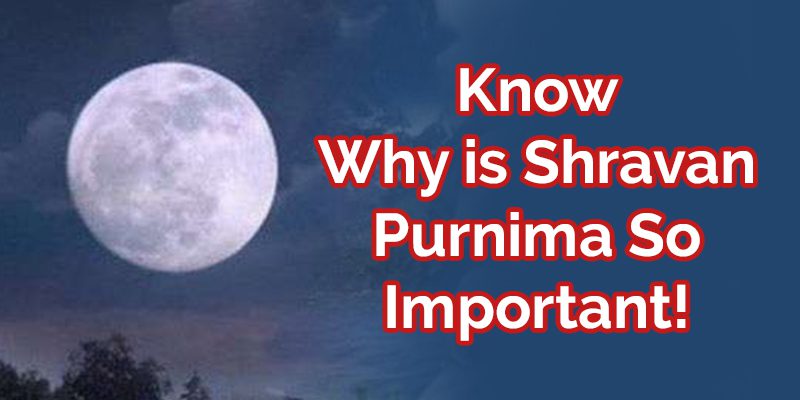 On Monday, the 3rd of August, the Shravan Purnima fast will be observed. This date is considered very auspicious, both religiously and spiritually. Also, the most extensive festival, Rakshabandhan will be celebrated on this day. There is a tradition of worshipping the “Sapta Rishis” on the day of Shravan Purnima. To understand the importance of this day in detail, it is very important to know about the first full Moon day of this month. If you have any questions in your mind regarding this, then you can call up our expert astrologers and Ask a Question.

The Purnima fast is observed every month. The last Tithi of Shukla Paksha every month is called Purnima. The two Pakshas of the month have been determined on the basis of the descending of the phases of the moon. The days during which the size of the Moon decreases, that phase is called Krishna Paksha, while the days where the size of the Moon increases is called Shukla Paksha. The day the moon narrows down to a void completely by decreasing, it is called Amavasya, then on the full moon day, the Moon appears in its full size and the day is called Purnima. Purnima is known by many names like Poornima, Poornamasi, Poonam etc.

Let us know in detail about the importance of Shravan Purnima, Puja Vidhi and other important facts associated with this day.

Shravan Purnima is also special in the Realm of Astrology

According to astrology, the month of Shravan is considered to be quite special, because during its beginning, the Sun changes its zodiac sign. This transit of the Sun affects all the 12 zodiac signs. According to the Hindu Panchang, all the months of the lunar year are named based on the position of the Moon, on the day of Purnima.

There are a total of 27 Nakshatras in astrology. All Nakshatras are considered to be the wives of the Moon, one of which is Shravan. It is believed that on the day of Shravan Purnima, Moon transits into the Shravan Nakshatra. That is why Purnimanth month is named ‘Shravan” and this full Moon is called “Shravan Purnima”.

Shravan Purnima Vrat is celebrated all across the country with different religious beliefs. Even though all the Purnima Tithis are considered to be extremely auspicious, but the day of Shravan Purnima is very important as the holy journey of Amarnath begins on the auspicious day of Ashadha Purnima, and ends on Shravan Purnima.

On this day people offer water to the “Shivalinga”, and the Kawad Yatra gets concluded. At some places, there is also a tradition of performing Yajna, Pujan and Upanayan rites on this day. On Shravan Purnima, donations are also made.

How the Whole Country Celebrates this Day

On the full moon day of Shravan month, worship is performed at different places. But there are some tasks which are common everywhere.

Religious Practices Performed on this day

According to the Puranas, by observing the fast of Shravan Purnima, many good results are obtained. It is believed that if a person does not perform Vedic deeds for the whole year, then by observing this one fast, he/she attains many kinds of virtues. Shravan Poornima Vrat is the only fast, which gives similar results compared to other fasts done throughout the year in total.

There is a reason behind fasting on this  particular day. Let us know the story behind the observance of Shravan Purnima fast.

According to mythological beliefs, there was once a king named Tungadhwaj in a city. One day, he went out hunting in the forest. After a while, he became tired and rested under a Banyan tree. Suddenly, his eyes fell on some people, who were worshiping Lord Satyanarayana. The king was arrogant, due to which he neither joined the Katha of Lord Satyanarayan nor bowed down to God.

After the Puja Katha ended, the villagers requested him to take the Prasad/offering out of respect and courtesy. But the proud king did not accept the Prasad and left. When the king reached his city, he came to know that his kingdom was attacked by the king of another kingdom. The king understood that whatever happened in his kingdom was due to insulting Lord Satyanarayan.

He was ashamed of his mistake and went back to the place where the Banyan tree was located and apologized to the Lord. He asked for the Prasad of Satyanarayana Katha and received it humbly. Lord Satyanarayana forgave King Tungadhwaj and rebuilt his kingdom. With the blessings of God, the King enjoyed “Rajsukh” for a long time and after dying he got salvation.

Hope we have enlightened you with the information given in this article about Shravan Poornima fast.

Heartiest thanks for being involved with AstroSage!