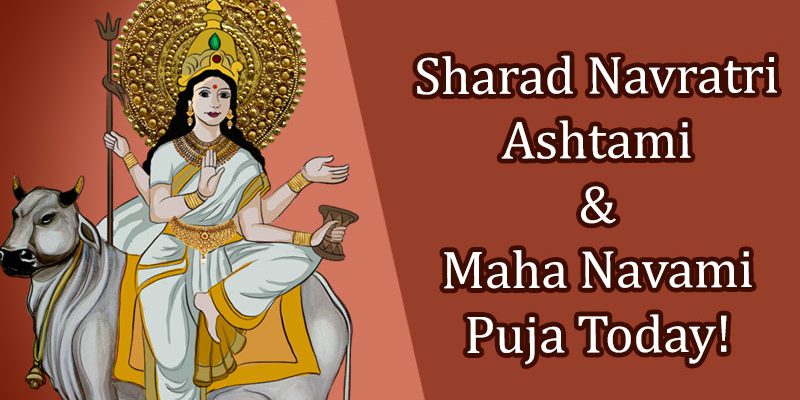 On Ashtami in Navratri, know why Kanya Bhoj and Kumari Puja are held. Read the glory of Maa Mahagauri and Maha Ashtami puja rituals on Durga Puja. also know the importance of Maha Navami Puja.

Ashtami Tithi during Navratri is a significant date in Hinduism. On this day, there is a provision to worship Goddess Durga in her Mahagauri form. Devotees from every community of Hinduism come together and perform Kanya Pujan on Ashtami during Navratri according to traditions. On Ashtami Pujan during Navratri, numerous natives organize different religious rituals and ceremonies such as Tonsure or Mundan, food Tasting or Annaprashan Sanskar and House Warming or Griha Pravesh as per their beliefs and traditions. During Shardiya Navratri in 2019, Ashtami Puja is being conducted today, i.e. on 6 October, Sunday.

Note: It is worth noting that as per Hemadri Nirnayamrit, it is believed that the Ashtami falling on the Shukla Paksha in Mool Nakshatra in the month of Ashwin will be observed as Maha Navami. Therefore, the Maha Navami will be observed today, i.e. on 6 October, Sunday itself. According to Mahanavami scriptures, it holds high significance in the Trilok or Three Worlds.

According to the Hindu Panchang, the Ashtami tithi during Sharad Navratri in the year 2019 will begin from 09:53:11 on October 5 and end on October 6 at 10:56:51. Due to this reason, Ashtami should be observed on 6 October.

Note: This Muhurat is effective for New Delhi. Know for your city: Maha Ashtami Puja Muhurat

As we have already mentioned that Maa Maha Gauri, the eighth incarnation of Maa Bhagwati, is worshipped on the Ashtami during Navratri. The name Maha Gauri is a combination of two words, in which “Maha” means mighty and great, and “Gauri” means fair. Hence, this incarnation of Goddess Durga got her name due to her fair complexion. It is believed that worshipping Maa Mahagauri awakens the Soma Chakra in one’s body, and as a result, the native gets rid of all kinds of troubles in life. With the blessings and grace of the Mother, all sorrows and pain get reduced. Therefore in the scriptures, Mahagauri, the eighth form of Goddess Durga, is also hailed as Aishwarya and Annapurna.

For Peace And Success In Life, Wear This: Gauri Shankar Rudraksha

Maa Mahagauri is widely mentioned in Hinduism, but her existence holds major importance in Vedic Astrology as well. According to astrology, Mother Mahagauri dominates and rules over the Rahu planet. This is why it is said that any native worshipping Goddess Mahagauri attains her blessings and gets rid of all the Doshas and malefic effects formed by Rahu from the kundli.

The Glory & Form of Maa Mahagauri

You will get to read the description of the beautiful form of Mahagauri in several Hindu scriptures. According to beliefs, it is said that Goddess Parvati had performed severe penance for years to attain Lord Shiva as her husband. As a result, her body turned black, after which Lord Shiva appeared before her and bathed her with Gangajal. Since then, the complexion or colour of the Goddess became clear and fair, which earned her the name Maha Gauri.

Navratri, along with the Navami of Shardiya Navratri, will end tomorrow, i.e. October 7. On Navami, special prayers are offered to Goddess Durga in the Hindu households and big Pandals and processions are organized all over the country. During this period, Maa Siddhidatri, the ninth form of Goddess Durga, is worshiped. On this occasion, Bhandara and Kanya Pujan are organized in different places. So let us now know the importance of Navami Tithi during Navratri, and Paran and Durga Visarjan Muhurat.

Note: This Muhurat is effective for New Delhi. Know for your city: Paran Muhurat and Durga Visarjan

Navmi Pujan during Sharad Navratri will be performed tomorrow, i.e. on 7th October 2019, and all auspicious activities will be carried out as per the auspicious Muhurat.

Hindu scriptures describes that performing Parana on the Dashmi or tenth tithi during Sharad Navratri is auspicious. The ritual of fasting for nine days during Navratri is concluded during the Paran Muhurat. It is said that only after Navratri Parana is performed, the devotees can offer fruits, gifts, clothes, donations and Dakshina etc. to the Brahmins and seek their blessings. Along with this, Kanya Pujan is also organized.

Get details about Daily Festivals and Panchang

The ninth and final form of Maa Durga is Maa Siddhidatri, which literally means the “Goddess of Accomplishment”. Just like her name, this divine form of Goddess Durga grants all kinds of Siddhis and achievements to her devotees. That is why it has been said that if a native worships this form of the Goddess with full devotion, then the Goddess fulfils all his/her wishes and desires. Along with this, anyone who gains the grace of the Goddess achieves Salvation or Moksha.

According to the Panchang, there is a provision to perform Durga Maha Navami Puja on the Navami tithi of Sharad Navratri. During this occasion, special Havan is organized and offerings are made for all the Hindu deities.

Maa Siddhidatri In Her Form

Mantras To Chant On Navmi During Navratri

Kanya Pujan or Kumari Pujan is performed on the Ashtami and Navami tithi during Navratri. On this day, every Hindu family devotedly worship the Kanyas or young girls. For this, girls aged 2-10 years are invited to the houses, venerated and offered the Bhoga and Dakshina. Let’s know the benefits of Kanya Pujan and mantras to chant:

As per Hindu beliefs, these young girls represent nine incarnations of Goddess Durga. Worshipping them as per the auspicious muhurat pleases the Goddess and offers fruitful results. On Ashtami and Navami during Navratri, Kanya Pujan is performed as per the traditions and rituals, but scriptures describe the importance of performing Kanya Pujan on Ashtami itself. Here are the rituals:

(Note: If it is not possible to worship nine girls, then there is a provision to worship two girls.)

AstroSage wishes all readers a Happy Maha Ashtami 2019! We hope that Goddess Durga’s blessings are always with you.