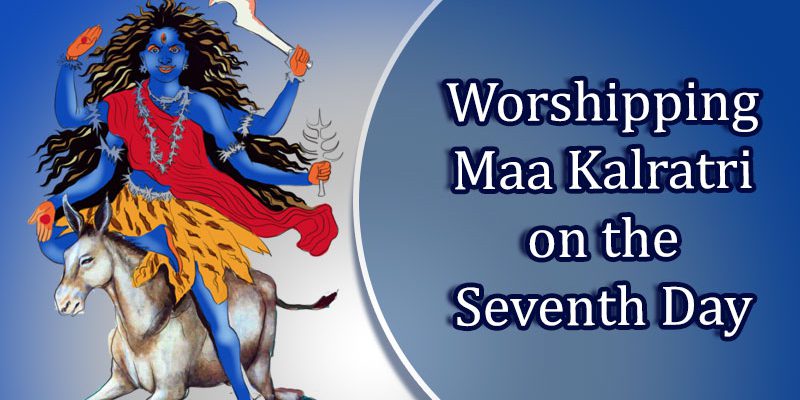 Worshipping Maa Kalratri on the seventh day of Navratri blesses the devotees! Also know the importance of the first day of Durga Puja and rituals!

In 2019 on 5 October, i.e. tomorrow, the seventh day or Saptami of Navratri will be observed with zeal and enthusiasm. On this occasion, a massive influx of devotees can already be seen at the temples and Shakti Peethas across the country. The seventh day of Sharad Navratri holds extreme importance. This day is considered as the first day of Maha Saptami Durga Puja festival mainly in West Bengal, Odisha, Bihar and Assam. In such a situation, the importance of this date increases.

Venerating Maa Kalratri On The Seventh Day Of Navratri

As we all know, Goddess Durga and her nine incarnations are duly worshipped throughout the Sharad Navratri. Out of these nine forms, Maa Kalratri is worshipped on the seventh day. The Kalratri form of the Goddess is also called as Shubankari Devi. Just like her name “Kal”, this form of Goddess Durga is equally fierce and fearful, which is why she is known as the Destroyer of Sinners. It is believed that anyone who gains the blessings of the Goddess gets rid of all the negatives and obstacles in life.

Maa Kalratri in her Form

Read in Detail: Glory of Maa Kalratri and Mythological Legend

Worshipping Maa Kalratri as per the rituals with devotion helps to get rid of negative energies and attain success. The puja rituals for the seventh day is the same as others, but Tantra Puja scholars and pundits, this puja should be done as per the guidelines: –

Get Details About Festivals, Rituals and Mantras

Importance Of Seventh Day in Navratri

The seventh day of Navratri is the most auspicious to appease Goddess Kalratri, one of the forms of Maa Durga. Apart from the devotees, this day is also considered very important for the Yogis and Spiritual Seekers for the attainment of the Siddhi. According to the beliefs, this is the day when a person can atone for his sins and achieve the Sahasrara Chakra in Kaliyuga. Therefore, every puja performed on this day incurs substantial results. Maa Kalratri, despite in horrific and fearful form, remains kind and gentle towards her devotees. In her Kal form, she saves her devotees from any evil and sinners. Hereby, any devotee who worships her with true devotion gets his/her wishes fulfilled.

Durga Puja during Sharad Navratri is celebrated with great fervour, especially in West Bengal, Assam, Odisha and some other states including Bihar. This festival commences with Ghatasthapana on the sixth day of Navratri, and the first day of Maha Saptami Durga Puja festival is celebrated on the seventh day of Navratri. On this occasion, Navpatrika Puja is carried out on the first day of Durga festival, also known as Kalabau Puja. in this ceremony, nine types of leaves are mixed together to worship Maa Durga, with every leaf symbolizing an incarnation of the Goddess.

Note: The time mentioned in the above table is effective for New Delhi. Click here to know for your city: Nabapatrika Puja Rituals & Muhurat

Happy Navratri & Durga Puja to all the readers from AstroSage!