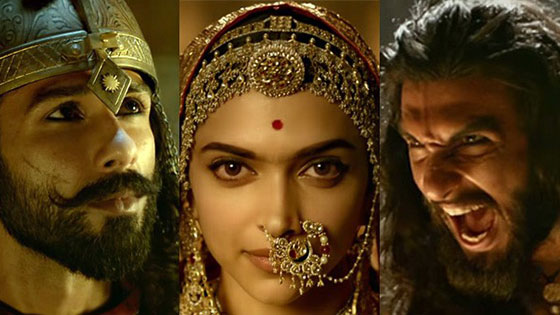 Sanjay Leela Bhansali‘s magnum opus Padmavati was scheduled to release on December 1, 2017. However, protests against the movie broke out all across the country and producers of this docudrama had to postpone the release date. The controversial movie drew a lot of ire from different groups such as Karni Sena, who claimed that the distorted version of history is being perpetrated in this Bollywood film.

According to the news, name of the movie has been changed to pacify certain groups. Also, sensor board has asked for several cuts in it. NDTV reports:

Sanjay Leela Bhansali’s film ‘Padmavati’, which has been at the centre of a huge controversy, will get a U/A certificate from the Central Board of Film Certification. The board has suggested 26 cuts to the film and a change in the title to ‘Padmavat’ – and will issue the certificate once the required and agreed modifications are made, news agency ANI reported, quoting the censor board.

One of the lead actors of this movie, Shahid Kapoor had earlier said that the date would be decided till the end of 2017. However, it did not happen and people are still waiting for movie’s new release date. Times of India had cited Shahid Kapoor earlier:

When asked about the project’s current status, PTI reported that Shahid said, “I am sure we will have clarity by the end of this year about when the film is releasing. But we want it to release as soon as possible.”

Let’s now take a look at what Numerology says about Padmavit’s release date.

Natives with numerology number 6 will put a lot more efforts to get the fruitful results. However, things may happen gradually but they might be blessed with good luck. They will experience both good and bad as well and this will teach you new lessons of life making them a better person. Some good opportunities will come their way but only hard work is not enough but smart work is also needed.

The numerology predictions clearly indicate that releasing Deepika Padukone, Shahid Kapoor, and Ranveer Singh starrer Padmavati is not going to be a cakewalk for Bhansali. He will have to convince a lot of people in order to get a green signal for his movie. Now, the question is: when will Padmavati release?

The first month of 2018 in January. The number 1 (the first month) and number 6 (Bhansali’s numerology number) are enemy to each other. Whereas number 2 (February, the second month) is neutral to number 6. If we consider the month of March too, number 3 is again is not friendly with number 6. Hence, there are strong possibilities that Padmavati may be released in February, 2018. As the effect of changing effects precedes the change, therefore it may also release toward the end of January.

Taking all possibilities into accounts, we may conclude that the strongest chances of Padmavati’s release are from second half of January to February, 2018. Once released, we will be back with astrology prediction of how Padmavat performs over box office.

If you want your name to attract success and luck in your life, order now: Name Correction report.