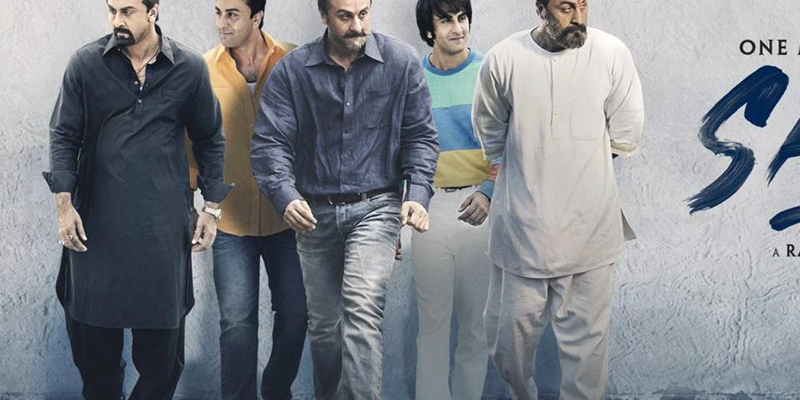 Ranbir Kapoor starrer ‘Sanju’ is one of the much-awaited films to be releasing this year. His uncanny appearance, mind-blowing trailer, and all the curiosity about the plot are pumping the excitement among the audience. And the trailer just took the excitement to an altogether new level.

The movie, Sanju is the creation of well-acclaimed director that revolves around the controversial life of tragic hero Sanjay Dutt. We’ve known Sanjay Dutt as the great Khalnayak, but his real life has always made headlines every now and then.

Rajkumar Hirani’s pictorial task was to carve out the best of his life on the reel screen. For the dream project, he chose the heart-throb sensation Ranbir Kapoor. From showcasing the same appearance to finally portraying a true picture of Sanju baba, Ranbir Kapoor seems to have mastered it all.

Dive into the Star Cast of Sanju

A Dose of Entertainment, Drama, and Tragedy

The trailer begins on a cheerful note with Sanjay Dutt (Ranbir Kapoor) waving when moving out of the prison bars and playing the air guitar. However, it gets entangled with dark glimpses of the actor’s struggle with the criminal cases, personal relationships and media conflicts. It gets particularly depressing as we see him broken, depressed and being accused of terrorism. The most interesting scenes include Sonam Kapoor playing Tina Munim and Anushka Sharma’s blue-eyed appearance and the first look at the characters played by Dia Mirza, Manisha Koirala, Vicky Kaushal and  Jim Sarbh.

A Sneak Peak Into the Real Life of Sanjay Dutt

There is no doubt that infamous brat Sanjay Dutt has got immense love in his Bollywood career. However, his personal life has always been overshadowed by mystery. From a die-hard fan following to finally having connection with the underworld, Sanjay Dutt faced it all.

Let’s analyze the movie astrologically and discuss the movie prospects on the box office.

Sanju is releasing on 29th June 2018. As per the Hindu Calendar,  this day can be interpreted as Krishna Pratipada. It is the name for Nanda tithi and is believed to attract happiness. Nanda tithi is considered very auspicious to initiate an important work. Hence, the tithi refers to the success of the upcoming movie, Sanju.

The day (29th June 2018) comes under Purva Ashadha Nakshatra is ruled by Venus, the planet of love, romance and glamour. This nakshatra is known to be cruel and favorable for the acts of fighting, actions related to destruction, ill repute, and conflicts. The movie is based on the life of Sanjay Dutt is full of fighting sequences, personal conflicts and questions the bad reputation.

The name of yoga “ Indra” itself explains everything related to the progress of the movie. Indra is an auspicious yoga and surely beneficial for new ventures.

The movie will present Ranbir Kapoor in a very different role. He will be able to showcase his latent talent. The viewers will appreciate his ability to handle such a different & difficult role in a very lucid manner.

Sanju Will Win Your Hearts

Tarabalam : The movie SANJU is primarily Ranbir Kapoor’s movie. The Nakshatra ruled by Ranbir Kapoor is friendly with the nakshatra on the date of the movie release. This indicates happiness for Ranbir.

The Nakshatra of the director Rajkumar Hirani is Janma tara viz a viz the Nakshatra P.Ashadha, which will cause anxiety and worries to him. For the producer, Vidhu Vinod Chopra, who has financial stakes, Kshema tara will ensure cash inflow for him and brings him abundant wealth.The film will have a good opening at the box office & will earn immense amount of money.

What Numerology Says for Sanju

Let’s analyze the movie review numerologically. The numerological value of the the film Sanju comes to 16. As per Vedic Astrology, this number matches well with the birth dates of Ranbir Kapoor, Sanjay Dutt and Rajkumar Hirani. Surely the masses are going to accept the movie.

The releasing date of the movie is 29-6-2018. The date 29 is ruled by Moon. As per Vedic Astrology, Moon is the symbol of emotions and art. Viewers will like the emotional quotient of the film. The emotions will flow in sympathy towards Sanjay Dutt. Astro-Numero Verdict will not disappoint the critics, viewers and the producer of the film.

The destiny number of 29-6-2018 is 1. The number 1 is in perfect harmony with the birth details of the hero Ranbir Kapoor, Sanjay Dutt, Vidhu Vinod Chopra, and the director of the movie, Rajkumar Hirani. All the best to the entire cast of SANJU!