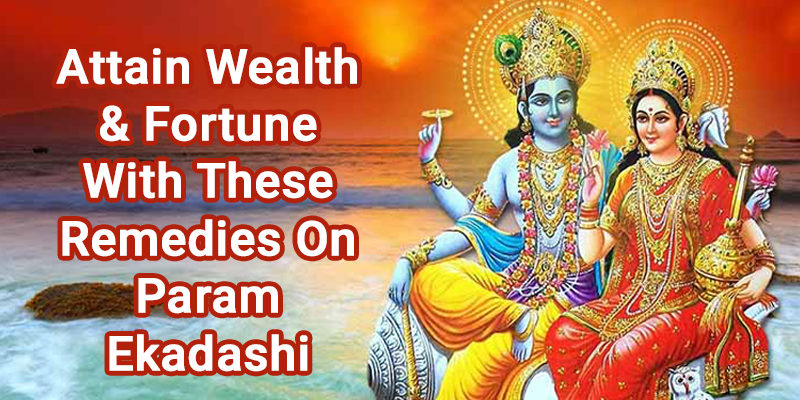 Param Ekadashi is also known as Purushottam Ekadashi at some places and is celebrated on Ekadashi Tithi of Shukla Paksha during Adhik Maas. We have already informed you that twenty-four Ekadashis fall every year. But the number of Ekadashi in Malmas increases from 24 to 26. This year, Param Ekadashi will be celebrated on October 13, 2020 i.e. Tuesday.

Let us know about the legend of Param Ekadashi Vrat, Pujan Vidhi and associated significance.

First of all, let us talk about the Shubh Muhurat of Parma Ekadashi.

The above timings are applicable for Delhi only. Click to know the Shubh Muhurat of your city.

Like all other Ekadashis, Param Ekadashi is also dedicated to Lord Vishnu. It is believed that one is blessed with rare powers by observing fast and performing worshipping rituals on this day. Since this Ekadashi is considered to be the bestower of rare powers and hence, it is known as Param Ekadashi.

It is extremely important to know appropriate rituals to complete the worship. Let us now try to understand the exact Pujan Vidhi of Parma Ekadashi.

Infact, the fast of every Ekadashi falling in a year is observed for prosperity and attaining salvation (Moksha) but observing fast during Adhik Maas and performing donation has special importance. It is because Lord Purushottam showers special blessings in this month. It is believed about Param Ekadashi worship/fast that whosoever is facing financial difficulties or wishes for salvation after death, must observe this fast.

Although, the day of Ekadashi is dedicated to Lord Vishnu, if you worship Mata Tulsi along with him on the same day, then all your financial troubles will fade away.

Must Recite the Following Mantras During the Worship of Param Ekadashi

There lived a Brahmin named Sumedha in the city of Kampilya with his wife, Pavitra. Both husband and wife were very sincere and religious. They would greet their guests with whatever they had, but felt sad due to poverty. One day, Sumedha told his wife that he wanted to go to a foreign land to earn money.

Then, the wife of Sumedha said that they worshipped god, helped people and never thought  ill of  anyone, but still if they were living a poor life, then there must be a will of god behind it. Further, maybe it was a result of their previous life deeds and therefore she advised him not to go anywhere. After hearing his wife, Sumedha relinquished the idea to go anywhere.

One day, the Rishi named Kaundilya was passing through that city and to take some rest, he stayed with a brahmin couple. The Brahmin couple paid impeccable respect to the sage (Rishi). Later, Sumedha asked the sage about the remedy to remove poverty. Then, the sage advised them to observe the fast and worship Lord Vishnu on Param Ekadashi of Krishna Paksha during Malmas with due rituals. After this, both observed the fast as advised and hence, their days changed altogether. Not only that, they were also blessed with birth in Vishnu Lok after death.

On another note, we would also like the readers to know that we will be coming up with the IPL match predictions regularly. Click to get the Predictions for today’s match.

Thank you for associating with Astrosage!