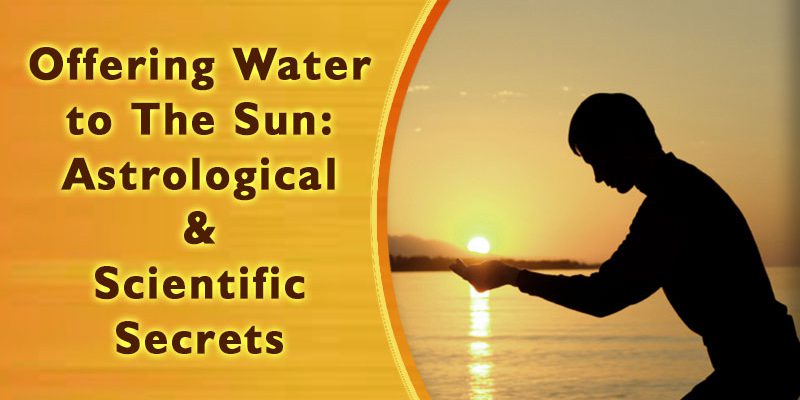 The entire universe derives its energy from the Sun. It is considered the father of all stars in the galaxy. This explains the utmost status it has attained in the realm of Hinduism and Vedic Astrology too. Prayers are offered to the Sun in various manners to get rid of various doshas present in one’s life. Offering Arhgya or water to the Sun is one such practice which brings extraordinary results to the lives of various people residing in this planet.

Why Is Arghya Offered To Sun?

An individual’s day starts on a great note if he/she offers arghya or water to the Sun during sunrise. In the ancient times, people used to offer Arghya while taking baths in a pond or a river. However, urbanisation has taken over this practice. People now prefer to take baths in their lavish and comfortable bathrooms. But offering arghya has its own importance as it provides radiance to one’s soul and mind. Luck never leaves one’s side if this ritual is practiced on a regular basis. Let us read the astrological and scientific significance of offering arghya to the Sun.

Astrological Significance Of Offering Arghya To The Sun

The planet Sun is hailed for its fearless and bold nature. Hence, by offering it water, one acquires these virtues present in the Sun. One also strengthen the position of Sun in his/her Kundali by performing this ritual daily. Offering water to the Sun in the morning also reduces the malefic effects of Saturn in one’s life. The affliction of Saturn gets stabilized naturally when one incorporates the virtue of punctuality.  If it is practiced during the dasha of the Sun, the destructive repercussions come to an end. Moon is determined by the element of water and as the natives offer water to the Sun, all the auspicious Yogas formed by these two planets get activated in their respective Kundalis.

Scientific Significance Of Offering Arghya To The Sun

Each and every drop of water offered to the Sun function as a medium through which sun rays passes into one’s body. On reaching one’s body, the sunlight dissolves to form seven different colours. These seven colours represent the seven chakras present in a human being’s body and provides protection from various bacteria residing in our environment. One’s eyesight improves as a result of this practice. Arghya is offered mostly during the morning time. As a result of practicing this ritual daily, one’s bones become strong because the morning sunlight is considered the best form of energy to boost one’s health.

Important Facts To Keep In Mind While Offering Arghya

We hope that this article on the importance of offering Arghya to Sun will prove to be beneficial for you. We wish you all the best.