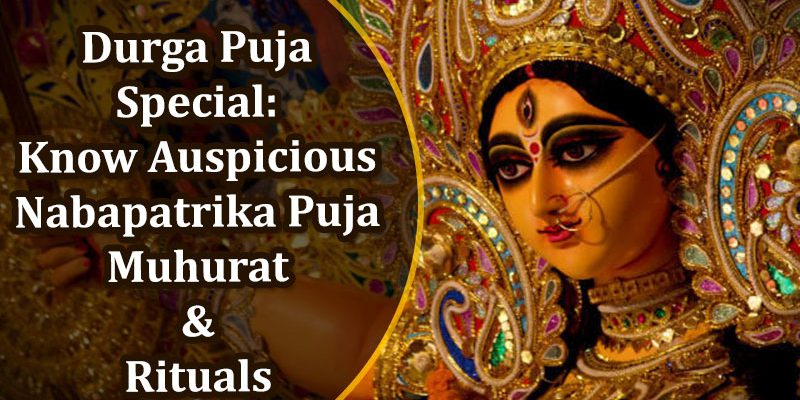 Nabapatrika Puja during Durga Puja will procure desired results! Read the mythological significance and puja rituals to be followed.

Nabapatrika Puja marks the initiation of the first day of Durga Puja and is also known as Maha Saptami. It is derived from two words, “Nab” + “Patrika”, which translates to NIne Plants. It is popularly performed by farmers who wish to be blessed by the Goddess Navpatrika with a lavish and yielding harvest. Know the auspicious muhurat, puja rituals, significance of Nabapatrika Puja during Durga Puja and which nine planets are worshipped under this ritual.

Note: This time duration is applicable for New Delhi. Click here to know yours.

Navpatrika Puja, famously known as Kolabou Puja, is a prominent festival observed in the states of Assam, West Bengal and Orissa. Nine different kinds of plants, which are believed to be different manifestations of Goddess Durga, are used to carry out the worship the Goddess herself on this day. Nabapatrika is a bundle of nine leaves from nine sacred plants bundled together. Below is a quick list of those plants along with the name of the incarnations they signify.

Tie or wrap up the nine leaves, a symbol of human life, altogether in a red or white sari and bathe it with Gangajal or in a sacred river body. Then install it on a wooden platform on the day of Maha Saptami on the right side of the idol or picture of Maa Durga. Offer unhusked rice to it, as it naturally represents Maa Laxmi.

In mythology, the significance of Navpatrika Puja is also mentioned. It is believed that Kolabou, also known as Navapatrika, was the wife of Lord Ganesha and the biggest devotee of Goddess Durga. She used to venerate the divine goddess using nine different forms of plants’ leaves during Durga Puja. Hence, from that day onwards, this ritual was being followed by the masses, and to this day, its significance is unparalleled.