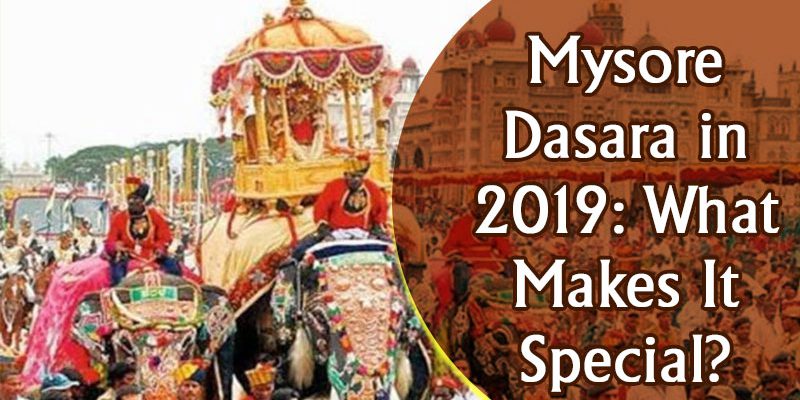 Mysore Dasara celebrates the triumph of good over evil! Know its date in 2019, and what is the mythological significance behind carrying out Shobha Yatra on this day.

Mysore, a city located in Karnataka, is a very famous tourist attraction, and celebrations on the Mysore Dasara or Dussehra has attained worldwide recognition. From all over the world, people visit this city to witness the grand festivity. Along with its religious aspect, you also get a glimpse of the royal traditions enriched within the city of Mysore. Mysore Palace, which is the main attraction of this city; is beautifully decorated on the day of Dasara. Along with this, Shobha Yatra and other cultural programs are organized.

When is Dasara Celebrated?

The festival of Dasara in Mysore is observed during Shardiya Navratri. It begins on the first day of Navratri and lasts for ten days. According to the Hindu Panchang, Dasara is celebrated on the Dashami Tithi of Shukla Paksha in the month of Ashwin. Dashami Tithi marks the last day of this festival, which is also famously known as Vijayadashami. In the year 2019, this festival is occurring on 8 October. Tourists from all over the world take part in this festival.

According to Hindu beliefs, the festival of Dasara conveys the victory of good over evil. According to the legend, on this day, Goddess Durga killed the demon Mahishasura. Along with this, Lord Shri Rama killed Ravana on the day of Vijayadashami. This is the mythological significance behind celebrating Dasara, which is preached across the country through stage shows and plays at the time of Dasara or Dussehra.

Witnessing Royalty of Mysore During Dasara

Exploring the history, it seems that Mysore Dasara was first organized in 1610. However, it was first observed in the 15th century in Vijayanagar, a powerful empire of South India. The festival of Dasara played an important role in framing the history of Vijayanagar Empire. Many historians believe that the festival of Mysore Dasara was one of the most prominent ones.

It is believed that the city of Mysore was named after Mahishasura. According to the mythological legend, it is said that Mahishasur’s father was the chief of the Asuras or Demons, who fell in love with a buffalo living in water and later married her. In this manner, Mahishasur was born. Mahishasur was blessed with different types of deceptive powers, with the help of which he would take the form of a buffalo or a human being. Mahishasura was slaughtered by none other than Maa Durga.

The Mysore Palace becomes the centre of attraction on the day of Dasara. It is decorated in a grand manner. Adorned with approx. 1 lakh colorful lights, the palace attracts the crowd in a large volume. Gaining a bird’s eye view of the palace captivates the mind of the viewer. Be a part of Mysore Dasara to witness such grandeur.

The Shobha Yatra during Mysore Dasara is organized in a grand manner. In this procession, you can witness various cultural scenes and displays. Millions from India and overseas come to this city to spectate such beautiful envisions.  According to the local language, this Yatra or procession is known as Jambu Sawaari. In this, well-adorned idols of Maa Durga are established on a golden pavilion or Mandap placed over elephants. This Yatra is carried out with music bands, dancers and much more.

The exhibitions organized during Mysore Dasara has gained popularity since its initiation. Historians believe that the exhibition during Mysore Dasara was first started by Maharaja Chamaraja Wadiyar of Mysore in 1880. This exhibition comprises of several things to entice tourists. A cultural program is also organized within the exhibition. Hence, this is why this festival holds high significance. If you really want to feel the magnificence of the world famous Dasara festival taking place in Mysore, then you must visit the city and become a part of the event.

We wish all the natives a very happy Mysore Dasara! Visit Mysore to witness the grandeur and be a part of the festivity!