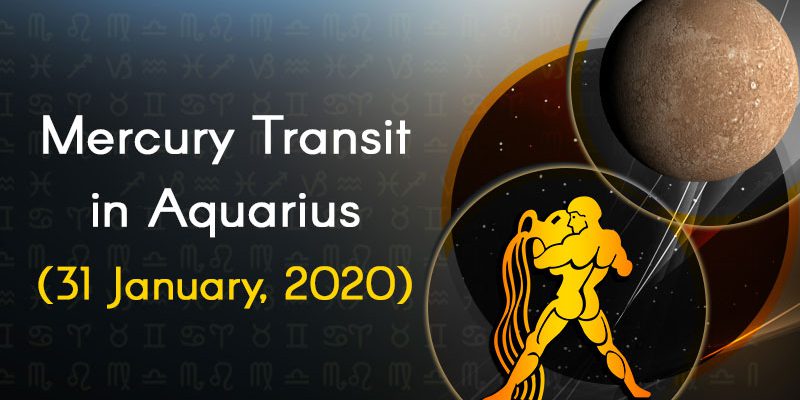 Mercury Transit in Aquarius to bring these Changes in your life. Read more to find out now!!

According to Vedic astrology, the planet Mercury is considered to be the significator of intelligence, thoughts, communication and speech. Mercury, who is the ruling lord of Gemini and Virgo zodiac signs, is given quite an important status in the realm of Vedic astrology. It is believed that a native who remains under the endowment of Mercury possesses great intellectual prowess, his/her argumentative skills become noteworthy and the concerned personality also manages to leave behind a good impression on account of his/her communication skills.

The dualistic planet Mercury remains exalted in the zodiac sign Virgo and Pisces happens to be its debilitated zodiac sign. Apart from this, the same planet is also given a neutral status in the domain of astrology. Hence, it procures negative results when it comes into contact with a malefic planet. On the contrary, positive results come into the forefront when Mercury remains posited with a beneficial planet.

Mercury maintains a friendly relation with Sun, Venus and Rahu. At the same time, it considers the planet Moon to be its enemy. Apart from this, Saturn, Mars, Jupiter and Ketu happen to be the planets with whom Mercury maintains a neutral relationship. As per the mythological facts and legends, Mercury is considered to be the child of Chadrama (Moon) and Jupiter’s wife, Tara. Now, this explains why some traits of Moon and Jupiter are seen in the planet Mercury. Moreover, when it comes to wisdom, speech, education, teaching, Mathematics, logic, Mechanics, Astrology, Accountancy, Ayurveda, writing, publishing, Theater, and personal business, Mercury is considered to be their governing factor.

Not only this, Mercury is considered to be the representative of organs like brain, tongue, nervous system, glands, skin, neck etc. If Mercury is negatively placed in a native’s birth chart, then it causes problems such as loss of ability to remember things, headaches, skin diseases etc. This dualistic planet is the ruling lord of North direction and 3 out of 27 Nakshatra, which includes Ashlesha, Jyestha and Revati Nakshatras. The change of residence of the planet Mercury pictures results according to its position in the various houses of the native’s birth chart or Kundli.

The impending impacts of mercury’s transit in Aquarius and its specific effect on your zodiac sign are mentioned below in this blog which includes the sign wise predictions for this transit.

The planet Mercury will enter the zodiac sign  Aquarius  on Friday, January 31, 2020 at 2:44 AM (after midnight on January 30) after moving out from Capricorn, which is governed by its friend Saturn.

Let us now finally move on to the predictions.

Mercury is the Lord of third and sixth houses for Aries natives, and during its transit into Aquarius, the planet will remain posited in their eleventh house, which is the house of profits. This house signifies your….Read More

Mercury, the dear friend of the Lord of your sign Venus, is making its transit through the tenth house of your sign, which signifies your Karma and business. For Taurus natives, the former is the….Read More

Mercury is the Lord of the zodiac sign Gemini, which makes it very significant for these natives. Additionally, it is also the Lord of your fourth house, and with this transit in Aquarius, it will be posited in your ninth house, which is the house of….Read More

Mercury is the Lord of third and twelfth houses for Cancer natives, and during its transit into Aquarius, the planet will remain posited in their eighth house, which indicates ups and downs in life. Mercury is the only….Read More

Mercury is the Lord of the second and eleventh houses for Leo natives. Both these houses signify wealth, which is why this Mercury transit is going to hold a special significance…..Read More

Mercury is the Lord of the zodiac sign Virgo, and also has Lordship over their tenth house. Therefore, your body as well as your Karma, both are influenced by Lord Buddha. This means that the transit will….Read More

Mercury is the Lord of eighth and eleventh houses for Scorpio natives, and during its transit into Aquarius, the planet will remain posited in their fourth house. This house signifies your overall….Read More

Mercury is the Lord of the seventh house for Sagittarius natives, and also has Lordship over their tenth house of Karma. With this transit, it will get posited in your third house, which belongs to….Read More

This Mercury transit in Aquarius will prove to be quite significant for Capricorn natives because not only is this planet, Lord of your sixth house but your house of fortune as well. During this transit period, it will be posited in your…. Read More

This Mercury transit in Aquarius is a major event for you because it is taking place in your own sign. Mercury is the Lord of your fifth and eighth houses, and during the transit period, it will be posited in your first or ascendant house. This is forming a Raj…..Read More

For Pisces natives, Mercury is the Lord of your fourth house, that is the house of happiness, and the seventh house of partnerships. With this transit in Aquarius, it will be getting posited in your twelfth house of losses and….Read More