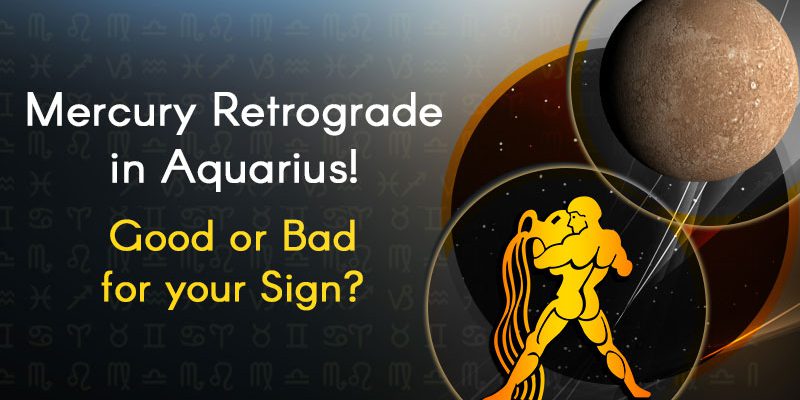 Find out what Mercury Retrograde in Aquarius has in store for your zodiac sign.

The transit of retrograde Mercury happens to be an important celestial event as the concerned planet’s capacity to propagate results become more proficient, and it starts to produce instant effects. In such a situation, the speech and communicative abilities of certain natives undergo changes and some others become worthy of receiving an optimum amount of profits. When Mercury transits in a retrograde motion, positive results also come into the forefront with regards to business. At the same time, some others fall prey to circumstances. Considering all of these developments, it can be said that Mercury in a retrograde motion brings specialized changes for each and every arena of life, which is why this cosmic activity is given a very relevant status.

Speaking about this particular transit, then on 17 February 2020, at 5:33 AM in the morning, Mercury will retrograde in Aquarius zodiac sign and remain in the same position until 10 March 2020, at 8:42 AM in the morning. Afterwards, it will get back to moving in a direct motion.

Get  Detailed Personalized Predictions and Bring Positive Changes to your Life!!

Usually it is believed that any planet in a retrograde motion begets negative outcomes, but is nothing but a myth. If the planet Mercury is residing in a favourable place in your zodiac sign, then it will definitely generate favourable outcomes, regardless of its transit motion.

If the dualistic planet Mercury is residing in a retrograde motion in your Kundli too, then its retrograde motion will definitely beget you positive results. Under its influence, your concentration and memorisation skills will improve drastically. Its special influence can also activate your sixth house and you can even get a premonition about the events yet to take place in your life.

A retrograde Mercury empowers you with deep logical ability as well as the capacity to understand and think deeply and you can also develop an intense inclination towards learning new things and education in general.

Considering all of these situations, Mercury transit in a retrograde motion will pave the way for profits for various natives, while some others may have to remain inflicted with several problems.

For natives belonging to the zodiac sign Aries, Mercury retrograde will move into your eleventh house. In such a situation, you will come into terms with unlimited profits and your sources of income will also increase. You will be provided with multiple and new equipment, which will make fulfilling contributions to your economic status.

For Cancerians, the transit of Mercury retrograde will take place in your eighth house. Under the influence of this planetary movement, you will be provided sudden economic profits from lottery or betting. Good results will also come forth if you have made investments in the share market.

Mercury retrograde will move into the seventh house of Leo natives, because of which you will gain unprecedented profits in your trade ventures. Relations with your life partner will also improve.

For Libra natives, Mercury will retrograde in your fifth house, because of which you will earn maximum profits on the academic front. A new achievement is also on the cards. You will get to learn many new things and also take interest in chanting Rosary.

For Scorpions, Mercury will retrograde in your fourth house, because of which you will come into terms with multifaceted comforts and luxuries. Suddenly, you will be graced with a promotion offer. Your peers will also come forward to help you.

Mercury retrograde will take place in the second house of Capricorn natives because of which you will talk in a very calculative manner. Certain philosophical traits will be seen in your behaviour and you will make economic gains in a very commendable manner. Not only this, you will also be able to save a successful amount of wealth.

For Aquarians, Mercury retrograde will take place in your ascendant house, because of which your mental abilities will increase to a great extent. You will find it quite easy to make decisions on your own. But, you should refrain from doing any tasks in a haste and take special care of your health.

Mercury in retrograde motion will move into the tenth house of Taurus natives. In such a situation, you should pay special attention towards your professional front. Clashes may  take place between a coworker and you. Also, you should work with extreme diligence to prove your worth at the office.

For Gemini natives, Mercury retrograde will move into your ninth house. In this transit duration, you should make amendments to improve your relations with your father and mentor like personalities. Only this will help you to earn name and fame in society.

Mercury retrograde Will move into the sixth of Virgo natives. The concerned planet is also the ruling Lord of this particular zodiac sign. Under the influence of this transit, you may get into some unnecessary and unwanted debates with people which will be responsible for economic losses. You will remain irritated all throughout this while and may also be inflicted with numerous health problems.

For Sagittarius natives, the third house of your sign will be occupied by Mercury in a retrograde motion. Because of this, you will break all limits of your courage and undertake certain activities which would pave the way for losses, economic ones  to be precise. Success will come to your way only after hard work. Miscommunication may also make you see the face of losses.

For the last sign of the zodiac circle Pisces, Mercury retrograde will take place in your twelfth house. In such a situation, you will take a commendable interest in religious activities. But at the same time your expenses will increase to a great extent. Health problems may also crop up. In such a situation, take good care of your well being and keep a tab on your expenses as well as your economic condition.

As we have already known by now, Mercury adorns great strength when it transits in a retrograde motion. Try to observe some of the remedies mentioned below to make the most of its strength and receive its endowment.