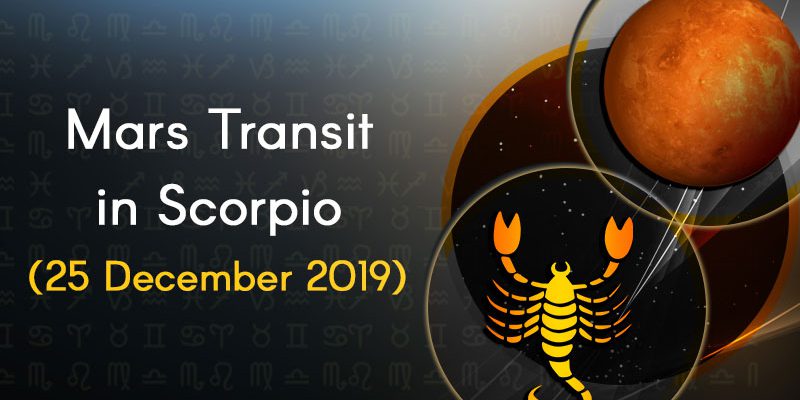 Mars transits in Scorpio on the day of Christmas! Know how this transit of Mars in Scorpio especially impacts the lives of these zodiac signs!

Mars is famously known as the red planet, and represents real estate, property and construction. It is fiery in nature, and associated with God Muruga, Lord Velayudham and Lord Subramanya. Hailed as the Commander-in-Chief among all Navgrahas, Mars rules Scorpio, Aries, and Mrigshirsha, Dhanistha and Chitra Nakshatras. A strong Mars instills fearlessness and courage in a native’s heart, whereas a malefic Mars can make a person stubborn and aggressive.

Planet Mars In A Kundli

Although said to be an inauspicious planet, planet Mars offer favourable results based on its placement in a kundli. It tells about one’s siblings and rules the eighth and first house as per Kaal Purush Kundali. A strong Mars gives the native courage to deal with stressful situations bravely. They develop good leadership skills and act independently. A sense of adventure can originate within them. However, sometimes Mars-ruled natives do not welcome suggestions or advice. On the other hand, an afflicted Mars makes a native quarrelsome, temperamental and aggressive. Wear Anantmool root to pacify the Planet Mars, and chant Hanuman Chalisa every Tuesday.

Establish Mangal Yantra to Strengthen the Position of Mars

Connection of Mars With Marital Life

In Hinduism, it is very common to evaluate the placement and influence of planet Mars when examining one’s kundli for marriage purposes. Any sight of Mangal Dosha forming in one’s birth chart can lead to obstacles in married life, mangal Dosha is formed when the planet Mars is posited in the 12th, 1st, 4th, 7th or 8th house from Lagna in a kundli. Getting rid of Mangal Dosha by performing useful remedies helps to ensure marital compatibility between partners in the future. In case Venus or Jupiter aspects Mars in a birth chart, the effects of malefic Mars can be curbed.

Know If You Have Manglik Dosha In Your Kundli: Mangal Dosha Report

This transit of Mars in Scorpio is taking place on the day of Christmas, i.e. 25 December, 2019 at 20:26. As per calculations, it will remain posited here till 02:45 on 8 February 2020, Saturday, and then move ahead in the next sign. This transit will lead to major transformations in the lives of some natives. However, to attain propitious outcomes, appease Lord Mangal by chanting the the Mangal Beej Mantra:

The transit of Mars will take place through your eighth house. In this duration, you may face difficulties in attaining your goals. You may also feel that the people who do not want to see…..Read More

The seventh house will host the transit of Mars while in its transitory motion. This specific house provides about the impending partnership ventures which…..Read More

The significator of courage and might, Mars will be transiting in the sixth house of Gemini natives. Consequently, you will obtain positive results in many spheres of life. Certain changes…..Read More

The fifth house of Cancer natives will be occupied by the red planet during its transit. It will bring the gift of positive energy in your life and you will be able to complete your tasks on time. If any assignment…..Read More

Mars will be transiting in your fourth house, which is why it is necessary for you to remain cautious all this while. Negative circumstances may be encountered but you should always…..Read More

The red planet will launch in the third house of your zodiac sign, which also happens to be the house of might and courage. This transit will prove to be quite promising for you. Married natives will obtain…..Read More

The planet Mars will move through your second house. This particular house is also hailed as the house of income. One’s speech is also navigated through the aid of this house only. Moving…..Read More

As the transit of Mars is primarily taking in your zodiac sign, it will remain posited in your ascendant or first house. It is known as the house of self and provides information…..Read More

The twelfth house of your zodiac sign will be hosting the transit of Mars. During this transit, you are likely to face mental tensions which will create hurdles in getting things done. During…..Read More

The planet Mars is transiting in the eleventh house of your zodiac sign. Hailed as the house of profits, the red planet’s transit in this house will prove to be beneficial for more than one aspect…..Read More

The tenth house of your sign will be resided by Mars during its transitory motion. One’s profession or Karma is signified by this house. As the red planet enters this house, your confidence…..Read More

The house of religion, i.e. the ninth house will be occupied by the planet Mars during its transitory motion. Your intelligence will be questioned during this period of time. To…..Read More