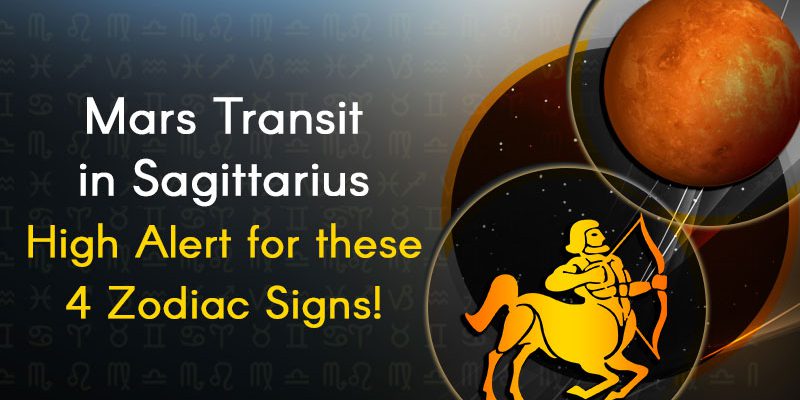 On the 8th of February, Mars is transiting for the first time this year. This transit will take place at 2:45 AM in the morning( after the mid-night of 7 February, 2020) and the red planet is entering the ninth sign of the zodiac circle, which is Sagittarius. In this particular sign, a grand conjunction of Jupiter, Mars and Ketu will come into being. In such a situation, a different kind of folie will be seen in many people under the influence of these three planets. On the other hand, various astrological calculations also suggest that some unfortunate events can take place in the country because of this transit’s incipience. Adding to this, the nation may also witness ups and downs in the economy.

Know What The Year Has In Store For You: Personalized Horoscope 2020

On this note, let us take a look at what this transit has in store for individuals belonging to various zodiac signs. As it has been said natives registered under 4 signs must remain careful. So, which are these four signs. Let’s scroll down to know it at the earliest. Also, do not forget to go through the effective remedies mentioned with the detailed transit prediction for every sign, so as to combat the harsh effects of this fiery planet.

So, let us move on to the signwise predictions now!

Along with being the ruling Lord of your ascendant house, the planet Mars also governs your eighth house. In its transit duration, this fiery planet will enter your ninth house. Under the influence of this planetary movement…..Read More

For Taureans, Mars is the ruling Lord of seventh and twelfth house and in this transit duration, the red planet will be entering your  eighth house. In this manner, the impact of this transit will…..Read More

The transit of Mars will take place in your seventh house. The same planet also happens to be the ruling Lord of your sixth and eleventh houses. Under the influence of the planet’s transit, your business ventures will….Read More

For Cancerians, Mars happens to be the ruling lord of your tenth and fifth houses and it plays the role of a Yogakaraka, when it comes to these houses. While its transit movement into Sagittarius, the red planet will be seen moving into….Read More

For your zodiac sign, the transit of Mars will take place in your fifth house. This particular planet is Yogakaraka one, being the ruler of your ninth and trine houses. Moving on, the transit of the fiery planet will prove to be quite…..Read More

For the natives belonging to the zodiac sign Virgo, Mars happens to be the ruling lord of your third and eighth houses. During its transit in Sagittarius primarily, it will move through your fourth house. Under the influence of this transit, the situations in your household will…..Read More

For Librans, the red planet is the ruling lord of second and third houses. Known as a ‘Marak’ planet, Mars will move through your third third house. Usually, the transit of Mars in the third house generates auspicious results. Let’s see how this one turns out…..Read More

Along with being the governing planet of your lagna house, Mangal or Mars also rules over your sixth house and during its transit duration, it will move into your second house. There will be a noticeable change in your…..Read More

For your zodiac sign, Mars is the ruling lord of your fifth and twelfth houses. During this particular transitory movement, its presence will be primarily seen in your first house. Hence, you will remain under the optimum effect of this transit because of Mars moving into your….Read More

For your zodiac sign, Mars is the ruling lord of your fourth and eleventh house. It also poses threats for certain natives of this zodiac sign. In its transit duration, it will be moving through your house of expenses, which is the twelfth house. Your expenses may…….Read More

Talking about the last sign of the zodiac circle, for whom Mars is the ruling Lord of their ninth and second houses. During its transit into Sagittarius, the concerned planet will move through your tenth house. Consequently, you will remain at the receiving end of…Read More