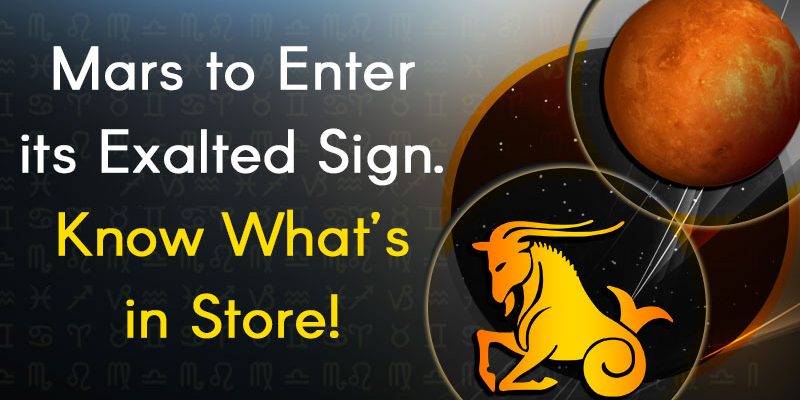 On the 22nd of March this year, the red planet Mars will move out of Sagittarius and enter its exalted sign, Capricorn. This transit will take place on Sunday at 13:44 in the noon. Since, Capricorn is the exalted zodiac of Mars, its strength will increase to a great extent during its residency in this sign.

If we take Vedic astrology into consideration, then it mentions that there is a significant relevance of worshipping the planet Mars. It has been said that one can gain redemption from some excruciating loans, if he/she worships this particular planet with a devoted heart and mind.

Usually astrology condemns Mars as an inauspicious planet. But, once it dons a favorable state, the planet thrives to fulfill many of your unfulfilled desires. Mars comes under the governance of the fire element and during its transitory motion, it will be entering a zodiac sign, which is determined by the  earth element. Consequently, the influence of this planet will increase.

If the planet Mars remains in a debilitated state in one’s Kundli, then it creates some problems for the natives. Under its influence, many others may also fall prey to an accident. Hence, it can be said that a debilitated Mars can a person’s domestic life also suffers due to the weak condition of Mars. This transit of Mars will have an effect on all zodiac signs. Let us know what will be the effect of this transit of Mars according to your zodiac sign.

For natives belonging to the zodiac sign Aries, the planet Mars is the ruling kord of your ascendant as well as eighth bhava. During the transitory movement, this fiery planet will enter your…..Read More

The twelfth and seventh houses of Taureans come under the lordship of Mars. During its stay in Capricorn zodiac sign, the fiery planet will enter your ninth house. This planetary movement will……Read More

For Gemini natives, Mars happens to be the ruling lord of your sixth and twelfth houses. During its stay in its exalted sign Capricorn, the fiery planet will move through your…Read More

For your zodiac sign, the fiery Mars happens to be a Yogakarak planet as it rules over your tenth and fifth houses. Now, this particular planet is transiting into your seventh house and it will bring…..Read More

For your zodiac sign too, Mars happens to be a Yogakaraka planet as it rules over your center and trine houses, which are the fourth and ninth houses respectively. During its stay in Capricorn zodiac sign primarily, the red planet will move through your…..Read More

For Virgo natives, Mars is the ruling lord of your third and eighth houses. Now during its transit in Capricorn zodiac sign, the red planet will move through your fifth house. Under the influence of this transit, you will acquire unlimited…..Read More

For Librans, the red planet is the ruling lord of second and third houses and during its transitory movement, Mars will enter your fourth house. Under the influence of the transit, some problems main crop up on the domestic front. If your…..Read More

No matter which zodiac sign the planet is entering, its transitory movement affects your life in a profound manner because it is the ruling lord of your sign. Additionally, it also rules over your…..Read More

For the ninth sign of the zodiac circle, the planet Mars happens to be the ruling lord of your fifth and twelfth houses and during its transit duration, the red planet’s presence will be seen in your second house. Consequently….Read More

For this particular zodiac sign, the planet Mars is the ruling lord of your fourth and eleventh houses. Now, the red planet will primarily transit in your sign, which means that it will enter your first house. Because of this…Read More

For the second last sign of the zodiac circle, Aquarius, the planet Mars is the ruling lord of its third and tenth houses. Now, during its transit in the tenth sign primarily, it will move through your….Read More

Mars is the ruling lord of the second and tenth houses of Pisceans, who are registered under the last sign of the zodiac circle. It’s presence will be seen in your eleventh house, during its…..Read More