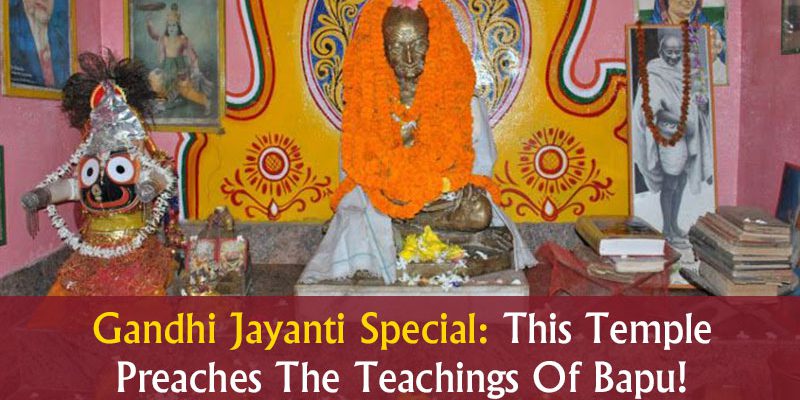 Today, on 2 October, the entire nation is celebrating the birth anniversary of Mahatma Gandhi, the father of the nation. Mohandas Karamchand Gandhi or M.K. Gandhi was born on 2 October 1869 in Kathiawad, Porbandar. Although several statues of Mahatma Gandhi have been installed all over the country, it is astonishing to know that there is a temple dedicated to Bapu, where he is worshipped every day, and his sermons are recited. Let us know where this famous temple of Bapu is located.

The temple dedicated to Mahatma Gandhi is located in Bhatara village of Sambalpur district, Odisha. Here, Bapu is devotedly worshipped, and his teachings are preached among the common folks. The statue of Bapu installed within the temple premises is about six feet high, which also comprises of a statue of Bharat Mata and Ashoka Pillar.

The locals here believe that in the year 1928, Mahatma Gandhi visited this village and explained the villagers the meaning and significance of independence. It was only after this that the villagers collectively came together to get a temple dedicated to Gandhi Ji constructed. Based on several ancient evidences, Mahatma Gandhi also made the people aware of social evils like untouchability.

This Is How Bapu’s Temple Was Created

It is believed that the initiative to build Mahatma Gandhi’s temple was first taken by Abhimanyu, the Gandhian leader of Odisha. He laid the foundation for this temple in the year 1971 with the help of the villagers. For the construction of this temple, all the villagers donated according to their capability. This temple of Bapu finally got completed on 11 April 1974 and was inaugurated by the then Chief Minister of Odisha, Nandini Sathapati.

Gandhi Ji is daily worshipped by his followers in this temple located in the Bhatara village of Odisha. Along with this, Bapu’s teachings are also recited here everyday. Mahatma Gandhi has narrated the realities and struggles in various walks of life, and the same is preached to the local children as well as villagers. The temple is especially decorated with flowers on Gandhi Jayanti, Republic Day and Independence Day, and the statue of Bapu is venerated with a devoted heart by the natives. An aarti is also sung by the natives present. On a special occasion like Gandhi Jayanti, people from far come and visit this temple of Bapu.