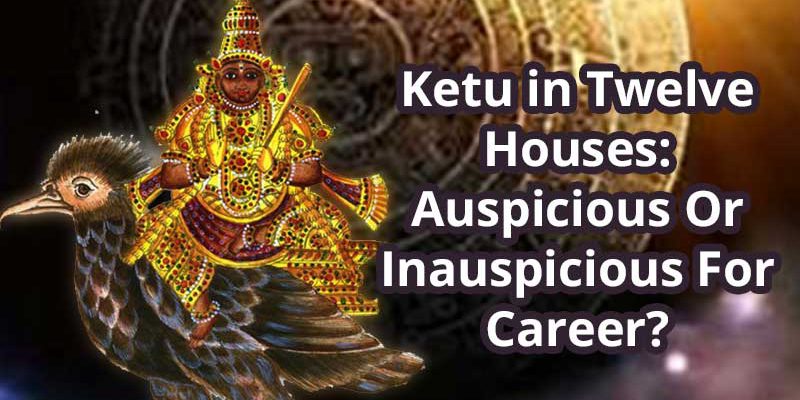 In astrology, the placement of planets in a kundli of a native determines his/her career in life. The influence of a planet helps to shape one’s career and guides him/her on the right path. In regards to this, CogniAstro Report comes in handy when you wish to know the suitable career choice for yourself based on your personality and planetary influences.

You can also Ask a Question related to your career and get astrological guidance from a professional astrologer regarding favourable career choices based on the placement of planets. Now let us talk about the shadow planet Ketu, its presence in a kundli and impact on the career and professional life.

The Navagrahas, i.e. the Sun, Moon, Mars, Mercury, Jupiter, Venus, Saturn, Rahu and Ketu move around in a kundli. Out of them, the Planet Ketu is known to be a shadow planet, but its presence in any house of a kundli influences the factors associated with it. According to Indian Astrology, Rahu and Ketu signify the two points of intersection of the orbiting paths of the Sun and the Moon, which lie opposite to each other on the opposite side of the Earth. Since these planets are not celestial bodies, they are called shadow planets.

Ketu in Hindu Astrology is a symbol of spirituality and paranormal/para-natural activities. This planet is a benefactor of logic, intelligence, knowledge, stoicism, imagination, insight, aggression and other mental qualities.

It is believed that Ketu brings prosperity and happiness to his devotee’s family. As per astrological calculations, Ketu is considered as a neutral planet and rules over the Ashwini, Magha and Mool Nakshatra. Along with Rahu, Ketu forms the Kal Sarp Dosha in one’s kundli. Ketu is considered to be exalted in Scorpio and Sagittarius and debilitated in Taurus and Gemini.

With this article, we will tell you how Ketu can affect your career if present in different houses in a kundli. You can also opt for a Career Counselling Report crafted by AstroSage that directs towards the right career path.

Want to live a luxurious life like a KING? Raj Yoga Report Reveals It All!

Ketu in the First House

If the shadow planet Ketu is present in the first house of a native’s kundli, then he/she attains satisfactory achievement in any business or service industry. He/She is knowledgeable, has a sharp memory, is a strategist, fortunate, has a muscular body and an intellectual mind. With an auspicious Ketu, a native can become a secret informant of a politician, and earn huge amounts.

Ketu in the Second House

Due to the presence of Ketu in the second house of a native’s kundli, then he/she pursues a business venture related to travelling. He/She is obedient to his/her parents and Gurus, earns money from numerous kinds of businesses, and can start any business in partnership.

Ketu in the Third House

If the planet Ketu is placed in the third house in a native’s birth chart, then that person is lazy by nature and procrastinates every task. It is because of this trait that such a native loses out on several opportunities in life. Such a native seeks financial benefits and business-centric and promotional advice from his/her sisters and finally starts his/her own business and earning a good livelihood.

Ketu in the Fourth House

If Ketu is in the fourth house in the birth chart of any native, then such a person earns money through business, gains profit from animal service, is interested in carrying out religious works or singing and music and is a good speaker. But often it deprives a person of happiness.

Ketu in the Fifth House

Ketu in the fifth house of a kundli makes a native a good political leader. Such a person leads the society towards its betterment and development. Such a person is artistic by nature and works in the areas related to drama, entertainment, music, dance, Stock Market and so on. Such a native can be the owner of a party hall, which organizes different kinds of parties and get-togethers.

Ketu in the Sixth House

If the planet Ketu is situated in the sixth house of the birth chart of any person, then such a native is likely to become a good social worker, judge or lawyer and earns his/her livelihood through his/her own business.

But often, he/she is troubled by diseases and enemies. Such a person remains serious in his/her studies and focuses well to attain good marks. In case you are also looking out for a suitable career to prepare for after your tenth grade, you can opt for CogniAstro Report.

Ketu in the Seventh House

If Ketu is in the seventh house of the birth chart of any person, then such a native develops sinful thoughts, remains ill due to excessive sexual habits and suffers from health troubles. He/She gains money through his/her spouse or anyone of the opposite sex, or works abroad or in a MNC. Such a native can start a business in partnership to rep maximum benefits.

Ketu in the Eighth House

If the planet of Ketu is in the eighth house in a native’s kundli, then such a native possesses either a weak or strong body and gains mixed results in different areas of life. Such a person feels deprived of any luxury despite having a prolific financial background and may think of earning his/her livelihood through sinful activities. Such a person either plans his business strategy with friends or gets into a partnership with them.

Ketu in the Ninth House

With Ketu in the ninth house of one’s kundli, he/she is devoid of addictions, has a religious tendency, is a scholar and philanthropist. Such a native lives his/her life by supporting others and doing good for them. Such a person is often seen carrying out social work for the welfare of others and religious activities.

Ketu in the Tenth House

Ketu in the tenth house of one’s kundli makes a native a humanitarian, philanthropist and full of charitable thoughts. Such a person is most likely to work at a charitable or correctional institution, prison, refuge and hospital. Such natives work in the field or ministry associated with criminals, spies, secret forces etc.

If you are also intrigued about your future and wish to know what career/course to choose from after your school, you can take the assistance of CogniAstro Career Counselling Report and get accurate solutions.

Ketu in the Eleventh House

If the planet Ketu is in the eleventh house of the kundli, then that native is capable of carrying out tasks, fulfills his/her desires with the help of others, determined but doubtful, low-tempered, carry out lowly activities, has a high pain tolerance, and earns his/her livelihood through gambling.

Ketu in the Twelfth House

If Ketu is in the twelfth house of a native’s kundli, then such a person can become a social service worker. He/She fails to attain success even after working hard and running a business, is hard working, foolish, anxious, mellow, insidious and lowly. Such a native is often travelling abroad or gains monetary benefits from overseas.

The above details shed light on the impact of Ketu on the career choices of natives and the outcomes attained from it. For particular results, it is absolutely necessary to analyze the horoscope according to the time, date and location.

Thank You so much for connecting with AstroSage. Stay safe and stay healthy!!