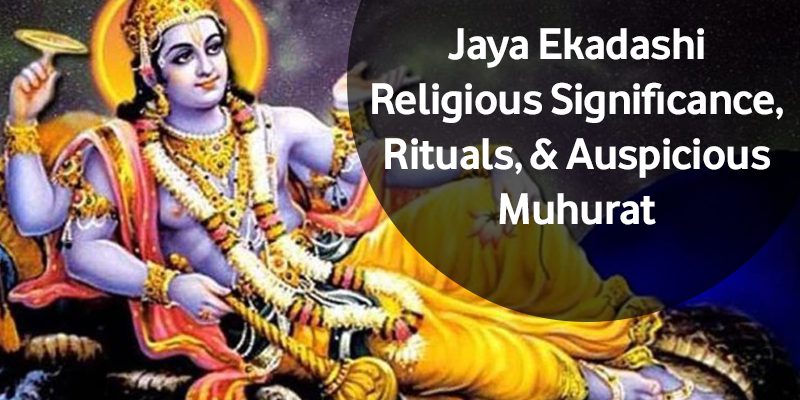 According to the Vedic Panchang, Jaya Ekadashi falls on the eleventh day of the Shukla Paksha of the Magha month every year. Lord Krishna himself once mentioned the importance of the Ekadashi falling in Magha Shukla Paksha, and said that this day offered many auspicious results and virtues to the natives. Many people even believe that praying on this day helps one get rid of any ghosts, demons, and evil spirits that may have been surrounding them. Moreover, anyone who fasts on this day can get freedom from major sins like the death of a Brahmin. A person who does the Jaya Ekadashi fast always has the grace and blessings of Lord Vishnu.

Get A Glimpse Into Your Future: Personalized Horoscope 2020

When Is Jaya Ekadashi?

As mentioned earlier, Jaya Ekadashi falls on the eleventh day of the bright fortnight of the Magha month of Hindu Calendar. As per the Gregorian Calendar, the event usually occurs during January-February, and this year, it will be celebrated on Wednesday, 5 February 2020.

Note: Parana is the auspicious muhurat when the fast comes to an end, and one opens it with proper rituals and prayers.

Note: This Muhurat is for New Delhi. Click Here to know Jaya Ekadashi Fast Muhurat in your city.

The Jaya Ekadashi mythological tale mentioned in the Padma Purana states that the King of the Devas, Indra used to rule Heaven, and all Gods and Goddesses lived there peacefully. Once, Lord Indra was doing the Gandharva Gaan in the Nandanvan (Nandan forest) with his nymphs (apsaras).

One of these Gandharvas was the famous Pushpadanta present along with his daughter Pushpavati; while another Gandharva, Chitrasen was also there along with his wife, Malini. Also in attendance were the son of the latter, i.e., Chitrasena and Malini, Pushpavaan and his son Malyavaan. Pushpavati became enamoured with Malyavaan and worked hard to get him under her spell, which she was soon successful in. Although these two were singing to appease Lord Indra; however, due to their infatuation, their minds were now befuddled.

Seeing these two lost in each-other, Lord Indra took it as his insult and cursed them “You Fools! You both violated my order, thereby, I curse you! Both of you will now go to Earth and reap the fruits of your karma as demons.”

On being cursed by Lord Indra, they both were sent to the Himalayas where they started living their miserable life. The cold there was so harsh that they could not even sleep. They would often talk and ponder upon the sins of their past life, that they no longer remembered, which had led them here, to this troublesome existence. In the meantime, Jaya Ekadashi came during the Magha month. On this day, both demons did not eat anything and did not partake in any evil deed either. After only eating fruits throughout the day, they went and sat under a Peepal tree in the evening. This night too, was so cold that they did not sleep.

The story goes, due to fasting on Jaya Ekadashi and staying up all night, the very next morning, they were freed from their Demon form (Pishach Yoni). When they recovered their beautiful appearances and returned to Heaven, Lord Indra asked them how they were released from their demon forms, to which Malyavaan replied, “Oh Lord! With the blessings of Lord Vishnu and the effects of the Jaya Ekadashi Fast, we were able to recover from our Pishach Yoni.”

This is the story that Lord Krishna recounted to Yudhishtir, and said, “Any person who has observed the Jaya Ekadashi fast has done equivalent to Yagna, Japa (chanting), and charity, etc.”

What Riches Does Your Kundali Hide? Get Raj Yoga Report Today & Know