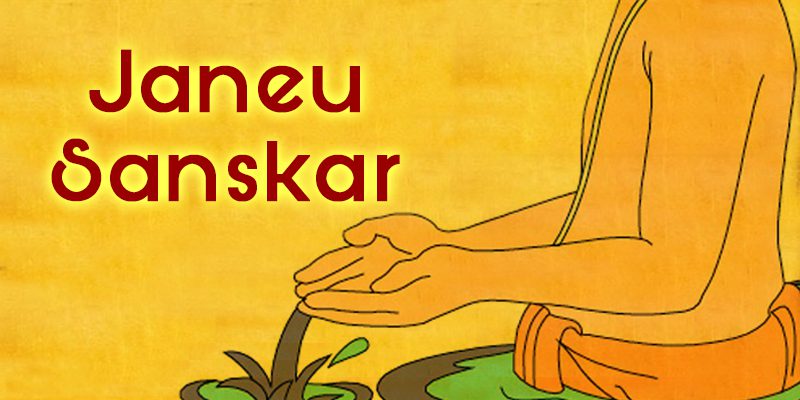 Janeu Ceremony holds high significance in Hinduism. It is one of the major sanskars amongst the 16 mentioned in the Hindu Dharmashastras. A janeu is a white colored, sacred thread made of three streams of threads, that is worn from the left shoulder towards the right side. This ceremony is known as Upanayana Sanskar in Sanatan Dharma, where upanayana signifies moving closer to God, while in Sanskrit, it is called Yagyopavita Sanskar. Yagyopavita is a blended word of yagya and upavita, which means getting the right to perform yagya/havan (fire sacrifice). Without completing this ritual; praying, studying, doing puja, business, etc. are said to be meaningless.

The Hindu Shastras state that after performing the Upanayana Ceremony, a child’s sins from his previous lives are cleansed. Consequently, it was believed that the child is reborn after this ceremony as only after completing this ritual does the child become religiously pious. In ancient times, a child was educated only after this was done, as it was believed that the Janeu Ceremony is crucial for the child’s growth and gaining knowledge.

The Right Time for Upanayana Ceremony

Generally, the Upanayana Ceremony is commemorated when a child moves from his adolescence to youth. According to the Dharmashastras, a Brahmin child must complete the ritual before completing 07 years of age, a Kshatriya before 11 years, and a Vaishya child must have the ceremony before he is 13 years old. More importantly, the ritual must be done before the child is of marrying age in any case.

Importance of The Upanayana Sanskar

When we consider the Upanayana Ceremony from the Religious perspective, it directly connects to Brahma, Vishnu, and Mahesh. The three threads of the janeu are said to be the symbol of Trideva. According to the Manusmriti, Brahma is the Creator of the Universe, while Vishnu is the Nurturer, with Lord Shiva being the Destroyer. This is why the Janeu is a sacred thread which must not be desecrated. In case it gets unholy due to any reason, then it should be immediately changed ritualistically.

The importance of the right ear has been described in the scriptures as well. Lord Aditya, Vasu, Rudra, Vayu, Agni, Dharma, Ved, Aap, Som and Surya resides in this ear, which is why even touching it with the right hand offers rigorous results. Five knot are made on the janeu thread, which symbolizes Brahma, Dharma, Kaam, Ardha and Moksha as well as five yagyas, senses and karma.

Janeu Ceremony in Other Religions

Janeu Ceremony isn’t celebrated in Hinduism but commemorated in other religions as well.

The ceremony of Upanayana is considered important from a medical point of view for a child. As per medical science, a nerve travels back in the back of a human being, which starts from the right shoulder till waistline. This nerve is critical in nature. Hence, in case if it remains constricted, the person doesn’t get involved in sensual activities or aggressive and Janeu enables the nerve to remain in that state only. This is why anyone wearing a janeu is said to be pious and develops humanitarian qualities.

According to a study, anyone adorning this sacred thread gets rid of Blood Pressure and Heart related diseases. This thread maintains blood flow in the body. As it passes through the heart, therefore the possibility of any heart related disease rising becomes low. Also, during urination, when we wrap the janeu around the right ear, it forms a pressure around the intestines, which is why one doesn’t feel constipated.

There are nine planets in astrology and affects the lives of a native in different ways. In the Janeu, there are nine single threads which symbolises the nine planets. It is believed in astrology that anyone wearing this thread gains blessings of the Navagrahas. Along with that, the white coloured thread signifies Venus planet, which denotes beauty, calm, comforts and luxuries and skills. Also, the yagyopavit is coloured yellow, which is connected to Jupiter. Jupiter signifies intelligence, religion, teacher and good acts.

This is How The Ceremony Is Conducted

We hope that the article about Janeu ceremony proves to be informative. Thank you for remaining connected with us.