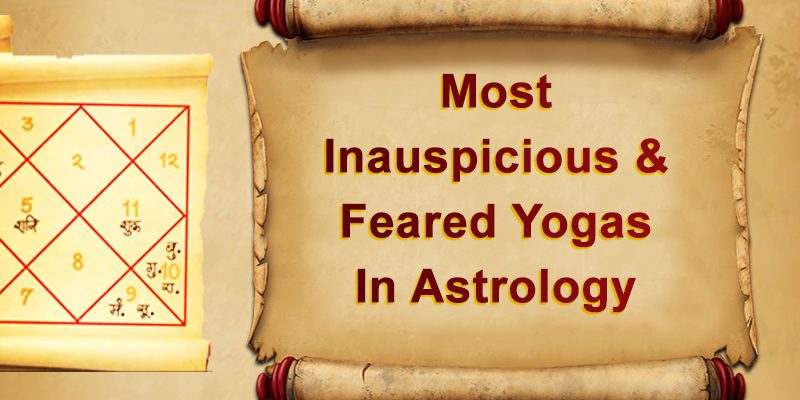 Several yogas forming in a kundli have the potential to change lives. Some of them are called Raj Yogas, which bless one with prosperity and success, whereas some are highly inauspicious, which give rise to problems and difficulties in life. Do you also wish to know if such yogas reside in your kundli? Click here and get a quick answer from our astrologer.

In Vedic Astrology, numerous yogas based on the placement of planets and nakshatras  are found, which are highly capable of influencing a native’s life. You know a lot about favourable yogas in a kundli, which is why today we have come up with some special planetary yogas which are counted as inauspicious in astrology. Their presence in a native’s kundli can increase the level of negativity in one’s life. On this note, Brihat Kundli also comes in handy and helps you understand the impact of planets, yogas and doshas forming in your kundli.

Let us move forward and know in detail about five most inauspicious and feared yogas in astrology and remedies to appease them.

Varahamihira has mentioned a lot about Kemadruma Yoga in his main book Brihajjatakam along with Mantreshwar Maharaj. According to him, with the impact of this yoga, a native becomes unhappy, malicious, poor and submissive. As per the shastras, a native suffers from various troubles and difficulties in life if Kemadruma Yoga is formed in his/her kundli. This yoga offers poverty, hardships, struggles and mental stress in life. Such a person grows up facing conflicts.

Chandal Yoga is formed in any kundli when Jupiter and Rahu are positioned together in any one zodiac sign or house, or they are related to each other in the kundli. The combination or conjunction of these two planets gives rise to Guru Chandal Yoga or Chandal Dosha, which is considered to be extremely inauspicious.

The influence of Guru Chandal Yoga is quite extensive. It exerts its influence mainly on one’s consciousness and knowledge, which leads to rising negativity in a person’s behavior. Adding to it, he/she can be seen surrounded by failures.

With the impact of this yoga, one remains deprived of comforts and leisures in life and faces excess troubles. Any native influenced by this Yoga attains a materialistic inclination and negative attitude in life. He/She can go to any extent to fulfill his/her ambitions and has a strong desire to earn money, where he/she doesn’t like to distinguish between what’s right and wrong. In such a manner, he/she suffers from character assassination and can develop a violent and fundamentalist approach under special circumstances:

Manglik Dosha is one of the most common and well-known doshas among natives, because it is known to give rise to innumerable problems in the marital life of natives. When the planet Mars is present in the first, fourth, seventh, eighth, or twelfth house or bhava of one’s kundli, then Manglik Dosha forms.

Due to the presence of this yoga, a native faces several sufferings in his/her marital life. He/She can face a delay in his/her marriage, constant dismissals, separation even before marriage, or physical, mental and financial loss even after marriage. You can get your own Mangal Dosha Report, find out if such a yoga is forming in your kundli and perform remedies to eliminate its malefic effects.

According to the Vedic Astrology, the formation of Angaraka Dosha occurs in any kundli when Rahu or Ketu is present along with Mars in the same house or bhava. Apart from this, this yoga can also when Ketu or Rahu aspects the planet Mars. Angarak Dosha is generally considered a bad and inauspicious yoga and source of innumerable problems in life. As per Vedic Astrology, this yoga is counted as one of the unfavourable and evil yogas. As per its nature, this yoga offers fiery or devastating results, and possesses the ability to destroy promising factors of the bhava or house it is formed in.

The impact of this yoga changes the nature and behaviour of that native, thereby making him/her more aggressive. This yoga impacts the decision-making skills of a native. He/She invites lots of troubles and problems in life due to excessive anger or accidents. Mars is known to be the benefactor of brother, which is why such a native fails to maintain a good relationship with his/her brother(s) and remains vulnerable to accidents. They remain under immense domination of their opponents or enemies as well, which generates high mental stress.

Vish Yoga forms in the kundli of a native when the planets Moon and Saturn are in conjunction or aspecting each other. Since the planet Moon signifies Amrit or Nectar of Immortality, it being aspected by Saturn forms the Vish Yoga.

It has been said about Vish Yoga that a person under its influence feels frustrated and disappointed with life. Such a situation occurs when one feels mentally, intellectually and emotionally handicapped. It means that Vish Yoga diminishes the visionary perception of such a native. It eliminates the auspicious fruits offered by a specific house where it forms in a kundli. It causes rifts in a relationship, the person can feel alone and can suffer from acute mental stress and depression.

Get Useful Astrological Health Remedies & Suggestions Based On Your Kundli: Click Here Now!